As predicted, August has been mega busy sales-wise and I sold 51 Seashell Mosaic Paintings from my beach stall and 3 more from the Gavalochori Gift Shop.  This is over double the sales I had for this period last year.  Demand has been so high for certain designs that I have not had the time to make more. 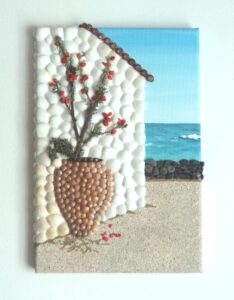 Popular again this summer – Greek Urn with plant – Seashell Mosaic Painting. I sold 3 of this design in August.

The weather overall this summer has been perfect compared to last year.  Not so many heatwaves and it has felt much ‘fresher’ thanks to the strong breezes.  Of these there have been plenty to cope with on my selling days!  Selling by the coast here does not come without its challenges, the biggest of them being the winds which often change direction and can arrive and disappear quite suddenly.  On some days I have had to reposition my car several times, to act as a windshield.  But I do not complain as these strong breezes keep me fresh and cool in the high temperatures. 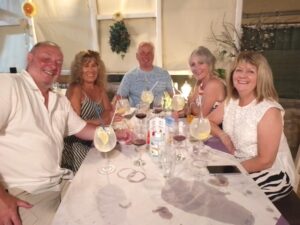 At Elpis – not a great pic as Rick & I have our eyes closed. Clockwise with Rob, Jayne and Gill

At the start of September my dear friends Gill and Rick arrived with Rick’s brother Rob and his wife Jayne.  During the short week they were here I was lucky enough to spend two wonderful evenings with them, enjoying dinner at Elpis in Plaka.  Sadly I wasn’t able to join them on the beach during the day as I was busy preparing and organizing my work for the coming 2 weeks that Zoe, Rich and Arthur would be staying with me.  But those two nights were the best, enjoying such good food and wonderful company! 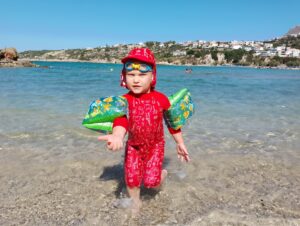 The first three days of Zoe and Rich’s holiday were spent on Almyrida’s various beaches and were especially wonderful with little Arthur, who has just turned three and absolutely adores the beach, like his Mum, Zoe!  We did a lot of paddling, exploring and building sandcastles.
As usual I set up my stall and sold on the Monday and in the early hours of Tuesday morning, Zoe and Rich got a taxi to the airport for their flight to Cyprus.  Zoe was chief bridesmaid for her best friend, Amy’s wedding and I was looking after Arthur for 4 days while they were away. 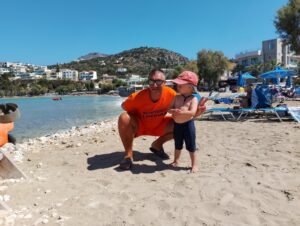 Arthur with Simon the Almyrida Lifeguard

So it was just my Grandson Arthur and me… and we had such fun!  We had three full beach days, eating lunch at Dimitri’s in Almyrida because there was a convenient children’s play area right on the sand next to the taverna.  But also it was near the lifeguard’s watchtower.  Simon – apart from saving a few lives (as witnessed by my friends Gill & Rick), has time for everyone including Arthur.  Simon made a big fuss of him, letting Arthur wear his lifeguard cap and whistle and after that, Arthur was in awe of him, bless! 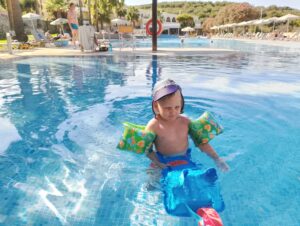 On the Friday when Zoe and Rich were due back, Arthur and I were just about to leave for Chania airport at 1pm when Zoe called to say they had missed their flight!  Without going into all the details – Athens airport and Aegean Airlines were both at fault and in the end they didn’t make it back until the wee hours of Saturday morning.  This meant they had to endure hours and hours of waiting at Athens airport and the extra expense of a taxi back to mine.  Nobody I know has had a stress-free travel experience this summer… as airlines and airports don’t give a damn about any of their customers anymore…
Such is the world we live in right now… 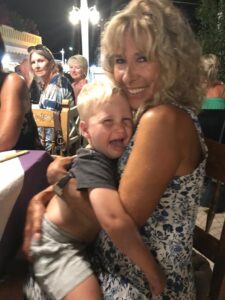 At Elpis in Plaka

There was no way Arthur and I were going to hang around my place all day, so we had a lovely afternoon at the large pool of the Almyrida Bay Hotel, where Emma, Ash, Ralph and Neve stayed last year.  Considering it was a pool and not the beach, Arthur loved it there and was never out of the water!  And this is where we all spent the Saturday that Zoe and Rich returned.  The only downside was the fact that we couldn’t eat there, so we had lunch at Franscoise then returned to the pool afterwards.  That night we had booked a table at Elpis in Plaka, where there was live music on.  The food there is so good and Carl Axon entertained us well, as usual.  Rich left a little earlier to take Arthur back and put him to bed.

At Kiani Beach Resort in Kalyves

The following day I drove them to the Kiani Beach Resort in Kalyves.  Zoe and Rich had booked all inclusive to stay there for the last 4 days.  As I helped them to check into their family room, I was also given a wristband and therefore able to join them for dinner on Tuesday and lunch on Wednesday.  Both these days Arthur and I went for long walks on the beach there, collecting rocks and shells and anything interesting for our ‘treasure’.  We dug a hole and buried it, only to dig it all up again the next day!  The Kiani Beach Resort has much to offer families with small children but the all inclusive drinks leave a lot to be desired!  There was no bottled water – only tap water and the soft drinks were far too sickly and very sugary!  The alcohol was totally suspect – watered down and un-branded.  It is advisable to pay more for the VIP all inclusive upgrade, where at least the alcohol is drinkable!  Otherwise – the facilities, rooms, service and food were all really good value. 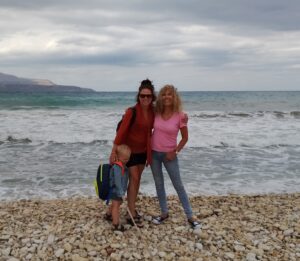 With Zoe and Arthur on Almyrida’s far stony beach – disappointing weather on the last day.

I collected Zoe, Rich and Arthur from the hotel on their last day on Thursday morning after it had rained heavily and was cloudy and miserable.  Sadly our plans to spend their last day on Almyrida Beach were scuppered.  So we settled for a bite to eat at Franscoise followed by a long walk around Almyrida and then Plaka, where we stopped for a drink at Totem.  Back to mine to shower and change for a final dinner at the Italian Pizza restaurant in Almyrida, before leaving for Chania airport at 9pm.  Their flight was due to leave at 11.30pm and was on time but caused major problems by landing at a different airport!  As I mentioned earlier, travel is a complete farce nowadays and they didn’t arrive home until 7.30am UK time which is some 7 hours later than they should have! 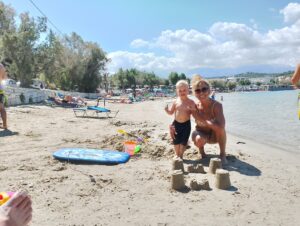 Travel-stress aside – Zoe, Rich and Arthur had a wonderful holiday and of course I had a wonderful time with them all too.  Yet again I have been so fortunate that all my family – all the grandchildren have come to Crete for their holidays again this year and made their Yiayia very happy indeed!

The next day I set up my stall to sell again – even though the weather was a bit iffy.  However, by the time the rain came at 12 noon, I had packed up after having already sold 7 of my Seashell Mosaic Paintings.  So far sales for September have been equally amazing and I intend to continue as long as the weather is good and the tourists are still here. 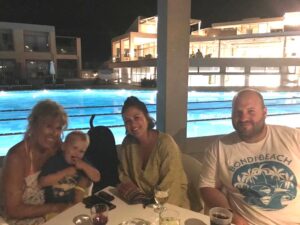 All of us after dinner at the Kiani Beach Resort

I have enjoyed a number of social events before and in between my family’s visit.  A couple that stand out are the charity gigs in Vamos Square and the Plakabury Charity festival which saw practically the whole of the village fill Plaka Square this last Wednesday evening.  We all danced so much and the atmosphere was amazing.  The bands – Three Little Birds and Phoenix were brilliant!  I think what makes these events so magical is that they are all in the open air and we are eating, drinking and dancing under the stars……
I’ve said it so many times before… I am so happy to be living here!