These past few weeks we have been enjoying some wonderful weather, especially for October and it is such a contrast to this time last year.  We had a really bad rainstorm in mid October which caused severe flooding on parts of Crete, but luckily not near me!  For the rest of the time it’s been lovely and warm with sunshine all day long! 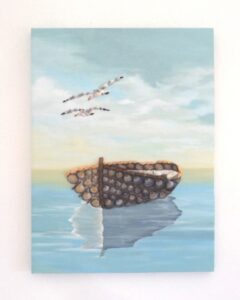 I finished my summer selling season by mid October because there were not enough tourists around Almyrida by then.  I sold another 51 Seashell Mosaic Paintings during September and a further 19 in the 4 days I set up my stall in October.  Overall the results this summer have been totally unexpected and my stock now has never been so low!  I ran out of so many designs that have consistently sold well this season.  Even by reducing my selling days from 3 to 2 a week – I couldn’t make enough to meet demand!  I am quite thrilled that my Seashell Mosaic Collage Paintings are still so popular.

So since I stopped selling and producing so much I have been out and about lots, while the weather is so glorious and I have more time.  The two walking groups have resumed their walks and I’ve walked in Maza and Deliana Gorge with the Happy Wanderers and Argrioupoli with David’s group. 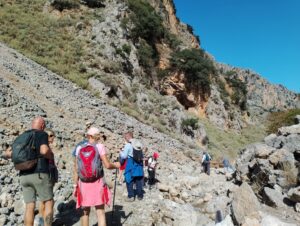 On the Deliana Gorge walk with the Happy Wanderers

All the walks were wonderfully invigorating and so scenic.  After not much walking in the heat of the summer months, I have welcomed the additional exercise these walks afford.  As for the amazing views at every turn… well I just love this beautiful Island!  I wish there was more room for photos.  A walking day is really a whole day out.  We start early and end up with a late and very long lunch.  Every taverna is different and most do not actually have much in the way of a menu – especially out of season and in these ‘out of the way’ locations.   The hospitality is beyond measure and we are frequently gifted extra treats, whether in the form of food or alcohol.  We are so satisfied at the end of our meal that we do not need to eat at all for the rest of the day!  Mind you we are usually all heartily hungry after our walks!  I always have to take plenty of snacks to keep me going for the 4 or 5 hours that we are rambling. 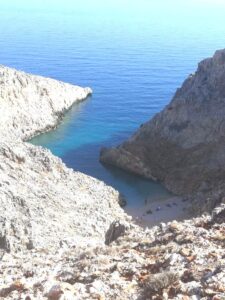 Last week I drove 3 of my friends to the other side of Akrotiri to see if we could access the ‘Glass Beach’ on foot.  This is quite an amazing little cove which is filled with sea-tumbled glass that my friends love to collect.  For 3 years we have been talking about hiring a boat to get there but with covid and other stuff going on, it’s been difficult to arrange.  I actually visited this beach with Matt in his speedboat back in 2014, yet Debbie looked on Google maps and reckoned we could drive so far and then walk down the cliff to the bottom.  When we arrived there it turned out to be another cove – a quite famous one called Seiten Limania Beach.  I couldn’t believe how many tourists were there and so many friendly goats came right up to us! Lisa, Debbie and Kathy didn’t seem bothered about climbing the long way down and then back up again – as neither did the majority of tourists there.  So we took some photos and then headed for nearby Stavros to spend the rest of the day there, collecting shells. 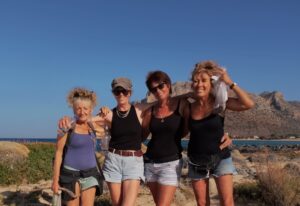 At a little beach in Stavros – with Debbie, Kathy and Lisa

Social events and dinners with friends have been a-plenty.  Penny and I had dinner in Plaka and she came with me to the ‘Libra’ Party that Neisha organized at Nikita’s in Almyrida.  That was a fun evening of all night dancing as there was a DJ, which made a pleasant change from a live band as the music was more varied. 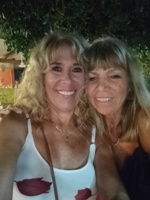 Night out with Penny

I enjoyed another lovely evening with my Norwegian friend Solveig, when we had cocktails at Happy Hour on the rooftop terrace of the Almyrida Residence Hotel, followed by an excellent – as always – meal at Thalami in Almyrida. 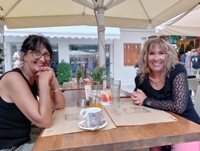 Lunch in Chania with Solveig

We also spent a day in Chania when the weather was a bit iffy, having lunch there before wandering around the harbour front and shops.  I was again amazed at how busy Chania was for October and recently learned that the Greek Tourist Minister declared this the busiest October on record. 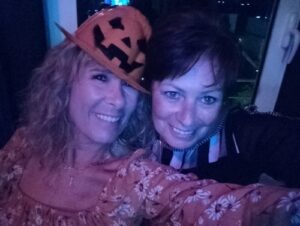 At the Halloween gig in Kalyves with Lisa

On Friday night I went to a bar in Kalyves where ‘Island Beat’, ‘The Vibes’ and one or two other musicians rocked the ‘Halloween-themed’ night away.  It was packed and a great night out.  So too was Lawrence’s party on the Saturday, held at his charming villa in the gardens and around the poolside.  Although temperatures drop quite steeply now in the evenings – we all dressed up warmly and enjoyed the music constantly being played on Lawrence’s amazing dukebox! 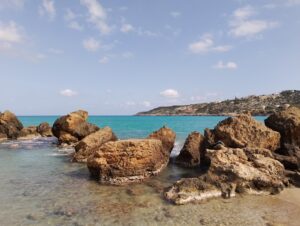 Almyrida – A photo I took on Sunday morning during a power walk to clear my head after all the drinking I did at the weekend!

This wonderful weather is set to continue until the weekend with warm temperatures of 25 degrees and so we all plan to visit Falasarna for the day on Friday. It may well be the end of the summer on this first day of November… but it doesn’t feel like that to me, as I sit on my beautiful balcony overlooking the sea and writing up this post…