The last 9 days have gone by in a whirlwind! I’ve enjoyed real quality time with my brother Mark and fun, games and laughter with my Niece, Honey and nephew, Ted. They arrived on their first ever visit to my home on Crete a week last Tuesday. The weather has been characteristically hot and sunny but has luckily always been accompanied by a good breeze, making perfect conditions for a lively beach holiday.

Mark had a serious accident three and a half months ago and is currently wearing an ugly contraption of metal rings, rods and pins which are attached to the lower part of his left leg. Sadly this meant that he couldn’t go into the sea or a swimming pool, although he was able to take a cool outside shower at all of the beaches we visited, which he found quite refreshing!

The day after Mark, Honey and Ted arrived I was back on the edge of the beach in Almyrida, selling and working on my seashell mosaics whilst they found nice spots on the sandy beach at the other end of Almyrida. When I’d finished working and had packed up the car, we had dinner in Almyrida and when we had returned home again, Mark and I taught Honey and Ted to play Canasta. This is a great card game that all my family have played all through our lives. Mark and I (being two of six siblings) were taught to play by our parents and we have all passed the game on to our own children. Honey and Ted are the youngest of all the grandchildren and so are the last to learn Canasta. They certainly were keen students! 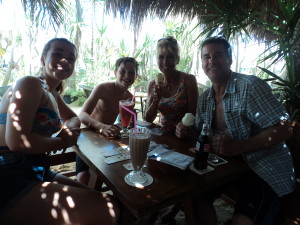 Canasta and Lunch at Mike’s Oasis in Georgioupoli

On Thursday I drove us all to Kournas Lake where we spent an hour or so swimming in the lovely warm lake before moving on to Georgioupoli for the rest of the day. We based ourselves at Mike’s Oasis and had a great day playing Canasta over lunch and then messing around in the sea afterwards. We left the beach at around 6pm to get showered and changed for the Caribbean Evening at Captain Jack’s. We found a lovely table on their seaside terrace, where a guitarist was playing, creating a relaxing atmosphere. The food consisted of three separate Mexican-style starters, a main course of Chilli Con Carne followed by a rich dessert, all of which were very tasty – my compliments to the chef, Angela! Even so, afterwards we visited Franscoise for sweet crepes, would you believe! At this rate I am hopefully going to gain a few pounds! 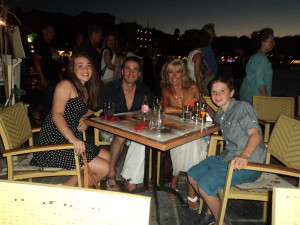 Dinner on the Harbour Front in Chania

Friday I was selling again and when I’d finished for the day we ate in Almyrida then went home and played a game of Canasta on the balcony. On Saturday we went to Kalives and spent the day on one of the sandy beaches there, under the shade of some large Cyprus trees (I think?). It was so comfortable and lovely there that we decided to ask the nearby restaurant if they would serve lunch to our sun beds. Happily they agreed and indeed, brought us some tasty food! We left the beach at around 5pm to return home for showers and change for an early evening in Chania. We ate dinner at a restaurant on the harbour front then had a wander down the narrow cobbled streets behind, where all the pretty boutique-style shops are. Honey bought a cute bracelet and I treated myself to an anklet because my previous one had broken. Mark took Ted off to shop for a Greek football shirt to add to his world team T-shirt collection. We ate ice-creams on the way back along the Harbour Front, and I showed them the Mosque where David and I hold our exhibitions. When we got home I dug out my keyboard and was truly amazed at how well Honey and Ted could play piano! For the remainder of the holiday, they both played it often. Honey played ‘Love Story’ and Sleepy Shores and because Ted played it lots – the Beetles song, ‘Eleanor Rigby’ will always remind me of the time I spent with them. 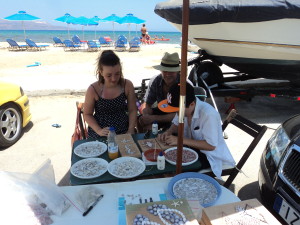 Mark watches while Honey and Ted make their own Seashell Mosaics

We had a great pool day on Sunday. Both the swimming pools at the Almyrida Residence and Beach Hotel were packed so we spent the day at the large Swedish Hotel. Here the pool is much bigger and deep enough in parts for diving. Mark sat down at the edge of the pool with his good leg dangling in the water, teaching Ted some cool dives and throwing balls to him to catch in the water. Honey and I joined him and we spent hours playing games and swimming. We indulged in lunch, drinks and ice-creams at the hotel and it was yet another great day out. In the evening we played more rounds of Canasta because Honey and Ted really love the game!

On Monday I was working in Almyrida as always, but this time I had company! With my help, Honey and Ted made their own seashell mosaics to take home as a memory of their holiday with me. They did really well too! Honey made a seahorse on sand and Ted made a little crab! Unfortunately, Ted had strained a muscle in his leg from all the jumping and diving he’d done yesterday and so he wasn’t able to go in the sea or play any games. After they had finished their pictures, Honey went back to the beach with Mark and Ted stayed to keep me company with his ipad. After I’d packed up we ate in Thalami, in Almyrida, then it was back to my apartment, shower and yet more Canasta! 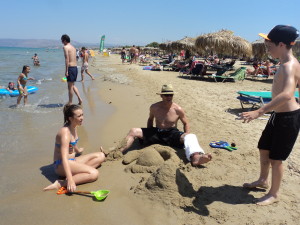 On Tuesday we returned to Georgioupoli at Honey and Ted’s request. We had lunch and played Canasta at Mike’s Oasis, then spent most of the afternoon swimming, playing ball games and snorkelling and Mark and Ted made strange shapes out of sand!  It was a fab day and we all really enjoyed ourselves. This past week I have been feeling like a big kid again! In the evening we walked into Plaka village square and had dinner at Elpis Restaurant.

All too soon it was the last day for Mark, Honey and Ted’s holiday. I was working on my mosaics in Almyrida whilst Mark took Honey and Ted scuba diving for the first time! Mark is trained to dive master level but of course wasn’t able to join them. Nevertheless, he was determined they should experience this wonderful activity. They were naturals, going under the sea and not coming back again until the 40 minutes were up! They absolutely loved it! I finished work a little earlier and we had a barbeque at home, for our final meal together. Oh, and we had to play a final game of Canasta too, of course! 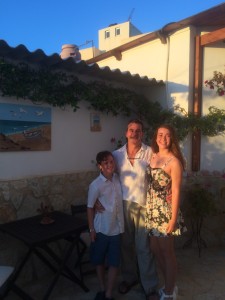 Mark, Honey and Ted in my courtyard

After taking them all to the airport on Thursday morning, the apartment once again feels a little empty and I miss them all. I am so grateful to have had this opportunity to spend such rare time with my brother and to get to know his children so much. Along with many other family visits, I will treasure these holiday memories spent with Mark, Honey and Ted… for always.