I’ve been so busy since Mark and the kids left, catching up on production of my Seashell Mosaics and Collages. They have been selling like hotcakes this August – thank goodness because sales for June and July were disappointing, due to a number of factors I think. The tourists that were here, were not spending much and it would appear that other local businesses and restaurants were reporting much the same. The Russians were noticeably absent because the value of the Rouble plummeted and two of their main tour operators went bankrupt! Seriously though, the Russians have been the tourists flashing the cash for the last few years. If I sell a picture to a Russian tourist, he will nearly always give me a 100 Euro note! Also the Greek newspapers have been reporting a 20% fall in tourism this summer, so there you go, perhaps this explains a lot. So I am really tied up with work right now, as is normal for August – the busiest month of my summer season. But I can only do what I can do and frankly, this blog has become lowest on my list of priorities – simply because I do not have the time to write it!

I am pleased to say that I have more family arriving here on Crete soon! Firstly my sister Leonie is flying over from Cyprus on Sunday and then my other sister, Karen and my Mum are both flying from the UK to Crete on Tuesday. We arrange this family get-together every year in rotation of each other’s homes. Last year we were all at Mum’s in Spain and this year it’s my turn to play host again. So naturally I am excited and looking forward to spending quality time with them all. 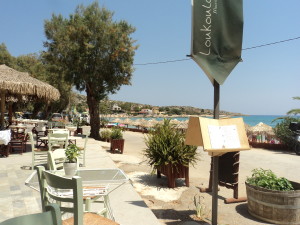 Marathi – from where Matt and I were sitting enjoying our drinks.

For the last couple of weeks, whenever I could make the time, I’ve been catching up with my new friend Matt. We met almost three months ago but I have been so busy with visitors and work that we have not been able to meet up often. Nevertheless we’ve had some truly memorable days out in his boat, exploring the coastlines. One Sunday we visited the little island opposite Almyrida, went inside the little cottage that’s built half into the hillside there and then went snorkelling round its small coastline. It was brilliant and these are just the things I really love doing! Afterwards we got in the boat again and headed for Marathi for beers, swimming, a late fish lunch and more swimming! Fab! After sundown, on the way back the water was calmer and I couldn’t believe how warm and comfortable I felt, standing in the boat with just my bikini on, speeding across the water!

Last Sunday we couldn’t risk taking Matt’s boat out because the sea was too choppy, so Matt took me on what I called a mystery tour – because he wouldn’t tell me where we were going. Of course I was guessing en route and realised we were heading for the south coast. I picked up a nasty cold and cough after Mark went back and poor Matt Caught it too! When we were descending the mountains my ears blocked up and I couldn’t pop them.  I was also feeling queasy in the car just before we arrived at Chora Sfakia. Anyway I thought that was the end of the journey, but I was wrong! Matt bought tickets for us to go on a boat to a place that could only be reached by boat, a place called Loutro. The boat wasn’t very big and the sea was choppy so you can imagine what came next?! Both Matt and I had to really concentrate on not feeling sick! Oh but when we got there it was so worth it! What a pretty place Loutro is, nestled into the mountainous coastline and only reachable by boat. We had a cool swim, drinks, a lovely fish lunch, a walk round and another swim among the rocks. Wonderful!

However, now I have to be super organised and prepare for all my visitors, especially as Zoe and her boyfriend Rich are arriving the day I take Mum and Karen back to the airport! It’s certainly all go at my place but I do love it when family come to stay and I can’t wait to see them all!