Despite being visitor-free for the last two weeks I have been keeping myself busy, in keeping with the full life I lead here on Crete. All through the summer, for three almost 12 hour days of every week I am situated at the edge of Almyrida Beach, selling my seashell mosaics and collages. Never wishing to waste any precious time, I am working on my mosaics in between chatting to tourists both new and those that return year after year. There are people I know who pass by and stop for a chat and the whole day has a real social feel to it. I really love my selling days because I get to meet so many lovely people from many different places. 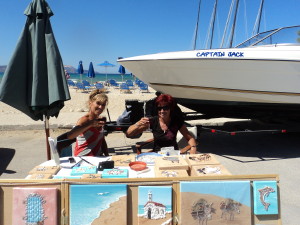 Lisa and I – courtesy of Captain Jack’s – with our wine infront of their boat!

Then there are the regular people who work in Almyrida such as Thomas who sells the tours and trips and Christo who takes care of the sun beds and boats behind me – to name but a few! The lovely guys, Mark and Hassan who work at Captain Jack’s and always bring me a glass of wine and a bottle of chilled water – with the compliments of Sophia and Ritchy. And as you can tell from the picture – I am even pitched infront of their boat, which on windy days gives me protection and shelter. If Lisa joins me they send over a half carafe of wine complete with two bottles of chilled water – how wonderfully civilised!  Lisa and I will often catch up like this for a couple of hours on one of my selling days as we are both so busy during the summer months. Lisa’s massaging business based at the other end of the beach has really taken off and she has more work than she can handle. 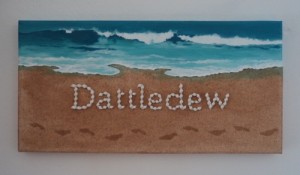 I don’t normally undertake commissions during the summer months but I made an exception recently when a customer wanted me to produce a house name plaque for her holiday home here. Originally I was to have completed this over the winter but had an incorrect email address for her and so I was unable to get answers to a couple of queries I had relating to the plaque. It turned out that she was staying in Almyrida for at least 6 weeks so I completed the signage last week, after Emma and Sophie had returned to the UK. I am happy to say that she was really pleased with it!

About six or seven weeks ago I made a new friend – someone I met, funnily enough, in Captain Jack’s! He has been asking me if I would like to go for a ride in his boat. We have had some really windy weather, on and off for several weeks and the sea has been way too choppy to take the boat out on the days I happened to be free. We did manage a trip across the bay to Marathi a couple of weeks ago but again, the sea was so rough that at times it felt like we were on a giant surfboard! Nevertheless, it was exhilarating and I really loved it! 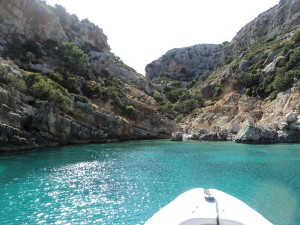 I loved it even more a couple of days ago when Matt called in the morning to say that the sea was perfect for a ride out and was I free? I had lots of canvas prep work to do but made sure I finished by 4pm. So we jumped on the power boat, sitting prettily in Almyrida’s port and headed off once more across the bay. Matt had told me that there were a few little beaches and coves along the coastline opposite, that could only be reached by boat and that it may be worth my looking to see if there were any shells to be collected there. Well I was in my element, this is what I absolutely love to do – Explore! There we were in this fab powerboat and we could just go anywhere on the water that we wanted to and I had a go at driving it too – feeling it’s power as we sped across the water!

We anchored just off one beach that was almost spooky! It was covered in beach glass and I couldn’t resist collecting as many of the turquoise blue and green glass as Matt’s shorts’ pockets would hold (because we’d swam from boat to shore I didn’t bring a bag!). But we also found three large dead birds there and the wind appeared to build up suddenly, swirling madly around the small cove because later, as we headed away from it, the wind died right down again. Strange.
So anyway we motored on to the next two coves, which literally took my breath away! The first was so beautiful and unspoilt and I believe the picture I’ve put up just doesn’t do it justice – you have to see it for yourself to fully appreciate it. The cove after that was also beautiful but sadly, full of Greek sun seekers who had climbed all the way down the steep mountainside to reach it. We didn’t bother swimming to shore to investigate, deciding instead to return much later in the summer when it might happily be deserted. 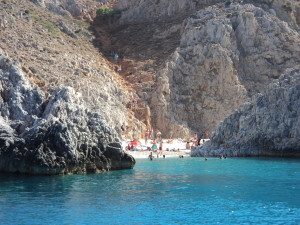 Another lovely sandy cove to explore later this summer

All this exploring had made us thirsty and so we headed back towards Marathi, where we anchored again and swam to shore, Matt swimming with one arm above his head to keep towel and cash from getting wet! We sat on one of the lovely beaches at Marathi and drank a couple of iced beers and I felt like I was on holiday! This is the wonderful thing about living in a beautiful place like Crete – that holiday feeling is never far away when you have the time to enjoy it! It takes about 15 minutes to get back to Almyrida and I savoured every wonderful moment of it, drinking in the different views in that lovely dusky light of early evening. That wonderful feeling of total freedom! Speeding along in Matt’s boat was truly exhilarating and made me feel really alive! I hope we get a chance to do it again soon!

Back on the subject of work again, I have spent quite a bit of time prepping up enough canvases to work on while I am selling and to cover the next few weeks. My brother Mark and his children Honey and Ted are arriving on Tuesday and I am extra excited because this is their first visit to my home in Crete. They will be staying with me for 9 days and as is usual, I have much to do to organise myself before then. I think it often enough but need to say it more – life sure is good!

One thought on “An Exhilarating Way of Exploring the Coastline!”