It’s been a while since I wrote my last post and as always, this is due to the full and wonderful life that I live here on Crete. Apart from August being one of the busiest months of my year, I have also enjoyed a two week visit from Zoe and Rich.

Although they were intent on having a relaxing holiday, Zoe and Rich filled their visit with a good mix of everything and returned to the UK happy and well rested. After collecting them from Chania airport on the Wednesday evening we stopped off at a newly opened restaurant in Almyrida called ‘AnneMarie’ (my Mum’s Christian name!) We were delighted to discover the range of food listed on the menu included plenty of fresh vegetables and alternative dishes beside the usual range of traditional Cretan Cuisine. It was a wonderful meal and a great start to Zoe and Rich’s holiday!

On the following evening I took Zoe and Rich to the last evening of the July Jazz Festival, held in the nearby town of Vamos. Set in an amphitheatre amid olive groves, the Greek jazz band that night played jazz as I’ve never heard it before. It really was quite amazing and we all thoroughly enjoyed the evening. 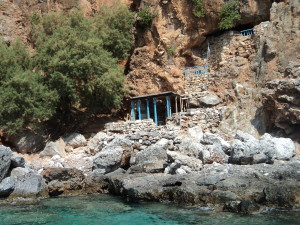 The cave that a Greek man called home for more than 20 years!

On the days I wasn’t selling we spent hours relaxing on the beaches of Stavros and Kalives as well as a day around the enormous pool at the Langley Hotel in Almyrida – where it made a refreshing change to walk on the soft grassy areas surrounding the pool. Zoe and I also went on the Dream Adventure trip available from Almyrida and which I would highly recommend if you’re looking for a two hour boat trip packed with interesting things to do and see along the rugged coastline beyond Almyrida Bay. The large speed boat takes a group of around ten people, first to all the interesting caves which were formed by waves and water coming from within the mountain and are accessible only by boat.  These caves were useful to soldiers and pirates and also used as storage for cheese makers because the temperature is almost always a constant 18 degrees celsius.  Then we arrived at one special cave where up until 2009 a Greek man lived happily for over twenty years before he met and fell in love with an English woman!  To reach this cave you jump off the boat and swim to some large rocks. After carefully negotiating your way over these rocks you reach the bottom of the camp. There the steep climb up the various ladders and stone steps this Greek man has constructed, leads you finally into this huge cave which he called home for so many years. Inside he has made table and chairs, benches, bunks for sleeping – set high up on natural rock ledges and even a little chapel. He had cooking facilities, a large water tank complete with sink and all the basics for living a simple but wonderful natural life. After exploring this unusual home we were taken to an area of aquamarine waters and given full snorkelling gear to explore for at least 45 minutes. Zoe absolutely loved this trip and even though I have taken it several times over the years, it never fails to impress me too!

I am happy to report that Almyrida, even as a small resort, boasts some truly wonderful restaurants and another relatively new addition called ‘CostAnita’ has definitely got my vote for its quality range and variety of top notch food and wines. Their fish platter for two is fast becoming legendary with every type of fish included and which is almost too much to eat! Generally, Almyrida has more than enough quality restaurants to choose from and would keep any visitor happily eating at a different venue every day for three weeks! After eating out we would end up at Captain Jack’s for a few drinks and maybe a game of Jenga. Of course we dined at home on some evenings, preferring a quieter night and playing Canasta on my balcony. Rich loves to cook and prepared a couple of delicious meals cooked on the barbeque. 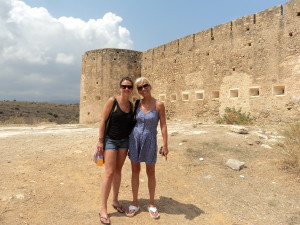 Zoe and Rich were interested in seeing some ancient ruins so I took them up to the ancient city of Aptera where there are plenty of ruins and a huge fortress that sits high on the hill and can be seen in the distance from my apartment balcony. However, after reading all the information available in one of the buildings and wandering around for some time, we became seriously overheated and Zoe (who absolutely adores swimming in the sea) was pining for the beautiful cool of the ocean! We headed back to the coast and Kalives beach, where we instantly stripped off and dived into the refreshing water! Ahhh such bliss!

We visited another interesting building site, one that is much more recent though equally amazing in its own right!  It is in Kalives and is called ‘Koymos’.  It is the fantastic work of one Greek man, started in 1990 and is an original museum of buildings made of vibrant coloured stones from the Lefka Ori. This talented Greek man incorporated incredible mosaics into the structures to form a harmonious union of nature and the traditions of Crete – of both yesterday and today.  We had seen it a few times but Zoe wanted to show Rich and so after we had walked all around the site we stopped and had lunch there.  It is quite a beautiful place to hold celebrations or a wedding. 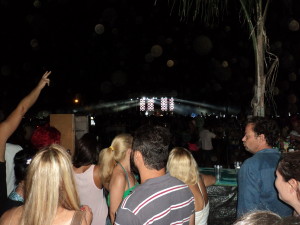 August is definitely the summer month for beach parties and we just couldn’t let the Kalives Beach Party go by without paying a visit. Kalives is a resort only ten minutes from Almyrida and boasts an enormous sandy beach. This particular event had been well publicised and over 7,000 people were expected to attend during the course of the evening, through the entire night and until around 7am the following morning! We arrived at around 10.30pm – just in time to watch the impressive fireworks display and we met several people we knew there and a few new ones too! There were some well-known Greek bands and music DJ’s that even Rich had heard of – pounding out some great dance music and we managed to get right infront of the stage and dance our flipflops off! I really should have taken more photos but as usual, was enjoying myself too much to bother! I still wish that I could learn how to post up videos because they would really show the atmosphere so much better but hey – when do I get the time? Anyway, we stayed until after 3am and left after having had a really great time! 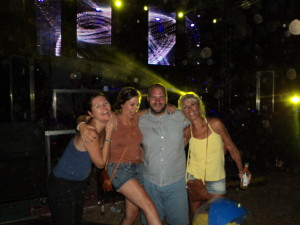 Dancing in front of the stage at the Kalives Beach Party

It was a truly wonderful two weeks of quality time spent with my eldest daughter Zoe and her partner Rich and luckily for them, when they left my apartment at the crack of dawn, their holiday was still not over as they flew to Athens for a two night stay near to the Acropolis. Thankfully it won’t be too long before I see them again in the UK, when I will be flying back in December to see my first grandchild – Emma and Ash’s baby – and spend another Christmas with my family.

Back in the present and August is still proving to be my best month for sales of my unique seashell mosaics and collages. I’ve also picked up three large commissions to do over the winter. However, weather-wise I was certainly in for a shock when I pitched up my stall and display last Friday. For almost two weeks there have been threatening thunderstorms and the air has been heavy with humidity. I honestly can’t remember an August that has felt this hot, even though the temperatures have been quite normal for this time of year. All morning the clouds were building and when Nick dropped by I asked him if he would nip back to my apartment and get the two large plastic sheets I keep in case of rain showers that may occur at the start of the summer season – but never in August! Thank God I did because soon after that, in the early afternoon the first few drops of rain started to fall and so I spread the covers over the whole of my table and displays just before the heavens opened and the rain lashed down! Everyone took cover in the surrounding Tavernas and the tourists could hardly believe their eyes! Together with the thunder and lightning, it rained for a long time and when the wind picked up too I had no alternative but to pile all my pictures into the car and write the rest of the day off. At least it wasn’t a total waste of my time as I made a few sales in the morning. Amazingly, these thunderstorms failed to clear the air and we had more rain and thunder on Saturday afternoon as well!

One thought on “August – the Month for Family Holidays”