Down by the beach in Almyrida it is hot, hot, hot! But selling conditions couldn’t be better and for the last month or so the breeze coming off the sea has been just perfect for keeping me cool whilst I work on my seashell mosaics. My summer office is quite idyllic and if I do get overheated then I just put up my ‘Back in 10 Minutes’ sign, grab my towel and go for a quick swim in the sea – how wonderful is that?!

Last Friday night a crowd of us met up at Nikita’s Beach Party in Almyrida. I’d packed up my stall at around 8.30 that evening and was happily dancing in the sand a couple of hours later! In fact I think I danced for at least 80% of the time I was there! The sound was fabulous along with the light show and we even got mist! But by far, the best thing about a beach party – for me – is being able to dance barefoot in the cool soft sand. It’s heavenly! There was a tourist couple there and they danced just brilliantly together and were a real pleasure to watch. They reminded me of how much I missed those Swing Rock/French Jive evenings I used to go to in the UK years ago. This couple were so enjoying themselves and like me, were dancing non-stop for well over an hour at a time. I loved every minute of it even though I couldn’t help wishing that I had a dance partner too. I took a few photos but they just didn’t turn out, sadly.

But it was a great beach party and no doubt there will be at least another two before the summer is out. There’s no chance of missing one either, because the music drifts up from Almyrida to my apartment on the hill up to Plaka! A few years ago when my friends Caroline and Tony were visiting, we had all been out for a meal and were chilling with nightcaps on my balcony. We heard all the music and saw all the lights on the far beach, and then we decided we just had to go down there and join in!

This is the first year in seven summers that I’ve had so few visitors to stay with me here on Crete. Of course next year – everyone will be coming for Emma and Ash’s big fat Wedding! But right now I am enjoying the build up to Zoe and Rich’s holiday visit in just a few days’ time, when they will spend two whole weeks with me! I am so excited and so are they! We are going to have such quality time together – as I did with Emma and Ash when they visited me in early May. Oh how I cherish these family holidays. 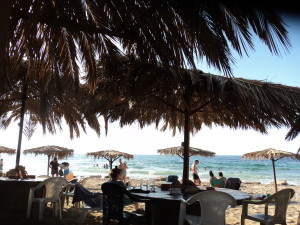 Last Sunday Nick and I spent a lovely day in Stavros.  I know I have mentioned Stavros in my blog before but have never been there when it was so busy!  The main beach was choca and so we decided to settle on the farthest beach which was larger but much less inhabited.  This beach is not sheltered like the smaller one and the waves were literally crashing in!  There was only a narrow gap between the rocks, in which you could get into the water safely but you had to time it right!  We were determined to ride with the waves and watched them for a while before plunging in when there was a relative calm.  Once we had cleared the break of the waves, we were riding rollercoasters!  It was exhilarating and great fun!  We later played a game of canasta while having a beer and some home-made iced tea at the beach bar.  On the way home we passed one of the very few Chinese retaurants we know of and had in fact only recently heard about it.  So we decided to stop for dinner there and see what it was like.  I wanted the Crispy Duck but when it arrived it was nothing like a usual Crispy duck because they had deep fried it! It was fatty and awful and not in the least bit crispy so I only ate four small pancakes. I complained and got a free sweet of banana fritters and ice cream. Nick’s choice was ok though and I’m sure it won’t put us off going again – I just won’t be ordering their crispy duck!

I am going to have to sacrifice my Sunday day trip with Nick this weekend because I really must whip my apartment into shape before Zoe and Rich arrive here on Wednesday. My art stuff is all over the living areas and everywhere is dusty. The floors are seriously starting to bug me and the courtyard desperately needs sweeping. So I am planning to spend my remaining two non-selling days on tackling all of the above and preparing for Zoe and Rich’s visit.