I got the Carnival all wrong because it only took place in Rethymnon and not Kalives as we’d first thought. I’ve been to the Rethymnon Carnival a couple of times and it’s a pretty big one with thousands of participators and visitors. All the Greeks really dress up and there is very loud music coming out of enormous speakers in the streets. The partying carries on all weekend. 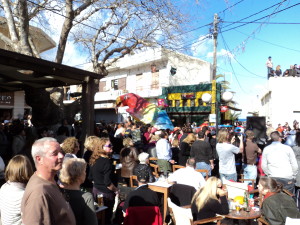 But the smaller version they normally have in Kalives which is only held on the Sunday, is just as good if not better. Because it’s closer to home you bump into loads of people you know – a little like the Almyrida Christmas Fayre. Sadly it didn’t look like Kalives was having one this year. Lisa and I were supposed to go to her uncle’s gig at the start of the Carnival in Rethymnon on Friday Night. But with one thing and another, we’d decided to stay closer to home and go to the Kalives Carnival instead and so we missed out! But what a lovely day today turned out to be!

Lisa and I decided to meet up anyway because it was a gorgeous sunny Sunday afternoon. We met in Almyrida and decided to go for a stroll around the village, where we bumped into lots of people we know, stopping to chat in the road or at the edge of one taverna or another. There were even some people in the sea and this is a day in February!  We bought a take-out coffee and carried on strolling to the end of the beach to the small harbour. We sat down on the harbour wall to admire the scenery, soak up the warm sunshine and of course, chat uninterrupted about each other’s news. We’d not had time to chat since last Saturday night’s gig at Georgoupoli. 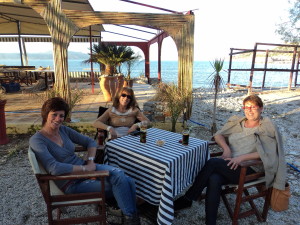 Lisa, Eleni and I – late Sunday Afternoon at Captain Jack’s

Lisa’s neighbour Eleni joined us late afternoon and we all strolled back up the beach to Captain Jack’s. There we ordered one of their lovely Dutch croquets, grabbing the only available table left in the sunshine. It was very pleasant and after the sun went down and it turned a little chilly, we went inside the bar and enjoyed ourselves for a couple more hours, listening to the karaoke singers, generally having a laugh and even trying on some new wigs and hats! 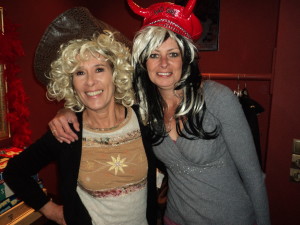 Lisa and I just can’t resist the wigs and hats!

I got home for around 7pm and watched Dancing on Ice. I used to love ice skating when I was a teenager and visited the ice rink with my friends every weekend for a while. But to sum up my Sunday – a little mosaic and sand work (done this morning), a stroll around Almyrida, a drink and a chat in the sunshine with friends followed by a relaxing evening watching TV – was just what I wanted and I enjoyed every minute of it!