The weather here in Crete has been just wonderful! Nearly every day has been sunny and warm, saving me money on Calor Gas bottles and hot water (which of course is heated by the sun through solar panels on the roof). So when the sun has crept onto my balcony in the afternoons – from then until sundown I have been working there most days.

I had a few choices for Valentine’s night – not romantic ones I might add! But it was Friday night, Lisa was up for a few drinks and so we settled on CJ’s. The place was packed with couples all laughing their socks off whilst playing an organised Mr and Mrs contest! We walked into the bar, greeting everybody as we passed them by and thinking – we wouldn’t be surprised if they all thought we were a couple! We went through to the back room where the bar is situated and realised then that we weren’t the only singles there, thank God! Ritchy and Sophia are very hospitable and their bar is so welcoming, always dressed up and adorned accordingly and everyone is usually offered little snacks during the course of the evening. Appropriately, on Valentine’s night we got a plate full of chocolate, jelly and biscuit hearts which we polished off in no time! 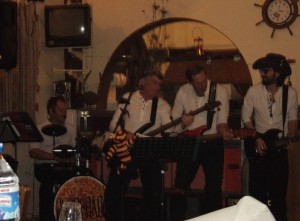 The following night, on the Saturday, Lisa and I were invited to another gig in a taverna on the outskirts of Rethymnon, featuring her Uncle Ron’s band – Desperado’s. Luckily we’d arranged a lift, as it’s a long drive and we wanted a drink or two again! When we arrived at the taverna we were given a meagre choice between beer or village wine (often strong stuff), so we didn’t drink too much and Lisa watered hers down with lemonade. But the food and service was good and the band were really good too, especially Lisa’s Uncle Ron who looked so cool and relaxed whilst playing his base guitar! We put in some serious dancing that night I can tell you!

The next morning, Lisa and I had pre-arranged a couple of walks around the village where she lives, in Gavalohori and then on to Vamos. I have been searching for the right reference material for a new design that’s been in my head for about a year now but so far,  I have not been inspired.  So off we went, me armed with my camera, walking up and down old, sometimes steep lanes and streets, already exhausted from last night’s dancing and drinking (thankfully I remembered to take a brufen before going to bed, so no hangover!) Lisa was struggling because she doesn’t usually drink wine only spirits. Oh but the weather was glorious again and the walks were lovely!
We were ravenous by the time we returned to Lisa’s and so she fixed us some meatballs with pasta for lunch and we sat very pleasantly in her back courtyard, in the sun and just relaxed…

These last two days have been a bit hectic work-wise but now I am sitting here on my balcony in the sunshine again, writing this up. It’s so peaceful at this time in the afternoon – I’ve just got Smooth FM playing softly in the background and I am pleasantly relaxed again.  You really do have to experience the busy times in your life to make the relaxing times you have, more pleasurable – wouldn’t you agree?