After Emma and Ash’s wonderful wedding on 2nd June – already over a month ago, life has resumed its normal pattern and I have been back in full swing with the selling of my unique seashell mosaics and collages.  Every Monday, Wednesday and Friday I am to be found sitting and working at the edge of the beach in Almyrida with my displays and work table.

Sales have not been that good and this could be for a number of reasons.  I do notice a pattern in the fewer number of tourists in June – every two years when the football is on and of course this year it’s Euro 2016.  But the biggest loss of sales in June has been due to the fact that David and I couldn’t have our usual exhibition at the Mosque in Chania this year.  I never had time to write about this in May, when it happened.  The recently appointed Mayor of Chania decided to call the Port Authorities office the night before all the artists were due to book, to say that he was installing an artist of his own choice for the whole of July, August and September!  So after having risen at the ungodly hour of 4am in order to secure a spot higher up in the queue, we had no chance of a week in June!  We were so disappointed! All the artists (most of them Greek) were up in arms and ready to storm the town hall to seek this Mayor out and demand an explanation!  David and I just decided to go and have coffee and a cake somewhere on the harbour front and then head for home.  But this is the first time in seven years that we have not had an exhibition in Chania and we are gutted!  Strangely though, that having not produced as many artworks this year – due to the move and the wedding – maybe it’s a blessing that there is no exhibition? 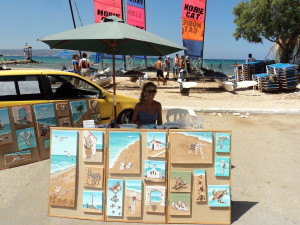 Also, I now have competition of sorts!  I can’t remember if I wrote about this last summer, but a Syrian guy who sells those mass produced paintings on loose canvas that you see all over Europe, had been spying on me and decided to pitch up his stall and sell in Almyrida too.  After much debate and argument involving Nikita, the previous mayor of Almyrida, it was decided that I should continue to sell on my designated days and he on the remaining ones.  The fact that he insists on setting up in the same spot as I do, has display panels similar to my own and has made frames to wrap the paintings around, just smacks of trying to copy me!  But he has also been lying to the tourists and telling them that his wife paints them!  When a young man approached me one day and said that he had bought a painting from my husband – I was fuming!  Nevertheless you just cannot compare the art!  A situation arose a couple of weeks ago, when I decided to sell on the Thursday because the weather was iffy and it was very windy on the Wednesday.  I got down to Almyrida early – only to find him already set up in my spot.  After much frustration I was able to make space right next to him and thought to myself, ‘this has happened for a reason and it is going to be good for me!’ My hope was that the tourists who visit Almyrida will see the difference in quality and recognise the uniqueness of my artworks.  By the end of the day I had sold lots of seashell mosaics and he had sold none!  Such is the power of positive thinking!

On my selling days I see many people I know, out and about in Almyrida and this gives me a chance to catch up with them and chat about current affairs.  The big topic of conversation of course, has been about the EU Referendum and Brexit.  Not wishing to state any political opinions in this blog, I can only say that the future right now appears to be very uncertain for all citizens of the UK at home and abroad and I suppose only time will tell.

At home I have been super busy with prepping up enough artworks in advance – to work on during selling days in the next two weeks.  My oldest and close mate Fran is coming to stay with me on Tuesday.  Naturally I want to be able to spend the days I don’t sell, having some fun and getting out and about with Fran – because I have earned it!  Since Mum left Crete I have been putting in eleven hour selling days and the same in terms of artwork hours at home.  The weather is hot, hot, hot and saps your energy sometimes so I need to slow down and rest a bit.

I have yet to experience a full summer in my new home so I am still making slight adjustments to cope with the high temperatures.  When I am working, a fan has proved useless when painting or gluing sand, as it dries everything super fast.  Luckily my new home has air conditioning, though not in every room.  I do not have the added insulation of an apartment above and at the side of me, as I am in a stand-alone house with a flat roof.  However, the landlady did tell me that she had had the roof insulated, so we’ll see if that makes a difference.  After Fran has gone I will decide which air conditioned room is best for me to work in when it’s really hot.

I did manage to squeeze in a free day last Sunday, when Nick and I went to Georgioupoli.  I picked a few seashells; we had a lovely lunch at a beach bar and played three games of Rummikub afterwards.  It was a totally relaxing day – wonderful!  Now I am really looking forward to Fran’s visit and some more relaxing days, with lots of fun and laughter too!