Since Fran returned to the UK, having spent two whole weeks with me – I’ve been running around like a headless chicken, in an effort to catch up on production of my unique seashell mosaics and mixed media art! I am now well into the busiest part of my summer selling season and that means I must work countless hours during the days I am home, in order to produce enough artworks to meet demand. During the two weeks Fran was here, we went out every day I wasn’t selling and what a fab time we had too! 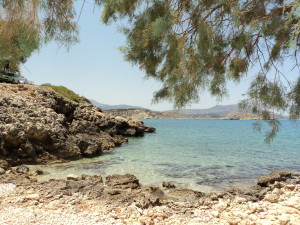 The beautiful little cove at the bottom of the hill where I live!

As is our ‘usual thing’ and something we both absolutely love doing – we went exploring new places that Fran has never been to yet – despite this being her fifth visit! The first and most special place I was itching to explore with Fran was the little cove I can see from my balcony, at the bottom of the hill and directly below me. I have admired this view enough times to realise that a descent to the cove on foot from my house would be arduous and possibly even dangerous! So instead we took the short coastal road in Almyrida and parked at the end. From there it was just a quick walk down to the sea. The cove was so much bigger than I thought it would be – obviously! I had been viewing it from a distance! It looked so pretty and peaceful. Far from the beaten track of Almyrida’s busy beaches, this little cove felt like hidden treasure! 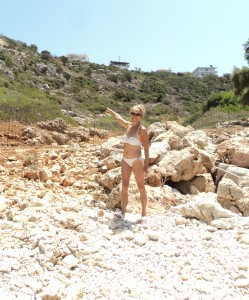 My house from the cove, perched on the hill above – directly where I’m pointing

Because it’s situated at the bottom of my garden, so to speak, it felt like it was my special place! There is a large log lying on its side under an olive tree – just begging to be sat on – which of course, we did! After admiring it’s beauty, we immediately went for a swim in the warm turquoise waters, berating ourselves for forgetting to bring the snorkels. We spent several hours taking pictures and marvelling at how small my house looked from the cove! I made a resolution to return on my own, this summer (busy schedule permitting) and spend a peaceful afternoon swimming and relaxing there – what bliss!

Fran and I enjoyed lunch in Almyrida before heading to a favourite spot of ours – again only a short drive away and situated just outside Almyrida. Kera is reached after a long and dusty walk down to its small rocky beaches. This is also a peaceful and quiet area of the coastline and in fact the far beach – which was where we were headed – is actually a nudist area! This didn’t bother Fran and I in the slightest and there were only a handful of nudists there anyway. All we wanted to do was to swim to the large slug-shaped rock and climb up onto it! 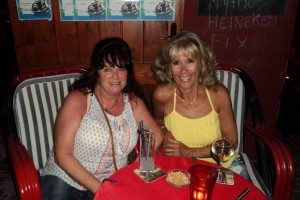 I took Fran to Falasarna because I knew she would love its beautiful large sandy beach and we found a lovely spot to base ourselves, in some dunes surrounded by large rocks. We explored a little, swam, picked a few shells and had lunch at one of the beach Tavernas. But we got fed up of being sand-blasted because it really hurt! It turned out to be a very windy weekend and Falasarna just wasn’t the place to be! 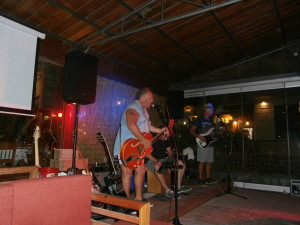 Nevertheless, the next day we went to Georgioupoli and spent a pleasant hour or so, browsing the shops and enjoying lunch in the square, before hitting the beach and just relaxing. We also went into Chania, lunched on the Harbour Front and then took a long walk to the beach resort of Neo Chora. We wanted to cool off in the sea there, as it was so hot! 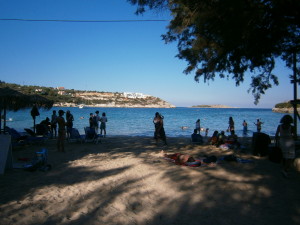 One day we drove to Marathi – the beach resort directly opposite from Almyrida Bay. There are three beaches there and lots of lovely tavernas – a great place to go for lunch on a short boat trip. It’s also very popular with the Greeks. At around 6pm I suggested we visit pretty Loutraki, which is another sandy but smaller beach next to Marathi but further along the coastline. This is definitely a beach for the younger people who like to party and listen to loud music. I loved it and the music reminded me of being at a beach party! We had a leisurely coffee there and people-watched! 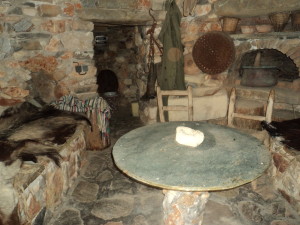 Inside one of the buildings at Koymos in Kalives

Fran and I spent a day in Kalives and re-visited Koymos – the enchanting and original museum of buildings and mosaics built entirely of stones honed from the Lefka Ori and created by one very talented Greek man during a period of almost 30 years! As their leaflet quotes, “A harmonious union of nature and traditions of Crete – of yesterday and today.” We had a light and tasty Greek lunch among the enchanting gardens. I love .this place

I also took Fran to Bali – another place she had not been to before and she absolutely loved it – as so many people do! I have talked about Bali many times in this Blog and never tire of visiting all its beaches and enjoying coffee in the tiny harbour. Built on a mountain and spread out along a long and winding road, there is much walking up and down to do but so much to see! I wish now that we had taken more photos. 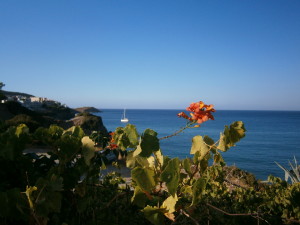 Pretty as a picture postcard! Fran’s photo of one of the views from Bali

During our evenings out – and there were many – we went to a Greek street party in Vamos square and a Carl Axon gig (of ‘Spirit in the Sky’ fame), held at Nikita’s. He really is a great guitarist and entertainer who does much for charity in our area of Apokoronas. We ate countless dinners out – mostly in Almyrida because there is just so much choice. Some nights we had dinner at mine, just chilling on my balcony listening to music and of course, endlessly chatting! One night we had such a laugh looking through old photos of our many previous holidays together – going years back! All in all, I had a thoroughly enjoyable two weeks with Fran.

Ralph just cute as a button – as if he’s saying “Look what I can do now!”

I do so miss my gorgeous baby grandson, Ralph! Thankfully I have regular Skype contact with Emma and always love seeing Ralph. But Emma went back to work last week after her maternity leave finished and Ralph has caught all sorts of germs from the nursery he goes to. Aah bless! He has been poorly and I itch to hug him! Emma is coping so well, as she always does – despite these difficult times when Ash is away and training. It is lovely though, that Zoe and Rich can go and visit at weekends, now that they live so much nearer than before. Many times Emma has Skyped me when they were at hers and then we have all been able to chat! 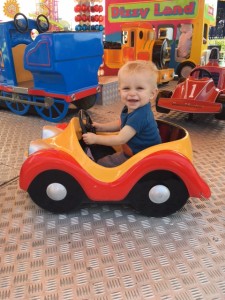