I realize that I haven’t posted for many weeks, but then there hasn’t really been much to write about.  For the first time in 11 years I have not been selling my unique Seashell Mosaic Paintings & Collages by the beach in Almyrida. I have dearly missed seeing the tourists that visit Almyrida every year and meeting all the new visitors that arrive from all over the world. I have missed that wonderful holiday atmosphere that is so normally prevalent in Almyrida during the summer months from May to October. I have missed all the buzz and the fun that comes with my beach selling season. 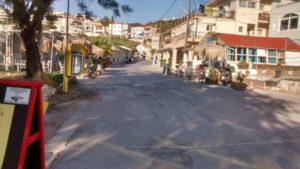 Almyrida – open for the summer but no tourists, so totally deserted!

However, with circumstances changing constantly as a result of Covid-19, I plan to keep an eagle’s eye on the status of Almyrida, week by week. Depending on how many tourists are able to visit Greece as travel restrictions are relaxed, I may yet get an opportunity to set up my stall again, even if it’s just for an odd day now and then.

The Almyrida Residence Hotel reopens on Friday and I am hearing locally of villa and apartment bookings which all give me fresh hope. With airlines now offering flights at prices ‘never to be seen again’ – I have a feeling that I will finally have some selling days to look forward to. As it turns out, Emma and Ash have taken advantage of the cheap flights and have booked to come to Crete on 25th July for one week. I am literally over the moon!! I really did not think I would see my Grandchildren, Ralph and Neve at all this summer, so I am justifiably overjoyed! 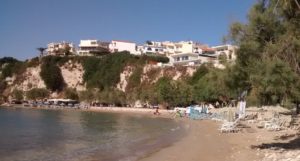 One of Almyrida’s beaches – without tourists – rows of empty sunbeds.

Everywhere in Almyrida is open and as you’d expect it to be… apart from the unbelievable lack of a single tourist! It is so surreal and strange to behold and all the local Greeks who work here can scarcely believe it. The expats who live here are the only ones giving them any business. I have been into Almyrida several times over the last few weeks and each time it seems weird. Lisa and I have had a couple of afternoons relaxing on Almyrida beach by the Cantina and last Saturday, Charlie and I decided to be tourists for a whole day in Almyrida. We started off with coffee and then lunch at Franscoise, then because the sea was too rough for a swim, we moved on to Captain Jack’s to shoot some pool at their seaside terrace. 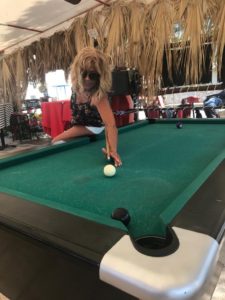 Get me – about to pot the black and beating Charlie!

Neither of us had played for years and I felt a little like a pool hustler when I beat Charlie at the best of 3! Mark and his friend challenged us to a couple of doubles matches – but we lost both games. I really enjoyed our ‘tourist’ day and we have been down to Almyrida’s beaches for a swim, followed by coffee at Franscoise several times already. 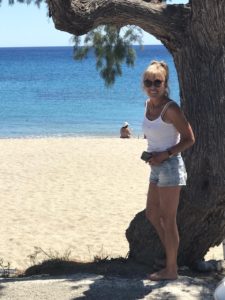 Somewhere on the south coast of Crete – a beautiful almost deserted beach!

Charlie and I had a wonderful day out on the South Coast about a month ago. We visited several beaches along the coastline. Restaurants and bars were still not open then, but we were able to eat our picnic lunch sitting comfortably outside a lovely beachside taverna, with the kind and welcoming permission of the Greek owner. All the beautiful beaches were deserted…. so strange to see during the summer months, when normally they would be full of tourists. It is like living on a paradise island and having it all to yourself!

Even visiting Chania a few weeks ago – Charlie and I were amazed to see how quiet the harbour front was. By then all the restaurants were open again, but only a few Greeks and expats were eating or drinking there. The harbour front itself was deserted of all people and this was on a Saturday. Weird. 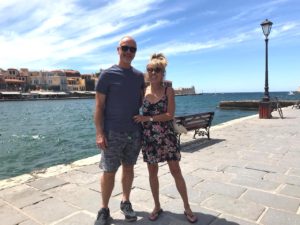 I spent a day with Lisa visiting an area they call ‘Chania Camping’ in Agios Apostles. Charlie first showed me the place when we were in Chania and I couldn’t believe I hadn’t seen it before. It really is gorgeous! Almost like a tiny island, surrounded by beaches – every one of them different so that Lisa and I had a job to decide which one we wanted to settle on for the day. In the middle of all these beaches lies a large wooded area, like a small forest.  I should have taken some photos but for some reason I didn’t think to. Although it was only a Tuesday, Chania Camping was busy with Greeks enjoying their own local beautyspots for a change when they would usually be working the bars and restaurants.

Since the restaurants and tavernas reopened, we have enjoyed a meal out with friends at my favourite restaurant, Umami, another quiz night at Captain Jack’s and the first live music gig of the summer. Carl Axon & the Rocking Rebels played at Kavros, near Georgioupoli, to mark the first day when restrictions were lifted for live music gatherings. It has been wonderful to be socialising and catching up with friends again. 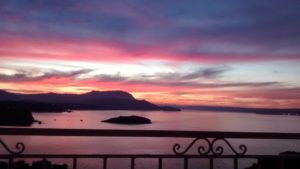 As for my workouts and training – I am still really enjoying them, so that they have now truly become a normal part of my new lifestyle. Despite what I wrote in my last post about it being too hot for our bike rides… Charlie and I managed a further 5 rides a couple of weeks ago, when the weather cooled, with cloudy skies and a fair breeze – all conditions making it more doable. 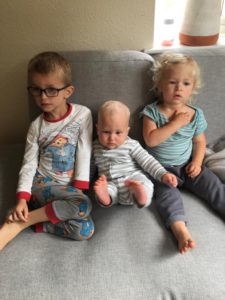 Since the temperatures soared, we have been exercising regularly in the pool as well. This is such fun and so refreshing in the heat. Charlie devised some excellent pool exercises and sometimes we are in there for an hour or more, without realising because the time just flies by. Not only am I feeling much fitter, but I have managed to gain 4lbs in the last 4 months which I am thrilled to bits about and which Charlie reckons is all muscle gain. So the combination of workouts with weights, general and varied cardiac exercise and an increased protein diet is producing all the desired results. You see I wanted to get fit but I was worried I would loose weight in the process, as I am prone to do. So Charlie’s personal training programme is absolutely right for me!

It has been a worrying time for me where my Etsy shop is concerned.  During lockdown I had quite a few sales, but Covid-19 has taken its toll on the world’s shipping and postal services.  An order to the UK took 4 weeks to arrive and the situation was much worse in the US, where I had 2 orders languishing at the Chicago depot for many weeks.  Only this week have USPS been able to start dealing with the backlog of international parcels.  What a relief, as I feared my Artworks would get lost in all the confusion. 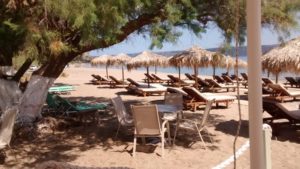 Stopped for a coffee on the far beach at Kalyves.. Same picture as in Almyrida – no tourists!

So despite all the weird circumstances of living day to day when there is a pandemic raging across the world – I still feel unbelievably fortunate to be living here on Crete and have much to look forward to. Gradually more social events are being planned and there’s a big Birthday Party coming up in a couple of weeks. But best of all (and fingers crossed) I get to see Emma, Ash, Ralph and Neve at the end of July and maybe Zoe, Rich and Arthur will be able to visit later in the summer. It’s always good to stay positive.