There’s been so much I’ve wanted to write about – but no time in which to do it! My life is always so full anyway but right now it’s all about family. I have exciting news to impart which you will already have gathered from my heading of this post and I shall go into more detail about it later…

In the meantime, Nick came back to Crete and we spent much of the few days he stayed with me, searching for a flat for him to live in. Really he should have secured one when he was over in January. But hey, that’s guys for you! When I knew I was going to live here on Crete, I came out a few months before the move to look for the right place and then secured it with a deposit. Anyway he has found somewhere temporary during which he has time to find a more permanent dwelling.

I had my first day of selling by the beach, the day before Emma and Ash were due to stay. I sold 2 pictures which was a reasonable start to the season – given that it’s early and therefore there are not so many tourists around. I also did really well on the following Friday, selling three of my large seashell mosaics and collages and two smaller ones too. This is encouraging and I hope it means that the predictions for record tourism this summer are true? 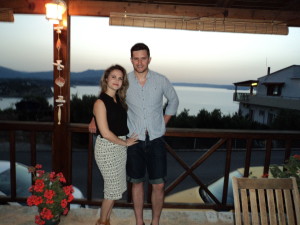 I was beside myself with excitement on the day Emma and Ash were coming to stay. They had hired a car for the week and arrived at mine around 3pm. The wonderful news they brought with them has left me feeling on top of the world ever since! Aside from my celebrating their engagement – Emma and Ash have decided that they want to get married here on Crete! I am so happy and thrilled. It will be so wonderful to have all my family here at the same time.

We spent the whole of the first day on the Almyrida Residence Roof Top Garden. This is Emma and Ash’s first choice venue for the reception and is the top hotel in Almyrida. I have twice stayed at the Almyrida Residence Hotel before I moved to Crete and would recommend it to everyone. From my own personal experience over the last eight years I can honestly say that its quality food and customer service is excellent. Added to this, the management and staff’s warm and friendly attitude to guests is most welcoming and I have only ever heard glowing reports from family and friends when they have stayed there – when ‘chez moi’ was booked up! I’ve even held two exhibitions at the Almyrida Resort. Consequently I have come to know Satiris and Fhofie and as soon as we arrived on the Roof Garden I went in search of one or both of them.

An hour later, both Satiris and Fhofie joined us and Emma and Ash were able to tell them exactly what they wished for their wedding reception. The Hotel would get back to Emma and Ash in a couple of days, with a detailed and itemised quote via email. A short while after the meeting finished I received a call from Neisha, whom I also know and who expertly organises the Almyrida Xmas Fayre every year. It turns out that she also helps organise and manage weddings – as employed by the Almyrida Beach Resort. I imagine she does these expertly and efficiently too! So – so far it would appear that we are in the best hands! We met with Neisha on the roof garden and went through some of the other details with her.

Emma and Ash want to marry in a church or chapel and before we went to the Roof Garden we visited the nearby village of Kokkino Chorio to see St George’s chapel, which had been recommended to us. The majority of the chapels here on the Apokoronou area of Crete are quite small and certainly not large enough to hold all the guests during the service. Marriage ceremonies are held right outside the chapel in a courtyard that is almost like a small arena, with built up continuous steps for seating. It was without doubt, a lovely setting for a wedding but there is also another reason why wedding ceremonies for people living outside of Crete must be conducted outside the churches and chapels. It is because the Greeks will generally not allow anyone who isn’t Greek Orthodox to get married inside them.

Neisha suggested Plaka Church because it is much larger than the chapels and would accommodate the whole wedding party but first we would need to secure permission for the marriage ceremony to take place inside it. At this point I realised that my carefully forged relationships with the local people of Almyrida and Plaka are paying off big style! Nikita is mayor of Almyrida and Plaka and is the person who gives me permission every year to trade all summer by the beach in Almyrida. He also runs a couple of seaside terrace bars which hold many music events during the summer months. Amazingly, he has granted his permission and we are all thrilled to bits! 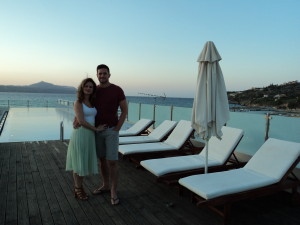 So after we’d enjoyed lunch at the Almyrida Residence Roof Top Garden, a swim in the infinity pool and finally, a lounge about on their comfy padded sun beds, we headed for Plaka Church. Situated just behind Plaka Square, It was just how Emma imagined and there is plenty of space in the courtyard surrounding the church. More importantly, the church is much larger than any of the chapels we’d seen. After looking all around the outside we realised that the doors were locked so we couldn’t see inside the church. I ran across the road to Vangeli’s to see if anyone knew who had a key. As luck would have it, Tsatsia said that Vangeli’s Mum held a key. She lives above the taverna and so Tsatsia made a quick phonecall upstairs and five minutes later, Vangeli’s Mum, accompanied by her friend, came down with the key. They opened up and we entered a beautiful church, bedazzled with ornaments and religious artefacts. Painted frescos covered the whole of the domed ceiling and some walls too. There was almost too much to take in and we were chatting away with these lovely two old Greek ladies, one of whom was able to translate for Vangeli’s Mum as she didn’t understand English. They saw and heard how enthralled we were with the inside of this beautiful church and when we explained that Emma and Ash wanted to have their marriage ceremony in here, the old ladies were thrilled! I think they respected Emma and Ash for wanting to hold it in the church, rather than on a beach or hotel-based location, as are the most popular choices for the majority of couples who come to Crete to marry. Most, if not all Greeks are religious and take great care of their chapels and churches. All Greek Orthodox holy days and festivals are honoured and celebrated on Crete. This simple way of life has existed in Greece for hundreds of years and I know that Emma and Ash consider it a great privilege to be holding their wedding in this beautiful church in Plaka and feeling a small part in Crete’s age old traditions.

As promised, a couple of days later the quote from The Almyrida Resort arrived be email and Emma and Ash were happy and relieved that costs fell within their allotted budget – wonderful! We have the church sorted and the reception venue arranged. There are obviously many finer details to sort but we have almost a year in which to pay attention to every detail as Emma and Ash will be marrying in late May/early June next year. I really can’t wait! 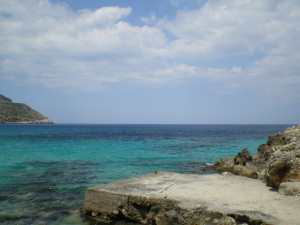 Octopus Bay – an old photo that doesn’t do it justice!

The rest of the week we visited various places including Octopus Bay, a beautiful secluded cove with the most vivid aquamarine waters. It is several years since I was last there for a fish lunch and I’d heard that it had changed hands a couple of years ago. The food was nowhere near the quality it used to be and they moved the restaurant to an outside space that didn’t have the views of the old one. What a shame! We also visited the nearby Scandinavian Hotel complex, where they have a very large pool and very pleasant surroundings for relaxing in. But the main reason we went there was because Ash has been in training for a triathlon, which is due to take place in a week or so. He wanted to continue his training while he was in Crete and at least three times during their week long holiday, Ash went running for three miles around the outskirts of Plaka! At the Scandinavian Hotel, Ash was able to concentrate on his swimming technique, while Emma and I chatted about the Wedding! Later in the week we decided to have dinner on the Almyrida Roof Garden and as you can imagine – we all couldn’t help but talk about this exciting family wedding!

All good things come to an end and a couple of days ago Emma and Ash left for the airport and their return to the UK. I miss them heaps already but hey, it’s all go for me and back to concentrating on my work and selling. I also have to start planning for my exhibition in Chania, in the Old Mosque which is situated on the harbour front. I will be exhibiting along with David from 27th May until 1st June.