Finally we have had some sunny and settled weather for the past couple of weeks, as winter does seem to have dragged out for longer this year. We had to keep cancelling days we were going to decorate because of rain and my whole schedule has had to be worked around these decorating days.
The very last job I am doing is taking a lot longer to complete than I anticipated. It’s also been the most stressful and there are several factors that are accountable for this. The task entailed painting a set of double gates that were so rusty that it took me almost three hours just to sand them down. The day I started the job it was very hot and sunny, without any breeze. The gates were not in any shade so I was very hot and it took a long nine hours to get to the stage where the undercoat was on. I had a day in between before returning to paint the top coat. The real problem was that these gates are silver and the silver paint in itself was a hassle to get hold of. Metallic paint is much more difficult to apply as it doesn’t cover well but goes all streaky! Consequently, I spent too long trying to get a smooth finish. After another nine hours I realised that I would have to put on a third coat! I was quite exhausted in the heat and so disappointed that I had to return, when I thought this would be my last day of painting awful, monotonous railings! 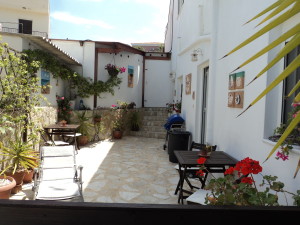 Meanwhile, back at my own apartment there have been so many jobs to do outside after the winter. Homes get so dusty and battered here on Crete and by the time Spring is here, you can really see how winter has taken its toll. Living near the sea brings extra problems too, such as salt erosion and dampness – materialising and resulting in mouldy and flaky patches on inside and outside walls. Oh how we ex-pats have complained that they build houses here only suitable for summer living and which are so ill-equipped for the long heavy rains! My courtyard is the worst hit and has taken me days to whip up into shape again. After clearing all the rubbish that had been blown into it, I painted the walls with a fresh coat of white paint (luckily left over from our last house painting job!). A few weeks ago we had a ‘red sand storm’ and everything was coated in desert sand that really is red and won’t lift off with a hosepipe – you have to scrub it off! Next I stained the tables and chairs as they were down to the bare wood in parts, as well as part of the fence. Then I spring cleaned all the windows with their many recesses, fly screens and shutters. I do love my little courtyard garden.  It’s always sunny from first thing in the morning until sunset.  I hang my washing there while enjoying the view of the sea and the mountains infront of me. I sometimes work on my seashell mosaics there.  I have breakfast or lunch at one of the little tables, depending on where the shade is and on rare occasions I have even sunbathed in my courtyard because it is relatively private.  It’s a great little outdoor space! Oh, and I finally got around to cleaning my car inside and out. It hadn’t been cleaned since last October and was filthy with dust, like a works van! 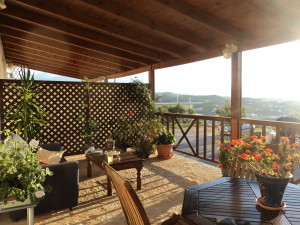 My lovely balcony – all ready for summer!

I have spring cleaned my front balcony too, which as it is raised at least four feet above the road – is not as bad as the courtyard, but the sofa alone took me three hours to get right underneath and inside it. The heavy duty cover which protects it all winter – does the job but you still get spiders and their webs, leaves and debris in the mechanism of the folding bed. It’s quite a major job and I am so thrilled to have my favourite spot back to sit and relax in again! I was taking a short break the other day, lounging on this sofa and watching life go by. I do love living here because I never feel lonely. I’m sitting pretty, just outside Plaka village and people I know often walk past my balcony. Sometimes they stop for a chat or pop in for a coffee and then there are the tourists wandering past, admiring the view directly opposite me. Just further along there is a lay-by where they will stop, drink in the view and take photos. It’s a great backdrop for pictures of loved ones – to become treasured memories for years to come. I have the luxury of this same view every day of my life!
My outside spaces are my living areas all summer long and I absolutely love spending time there. Whether it be the balcony or the courtyard garden and whether it be while working, socialising or just relaxing – I love them both because they are my little pieces of heaven. 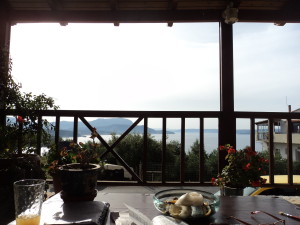 The beautiful view as seen from my ‘now clean’ balcony sofa! My favourite place to relax in the summer! I don’t think photos do it justice!

A couple of weeks ago David and I finally went into Chania to book this year’s exhibition in the Mosque. As is the case every year, we arrived at the Offices of the Port Authorities for just after 6am and were 11th in the queue. We’d like to exhibit at the end of May and so we were reasonably pleased that we were much higher up in the queue this time. However, there was an almighty argument going on as more and more people turned up to book. It was mostly the Greeks that were arguing about the queue and their place in it. Many of these Greeks already have shops in Chania and they group together so that there are several stalls selling jewellery and linens and religious icons – making the Mosque look a bit like a flea market. The good news is that it seems the Port Authorities only want real artists like David and myself to exhibit at the Mosque and so they were insisting on seeing examples of paintings. This was not a problem for David and I and we were further pushed up the list, managing to secure the exact dates in May that we wanted. A good result! I am happy that we don’t have to wait until September this year. Chania is wonderful in May!

I am also very excited about my first guests arriving as it’s my Daughter Emma and her fiancé Ash, visiting for a week on 5th May. They only recently got engaged and I am thrilled to bits for them. We can celebrate when they are here on Crete!

I have more exciting news too – Nick is moving back to Crete for good! He is driving across and expects to be here in just over a week. I am so pleased and excited to have such a close friend back in my life again!  We met here on Crete over five years ago but Nick had to return to the UK for work commitments three years ago. During that time we’ve had just twice yearly visits and Skype. With summer just around the corner, I’ll be wanting to go out and about again – socially. I’ve been practically hibernating for the last three months! It’s true that I haven’t been out socialising much but St Patrick’s night was good when Lisa and I went to a gig at the Cotton Club in Georgioupoli. I loved the Irish music! I also had a bit of a girl’s night out with Lisa, her sister-in-law and her Mum on Saturday. We went to a Carl Axon gig at Nikita’s in Almyrida. He is a great guitarist and a real entertainer and it was a good night. But I also can’t wait to fit in some more beachcombing days with Nick, before the spring is fully over. 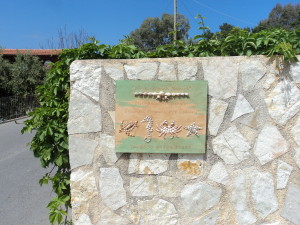 The Advertising Palque on the wall leading to my apartment. Shame you can’t read the sand writing!

I am waiting to choose the right day for my first selling day on the beach in Almyrida. Last month I wrote about ‘My Dilemma’ and several people over the course of the last two years, suggested I take someone on to do the selling for me, thereby freeing up more time for me to produce at home. But aside from the fact that I produce whilst I am there anyway – I absolutely love selling by the beach! I get to meet interesting people from all over the world and find out a little about them such as – where they’re from, whether this is their first visit to Almyrida and what they think of the place and the people? Although there are some tourists around, in a week or so there will be many more. Having said that – while I’ve been sitting here at my desk and writing this post, two Finnish tourists saw my advertising plaque on the wall outside – (which I’ve only just put up!) – and have stopped by to take a look at my artworks. They bought four pictures!