I can honestly say that all I have to write about this time is work (how boring, you probably think to yourself!) Actually it’s not boring because I love and enjoy working on my art, not so much the other work I have to do – but more of that later!

I have a dilemma which I have been pondering over for the past two years. After five successful selling years with too many popular designs to meet demand and not enough time to progress new ideas, I am in a quandary! Last year I made 333 seashell mosaics and collages and amazingly enough, sold 333 designs! Basically I have come to the conclusion that my artworks are too cheap! So much of my time is spent working on my designs that I have little time for anything else. Yet I still have to do decorating jobs in the winter to make ends meet – which also means time taken away from my art. Based on the previous year’s sales, there are not enough hours to produce the same again. What do you think, Richard Branson?!!! 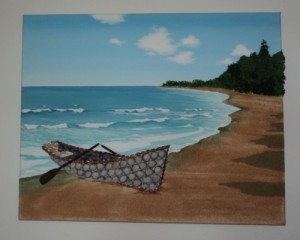 During these last five years I’ve thankfully weathered the recession, surely a good sign when you consider that a picture is the last thing anyone would buy in a recession. But I am working flat out 24/7 to achieve this so what is the solution? Every time I come back to the same answer – I need to increase my prices again. I did this last year, only by a small margin and I am happy to say that it did not affect my sales but I am wondering if I increased them enough? Certainly the more difficult and time-consuming designs should be increased in price because I can only produce a certain amount of these, but what do you think? I would really welcome any feedback comments or opinions.

We have had a bad winter as far as the rain goes. Lots and lots of it has been falling for about six weeks now and there has only been an odd day in between where Ian and I could get on with our house painting jobs. However, we managed two and a half days last week and after a long day on Saturday I have to say that painting railings is not the worst job after all! I had to spend hours glossing a large wooden trellis that was smothered in thorny plants and which tore my hands to shreds! I have yet another of these trellis’ to paint and will be jumping for joy when they are finished! Hopefully the weather will be improving soon and then Ian and I have much work to fit in during the next month or so.
At this time of the year though, I desperately need the money as I have not been selling much during the winter – another dilemma as I don’t have the time to promote sales on the internet because I am too busy making my pictures to meet demand in the summer months! Having said that, it’s only because the weather has been so bad that I have made time to produce a few new designs this winter. I never had the time to do that last year.

During these last few weeks I have also spent many pleasurable hours sorting through all the beautiful coquina seashells that my lovely friend, Jennifer in Texas has kindly sent me. She has spent so many hours of her free time lovingly collecting and cleaning millions (and I kid you not!) of these tiny seashells for me. Someone I have never met but who answered a desperate plea I left on a seashell blog in the states. I was searching for someone just like Jennifer and am so thrilled that she sent me an email offering to help. If I ever went to Texas again I would be sure to look her up so that I could thank her in person. I have loved sorting these coquina into shades and sizes because I find it so relaxing and therapeutic. But best of all is the fact that I can continue to put more detail into my artworks because the shells are so tiny, some so weenie that I could barely pick them up! After I had finished glossing that awful terrace on Saturday, the sun was shining on my balcony and it was lovely and warm. So instead of ploughing straight into my art as I would normally, I decided to do some coquina sorting. I have the most amazing view (although you can’t really see it in the photo) and I never tire of admiring and enjoying it. It’s truly beautiful and I love it! 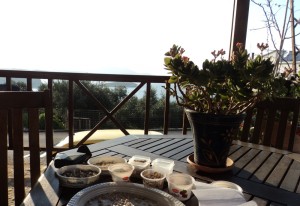 Sitting on my balcony in the sunshine, sorting through Jennifer’s coquina seashells!

I had a disastrous night a couple of weeks ago. I woke at four in the morning with heartburn, stumbled into the bathroom and grabbed the Gaviscon out of the vanity unit above the sink. I don’t suffer with heartburn much these days but here on Crete you can only buy the large bottles and this was a new one which was very heavy. Half asleep, I obviously didn’t get a good grip on the bottle and it slipped out of my hand and crashed into the sink below! OMG it smashed a hole in the sink and left chips of porcelain and cracks everywhere! I couldn’t believe it – the bottle was still intact yet the sink was smashed to smithereens! Of course I couldn’t get back to sleep after this and was too worried about what it would cost me to replace the sink. I had decorating with Ian early the next morning, so was quite exhausted all the next day! I called Ron (Lisa’s uncle who is a plumber) as soon as I had the chance and asked for his help. Bless him, a week later and he had found a sink that had been dumped but was in perfect condition and fitted it for me – all for 20 Euros. How lucky was that?!

It’s not all been about work – I tell a lie! Both Lisa and I have been too busy to find the time for a catch-up so we finally fixed a day and time and last Sunday we met for a few well earned drinks, early doors at Captain Jack’s. We also arranged to meet up for Lisa’s Uncle Ron’s band gig at the Cotton Club in Georgioupoli tonight – this being St Patrick’s Day. The band will be playing Irish music which I love and which will make a nice change. So I am looking forward to that as I haven’t been out much at all.