Believe it or not the weather has been quite unsettled here on Crete – given the time of year. Perhaps it is down to global warming and if other countries have had uncharacteristic weather then why not Crete? Everyone who lives here agrees that the weather we’re having for June – is definitely not usual. I remember it was like this last year too and yet in previous years you could pretty much say it would be blue skies and wall to wall sunshine from May through to the end of September.

Having already missed one Monday of selling a couple of weeks ago, I was determined not to miss another. But I got up at 8am last Monday to dull and cloudy skies again with rain predicted at intervals. What the hell, I thought, nothing ventured, nothing gained so at about 9.30am I pitched up at the edge of the beach in Almyrida anyway. At least I didn’t have the wind to contend with so I was reasonable happy, given the circumstances. It did rain though – all morning, on and off in short light bursts but luckily, as well as my own parasol, I was fortunate to have the use of Thomas and Jackie’s parasol. They are situated just a few yards from me and sell day trips and excursions. Their parasol is bigger and better than mine and did a much better job of keeping the rain off my artworks. It did brighten up in the afternoon and was quite warm too. I sold some pictures so it was worth it despite the rain.

Frustratingly, sometimes the rain that falls on Crete is dirty! We are all used to the red rain that comes from Libya and Egypt. You cannot see through your car windscreen after it has fallen and you can’t just hose it off either! I must have cleaned my car three times this week and my courtyard furniture twice. Each time you think it will be the last and that the weather will settle down. Not so far…

For two months now I have felt so fit and healthy – compared to the nightmare I was having with my joints back in April. In my post – ‘Fortunate to be in Good Hands’, I wrote that the specialist I went to see in Chania, had instructed me to get an X-Ray and to have another blood test, to be the same as the one I had in Chania Hospital in the A & E Department. He wanted me to have these done before I am due to see the Specialist again on June 10th.

So Lisa and I went into Chania on Tuesday but this time we went to a clinic called the Iasis Clinic. My hairdresser, Gail told me about this clinic because she has also been having some health problems too. Anyway I thought it sounded even better than the Hospital and worth a visit. Within an hour I had had the X-Rays and the blood test. I was tested for 16 different things in the blood test and had each wrist X-Rayed separately. The total cost was 100 Euros – the X-Rays were 10 Euros each and it cost 80 Euros for all the different tests carried out on my blood sample – which you can’t deny is extremely reasonable. The results were ready at around 7.30pm, however I decided it would be easier for me to collect them the following Tuesday morning before I see the specialist. 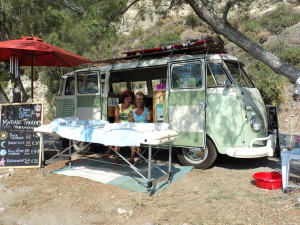 Lisa and I at her Massage & Aromatherapy Station!

At around five pm on Sunday afternoon I popped down to Almyrida to see how Lisa was getting on with her new ‘Massage and Aromatherapy Station’. Situated at the other end of the beach to where I am normally based, she really has made an appealing environment for relaxation and massage.  Equipped with a professional couch, plenty of towels and water for cleaning hands in between massages, customers can even rinse the sand off their feet, should they decide to opt for the reflexology that Lisa also offers. She has wind chimes tinkling from the trees nearby and her boyfriend’s classic campervan gives a homely feel and privacy from the road behind.  What a chilling place it is!

I had a really good selling day at the beach today, considering that thunderstorms were predicted and that they never materialised!  It seemed to be a day for meeting people that I had not seen for a long time and some – for even years!  I also met a lovely American woman who not only bought a couple of my pictures but also offered to collect the beautiful and valuable coquina that I never can have enough supplies of.  She lives in Florida where these shells can be found in their millions so I will email her with all the details when she arrives back home in a couple of weeks.

They go together well! The 2 artworks the American lady bought – both 20 x 20cms

Only a few weeks ago, my close friend Fran, whom I’ve known since primary school days, decided to book a flight to come and spend a couple of weeks with me. Fran has visited me every year since I moved to Crete in 2009, apart from last year. So it has been two years since she was here and we are both very excited about spending time having fun, lots of giggles and exploring. Over the years we have had many holidays together and always have a good time because we enjoy doing the same things and have the same silly sense of humour. So after I have been to see the specialist tomorrow, I will be going straight to the airport in Chania to collect her. Of course I will still have my selling days and there may be other work I also have to do, but there will still be plenty of time for us to have some relaxation and fun!