During these past two weeks, every day that I haven’t been selling, Fran and I have been on days and trips out. We couldn’t have packed any more into our days and nights than we did! We both thoroughly enjoy exploring new places and share a love of adventure. So this has been another wonderful opportunity for us to spend real quality time doing all the things we love doing – which we haven’t done since Fran visited Crete two years ago in May 2012. 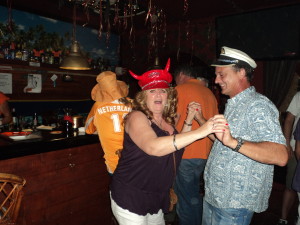 Fran & Will, Larking around in Captain Jack’s

For the first couple of days we stayed fairly local, spending a day in Kalives and a day in Georgioupoli where we just spent hours chatting, relaxing and swimming. On the Friday evening, after I had been selling on the beach all day, we dined at Maki’s and then went on to Captain Jack’s to watch the football when it was Holland’s first game. My Mum is Dutch and so I have always had strong connections with Holland. Since England’s disappointing results and subsequent departure from the competition I am pleased that Holland has come top of their group, ensuring them a place in the next round. It is good to still have a country to root for! Anyway, after that first match the atmosphere in Captain Jack’s was electric because the hosts, Ritchy and Sophia are also Dutch. It was a great fun evening and Fran and I partied until the early hours, donning hats and wigs, dancing and generally larking around. 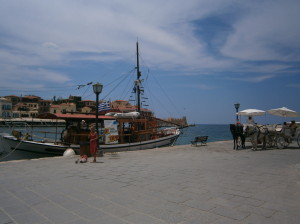 On the first Saturday we went to Stavros and spent a lovely day there, beachcombing and exploring. On the Sunday I drove into Chania, where we had lunch and then went on a three hour trip on an old but small galleon-style ship. We stopped off to do some snorkelling and then later on, the boat anchored again and although it seemed a long way off at the time, Fran and I swam to a little sandy island. We only had about twenty minutes to explore it before we had to swim back to the ship, but we loved every minute of it!

On Tuesday I drove to Kissamos where we boarded a large ferry. First we visited Gramvousa Peninsula, where a large Venetian Castle was built on top of the island to protect Crete from Turkish occupation. After spending about one and a half hours here, we boarded the ferry again and headed for the beautiful lagoons of Balos. There we spent a further three hours wading through warm shallow turquoise waters edged with pink sand. There was much to explore and I collected lots of pretty yellow cockle shells. Like Elafonisi, it is the sort of place you just can’t get enough photos of – a little piece of paradise on earth! 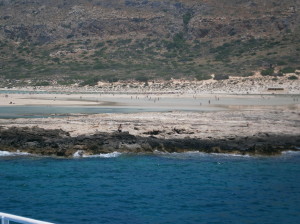 The Beautiful Lagoon of Balos

Because Fran and I enjoy exploring so much, we were exhausted when we returned to the boat and were glad we had reserved some comfortable sun beds right at the front of the boat, on which to relax and doze on during the hour or so journey back to the port of Kissamos.
On Wednesday we visited Georgioupoli again and also Kournas Lake, which is only about ten minutes drive from there. Kournas Lake is the largest freshwater lake on the island of Crete and nestles in the centre of majestic mountains on three sides. We decided to hire a pedalo so that we could explore all around the edges of the Lake. It was by then early evening and the perfect time to go peddling! Well we had such a laugh, reminiscing about the last time we took a pedalo out, which also happened to be in Crete, but was over 30 years ago. We had drifted too far out to sea and couldn’t get back to shore because the current was too strong. Eventually we had to be rescued and we laughed out loud, remembering how embarrassed we felt! At least this would not happen at Kournas Lake – it was like a mill pond! 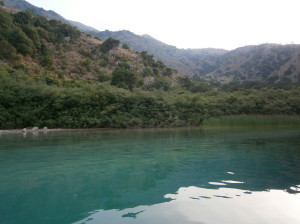 The following day we took the two hour drive to spend the day at beautiful Elafonisi. I wrote about this breathtaking place in a previous post titled “Elafonisi is so beautiful” – and it really is! Although this is the Fourth time Fran has visited me in Crete, we never got around to coming here until now. I am used to beachcombing Elafonisi during the winter months but sadly, when filled with so many tourists, Elafonisi is somewhat spoiled by all the sun beds. There are only a couple of temporary tavernas on the beach but it still seems too commercial when you are used to seeing it in all its natural beauty – minus the man-made paraphernalia! Despite this, Fran absolutely loved Elafonisi and we had a lovely day swimming and paddling in the lagoons and walking all around the area. We stayed until about 6.30pm, which was long after all the coaches had left and at least we got to spend time there when it was a lot quieter. 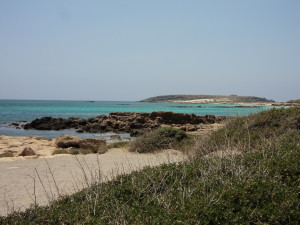 Part of Elafonisi – far from the madding crowd

By Friday I was back selling on the beach all day and after a quick shower and change we went out for dinner and more drinks and fun at lively Captain Jack’s in Almyrida. On Saturday we pottered around the apartment all morning and I was glad of the time spent at home to catch up with washing and other bits and pieces to do with my work. We had lunch and then went into Chania to browse the shops and enjoy ice creams and coffee on the Harbour Front. We had originally intended on having dinner in Chania but found that we weren’t hungry after the large ice-creams we had feasted on, so at around 8pm we set off for home and ended up stopping for a lovely dinner at Erotikriti restaurant in Almyrida.

On Sunday we had decided to drive down to the south coast to Frangokastello, which really appealed to Fran because of the history attached to the centuries old Venetian Castle there and this is a place she has also not been to before. The hour and a half drive took us through the high valley of Askifou and then down a very long and steep mountain which frightened Fran to death! Sitting on the passenger side, she was a lot closer to the edge but I drove slowly and safely, keeping as far away from the edge of the road as was possible. 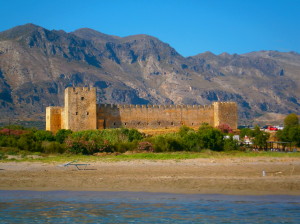 Fran’s fantastic picture of the Venetian Castle at Frangokastello

At the bottom of the mountain we turned left and then drove a further 15 kilometers or so to the castle. As soon as we arrived at the Venetian Castle, we bought tickets to look around it and take pictures. We spent the whole day on the beach just below the castle and also visited another beach further along the coast.
At about 6.30pm I said we should set off for the long journey home but we hadn’t got very far before I noticed the temperature gauge on the car was way off the mark and then we noticed steam coming from the bonnet accompanied by a strong smell! Oh no – something was drastically wrong, so I pulled over and we opened the bonnet to take a look. To cut a long story short, after phonecalls to Lisa (a former mechanic) because we couldn’t get the water we were pouring into the radiator to stay in – we realised we had a much more serious problem. Trust this to happen on a Sunday when I can’t call Yorgos at the garage. I had also called my good friend Ian and after waiting for over an hour and a half for the engine to cool down, I had to accept that we were not going to get home in my car! Ian, bless him, offered to rescue us and took the hour and fifteen minute drive in the dark and over the mountain to collect us and bring us home – what a star!!

I was selling the next day and so I called Yorgos at the garage in Vrysses first thing and told him the problem. He wasn’t too happy when I told him where the car was because he would have to tow it all the way up that large mountain – no easy job! With forward thinking I had left the key to my car behind the petrol cap cover so that I could go ahead and have my selling day in Almyrida, as is usual. Except that these circumstances I now found myself in weren’t normal at all. There was no question of my NOT working that day, especially as I now needed more money to fix the car. I rely so much on my car for getting all the gear down to the beach on selling days. When Ian picked us up the night before, he was able to get everything from my car into his apart from my large table.

Ian dropped me down in Amyrida on Monday morning, with all my art stuff and then I had to borrow some tables from Captain Jack. Later on that day I called Yorgos to see where he was up to and basically it is going to cost me over 800 Euros to fix my car!!! You might think it would be better to scrap the car altogether and get a new one, but decent second hand cars are very hard to find here, cost an arm and a leg and a lot of time which I don’t have. Also it is a case of ‘better the devil you know’ and I have ploughed some serious cash into my punto already so it seems sensible to me to go ahead with the repairs and just hope I can sell more of my pictures to help cover the cost.Yorgos informed me that it would take at least three days to do all the repairs and so rather than relying on someone on Wednesday and possibly Friday, to pick me and all my gear up and then drop me back in the evening, Captain Jack’s kindly offered to store my canvases and display boards etc in their bar until I need them again. How very kind is that? 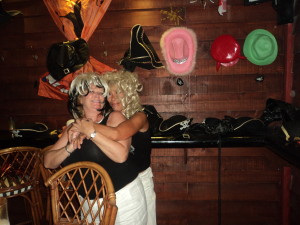 Again I cannot stress enough how fortunate I am to have so many people that are willing to help out in a crisis such as this. I also couldn’t take Fran back to the airport on Tuesday but managed to get her a lift to save her from paying a fortune for a taxi, which was good. All in all both Fran and I have had a fantastic two weeks of wonderful days out and great evenings of fun and enjoyment, laughter and memories to cherish.

I am now playing catch up and making plans for my next guests who arrive on Tuesday, would you believe?! My daughter Emma and niece Sophie are coming to stay for a week and so I am very excited about that. I am hugely relieved that the car will be ready either later today or tomorrow, thereby ensuring that I have transport when Emma and Sophie are here. Thinking positively, as is my nature, things could have been so much worse and the timing of the car breaking down could not have been better.