During these last five years there has been only one black cloud over my otherwise wonderful horizon. I have been trying to secure the return of a considerable sum of money that I loaned to a company called Cretan Life. You may think I am completely mad to do such a thing but you see I knew the owner of the company very well. He was my employer and a dear friend for about 15 years. Cretan Life started out as a UK based company and was then changed to a Greek one. It sells land here in the Apokoronou area of Western Crete. Back in 2008, my dream was to build a small home here with the proceeds from the sale of my home in Bramhall, Cheshire. It all seemed quite plausible until the recession took hold. House prices plummeted and the Sterling/Euro exchange rate dropped dramatically so that I was left with a shortfall. 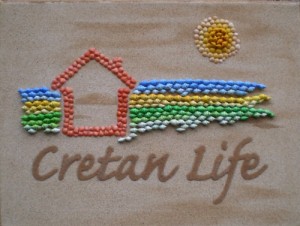 However, my sister Karen and brother-in-law, Mike were very interested in the possibility of investing in my new build and so began discussions with their financial advisor. The timing of this sorry tale just couldn’t have been any worse because in the interim, my friend and the owner of Cretan Life, Hughie, persuaded me to transfer the money for the plot of land I had intended to buy, earlier than I would have liked and which in the meantime, was just idling in a sterling account in Crete, earning not a penny in interest. This happened in October 2009 and we all had every reason to believe that the plan to build my house with Karen and Mike would come to fruition. Sadly and all at the same time during November 2009, Hughie became critically ill and Karen and Mike’s circumstances and priorities changed so that it became clear that my plans to build my home here on Crete would not now be realised. Hughie always understood that I couldn’t afford to become an investor in Cretan Life and had faithfully promised he would happily return my money if I could not proceed with the build. While Hughie was dying I just couldn’t raise the issue of the return of my money because he was so busy making arrangements and provisions for his wife and four children and frankly, it didn’t seem appropriate. I was grieving for him, trying to keep his spirits up, hoping and praying he would pull through. I wish I had known then what I know now.

It all happened so quickly – Hughie died in March 2010, just a few months after he had been taken ill. He left expressed wishes for his wife to continue the running of Cretan Life with the support of Andreas, the Managing Director. But his widow has run Cretan Life into the ground and bled the company dry. Her greed and capacity for spending other people’s money knows no bounds and there are many casualties like me and many people who have been deceived and ripped off. One such person is Jenny, whom I have come to know through our shared experiences with Cretan Life. Jenny, together with four other people who were all close family and friends of Hughie, invested large amounts of money in Cretan Life only to realise after his death, that they had no legal standing or recognition for their investments. We feel so betrayed now because we all trusted him. We have been trying for years to get his widow to do right by us and return our money.

As I mentioned earlier, this is indeed a long and disturbing story of a fight which began in June 2010, and is still ongoing. I could write enough to fill a book about everything that has happened in connection with Cretan Life (now also trading as www.rentapropertyincrete.com ) and the only reason I have finally mentioned this sorry saga in my blog is because at the end of the day it is still a part of my life, whether I like it or not. Also because I wanted to write about Jenny’s recent visit to Chania for the purpose of claiming back possession of her apartment on the Harbour Front. ‘rentapropertyincrete.com had been handling the management and rental of the apartment for a number of years, but Jenny had not been receiving any rental income, despite the fact that the apartment was regularly rented out. 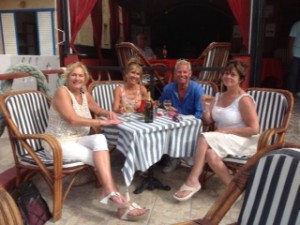 At the bar end of Captain Jack’s, after a tasty lunch – Jenny, Me, Ritchy & Tracey

Last Sunday we arranged to meet  in Almyrida, at the Roof Top Garden of the Almyrida Residence Hotel. Jenny’s friend Tracey, who accompanied her to Crete, was also there. We spent a couple of hours and a few glasses of wine, bringing each other up-to-date with all the recent facts and developments of the Cretan Life case.
We did not realise how long we had been discussing matters and eventually I suggested we move on to Captain Jack’s for a much-needed late lunch. A lady called Caroline, whom Jenny and Tracey met in Chania and who is now going to manage Jenny’s apartment for her, had also recommended she visit Captain Jack’s when in Almyrida. It is no surprise to me that word is travelling fast in the area, regarding the great hospitality, food, entertainment and atmosphere that is all available at this lively bar. Captain Jack’s hosts, Ritchy and Sophia are always there with a warm welcome and on Sunday, Ritchy surprised us with a special platter of various oriental and mixed food dishes – wonderful! We spent a further couple of hours enjoying the food and wine in the sunshine on their beautiful seaside terrace, making sure we didn’t spoil the ambience with any further mention of that dreadful company, Cretan Life aka rentapropertyincrete.com!

The following Tuesday, I arranged to meet Jenny and Tracey again – this time in Chania. I had to go and collect my leaflets from the printers and was dismayed to see that part of the text had been printed in the wrong colour! Even though I had left a printed sample of the leaflet so that they could see how it should look, together with my mobile number – to call me with any queries and also to let me know when they would be ready for collection – there was no quality control, checking system or phone call. It is not easy arguing with the Greeks because of the language – much is ‘lost in translation’. So all I could do was to negotiate a price reduction, learn from this experience and chalk it up for next time! In the end though, the day turned out to be quite profitable as Jenny purchased a few of my artworks for her apartment in Chania. She also gave me permission to use her apartment as an overnight stop should I wish to enjoy an evening out on Chania Harbour without having to worry about driving home. How marvellous is that?!

On Friday, after selling on the beach all day I really felt in the mood for a night out. Lisa was unable to join me and so at around 10pm I decided to venture into Almyrida and Captain Jack’s – unaccompanied! I just knew that there would be people in the bar that I could happily chat to. In fact there were so many people I could chat to that I was spoilt for choice! I even met some new people, had a fab time and couldn’t believe that I got home after 4am! It really is such a bonus to be able to walk into a bar here on my own and not feel intimidated or conspicuous – something I would never have attempted to do in the UK.

One thought on “One to Avoid – A Company Called Cretan Life (AKA rentapropertyincrete.com)”