A couple of posts back I wrote about how we missed Carnival altogether – mainly because we thought that there wasn’t going to be one in Kalives this year. Well I was totally wrong! The reason we got this impression was because Rethymnon decided to have their Carnival early whereas normally, as far as tradition goes, Carnival is always held on the weekend before Clean Monday.
If you’re wondering what ‘Clean Monday’ is, I can tell you that it’s the first day of the Eastern Orthodox Lent and this year it fell on the 3rd March. For the next 40 days until Easter Saturday, the Greeks will not eat meat. On this day though, they have their long held traditions and are seen flying kites (weather permitting) and feasting on seafood dishes and layana – a special unleavened bread only baked and eaten on this day. I do love the way the Greeks are so loyal to their traditions – it is one of the many things that attracted me to come and live in Crete. 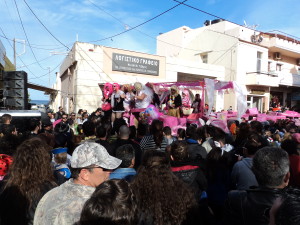 So this was all great news and on Sunday a few of us met up in Kalives Square – only ten minutes drive from where I live – to enjoy the festivities. The main road and Square are never as packed with people as it is on Carnival Day. Tables and chairs are set up almost everywhere along the ‘float route’ with everyone enjoying the Souvlaki and drinking with gusto! It is difficult to get a table unless you arrive in plenty of time. We were surprised at how many floats there were this year. Judging from past Carnivals that I have been to, there are only a few and they are normally politically orientated but this year there were at least ten floats with lots of different themes. Yes, there was a ‘farmer’s dispute float and another had people dressed as police behind bars, but they were the only ones making a political statement. Many of the floats had grills attached with smoke rising, where they were cooking Souvlaki. Can you imagine what UK health and safety would have to say about that? The people on the floats were dancing about so much that someone had to hold onto the grills for fear they would fall off! The music was really funky and blared out of giant speakers placed everywhere. Also, we didn’t get the expected bad weather and instead it stayed dry and sunny all afternoon. It was a great fun day out and I am so glad that we didn’t miss the Carnival afterall!