I’ve had so much going on these last two weeks that I haven’t found the time to write in this Blog. Sometimes I regret having even started a Blog because there are already too many demands on my time! However, I feel somewhat committed to it now so I shall jog my memory for all that has happened in my life lately.

Aside from working on my seashell mosaics and collages – always a must if I’m to be prepared for the fast approaching summer season – I have been painting and decorating villas with Ian again. 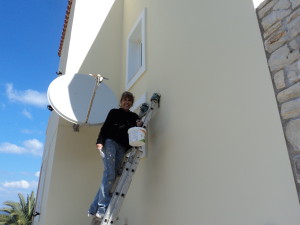 High up on the ladders painting window recesses.

I did two days last week and four on the trot this week. Exhausting work, especially when it’s been so hot on some days that when I had to paint in the full sun, I was stripping layers of clothing off until all I was wearing was a pair of shorts and a strappy top. By total contrast, when I was painting in the shade and high up the ladders – if the wind was blowing, I was putting layers back on again! When I get back home at 4pm I am straight back to working on my canvases until around 8pm, making decorating days particularly long and tiring.

But Thursday was the hardest day of this past week as I had to be up at 5am in order to be in Chania for the crack of dawn!  David and I were booking our major exhibition in the Mosque at the Port Authorities in Chania.  They allow only one day for all the applicants to book and this means that you are allocated your slot on a first come first served basis. Because it is such a prestigious and sought after location, there are many people wanting to book. Even arriving there so early, we were 14th in line.  This year the Port Authorities had decided that the side hall of the Mosque was going to be turned into an office and so consequently, there would be less availability.  This was particularly bad news for everyone, also because the side hall was much cheaper. Originally, David and I had planned to have one exhibition in May and another in September.  May was to be in the side hall and September in the main hall but with the side hall now unavailable, we could not afford to do both and anyway, we were sure that most of the dates would be taken by the time we would get around to booking.  We had to hang around for many hours until our number was called – yet amazingly, we got the exact dates in September that we wanted!  I can only assume that it must be fate and both David and I were on a real high as we finally left the building!  As soon as I returned home, I changed into my decorating gear and was down at the villa painting again until 4pm.

Last weekend could be called ‘St Patrick’s Weekend’ because I went out for a couple of planned events held in Plaka and Almyrida. The first was on the Saturday before St Patrick’s Day. Ray had organised a disco at Vangeli’s – my local taverna in Plaka. I love Ray’s discos because he always plays such great dance tunes including Billy Paul’s version of ‘Your Song’ – an all time favourite of mine which never fails to get me onto the dance floor. Because Ray knows that I adore this track he played it twice. Needless to say I danced my socks off all evening and had a thoroughly great night out! 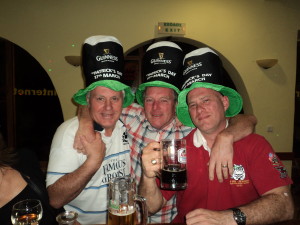 Two nights later I was out again as CJ’s were hosting a St Patrick’s Day Party in conjunction with their regular ‘Open Mic’ night. There were some really good live music bands playing and plenty of people I knew there – some of which I had fun playing ‘Jenga’ with. CJ’s have a large range of games available to play and Jenga is one of the most popular. It sits temptingly on the bar as a tall tower of wooden tumbling, stacking blocks and the idea of the game is to carefully nudge out one of the blocks and place it on the top of the tower without it falling down. It’s such a good laugh when you’ve had a few drinks! 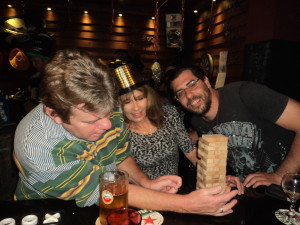 Playing Jenga at the bar in CJ’s

I am way too tired to go out this weekend at all and instead am quite happy to spend my evenings relaxing – reading, Sudoku and just watching TV.