Well it’s the end of July and it’s been another record month for sales. The tourists have been flooding back to Crete after the previous year’s depleted numbers. Last year the British and European media had been negative towards Greece almost all of 2012. Having now been in the tourist business in Crete for the last four years, I know what a difference that can make. As it turned out, all the tourists who did venture to Crete in 2012 were not disappointed – in fact quite the opposite. Many of them said they knew of people who had cancelled their holidays here and would regret having listened to all the hype. So it’s all good news that things are back to normal this year. 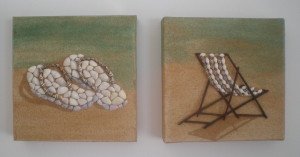 I think I can also attribute my success to having kept my prices the same for the fourth consecutive year, making my seashell mosaics and collages very reasonably priced. Add to that the fact that I am selling a unique style of contemporary art, a true souvenir which is hand-made in Crete – and I believe I have a winning combination! 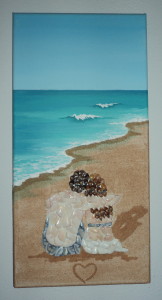 But enough about work. I have so much more to look forward to. It’s strange though, in a way, that I haven’t had much else going on these past few weeks, other than what is work related. Normally I’d have had more visitors which in turn means more wining and dining out, days and lunches out. It’s just the way things have fallen this year so it will be extra special when Zoe, Emma and Ash come back to Crete in just under three weeks. I’ve said it before and am saying it again…I can’t wait!