Thursday night’s Thanksgiving dinner at Jeff’s was amazing!  It really was like a Christmas dinner with all the trimmings!  Fabulous turkey roasted American style with stuffing that was a meal in itself.  Before it was served we chatted outside while admiring the amazing view and played a little pool, which was good fun!  But after the meal we were all goosed and yawning!  Apparently Turkey possesses a chemical that induces tiredness – never knew that before and it surely explains why everybody wants a nap after their enormous Chritmas dinners!

Yesterday I went round to my Landlord’s house to pay the next 6 months rent as a lump sum in advance, which is what I always prefer to do. If I pay my largest bill while I still have money in the bank, then I don’t have to worry about it until I am selling again.
The Landlord, however, after promising me when I moved here two years ago, that the rent would never go up, has now raised it by 10%! I reminded him of his promise and he waved it away as he does with everything. It is so frustrating dealing with him and so I always try to avoid him instead, preferring to speak with his wife who has a better understanding of English (most important!) and is more approachable when there’s a problem. But I have learned that he doesn’t much care what you do to his property as long as you don’t hassle him with any problems.

So… I have calmed down a bit, weighed up all the pros and cons and realise I still have great value for money. I was extremely fortunate to secure this apartment for only 300 Euros a month anyway and I have the marvellous benefit of having free wireless internet at all times. My internet access is a very precious commodity; it’s a communication tool for family and friends. Skype is my telephone and Voip, my free access to all landlines around the world – along with email – both essential for my work. But I also rely on the internet for all my TV and now radio. Up until I returned from the UK and Spain in September, I had been listening to Magic FM through my satellite TV and stereo system. Music is so important to me because I just can’t work without it. Putting CD’s on and changing them every half hour or so is just no good for me as it interrupts my work too much. But the UK decided to move their satellite further away from Crete and so we lost the signal. So I tried to listen through my laptop, plugged into the stereo TV, without success because the radio player wouldn’t load. I called the offices of Magic in frustration, to discover that I’d been blocked because I was outside the UK! To cut a long story short, I downloaded ExpatSheild to obtain a UK-based IP address and I have to activate it each time I want to listen to the radio. But at least now I have it back again, albeit a bit spasmodically, especially during bad weather storms.

Returning to my living expenses here on Crete, my rent and free Internet access is now saving me over 1,000 Euros on the previous apartment – just as well in these years of recession! Who would have dreamed that it would endure for so long? I really can’t afford to return to the UK for three weeks for Christmas and New Year every year as I have done for the last five. But it wouldn’t be Christmas for me without my daughters, large family and all my UK friends around to celebrate it with. The decorating jobs with Ian have been a real help financially but I still have to watch every penny. Truth is – I spend far too many hours trying to keep up with the demand for more of my Seashell Mosaics and Collages, that it makes me think I am not charging enough for them. Keeping the prices the same for the whole of this five year recession has now become unrealistic given that all my supplier costs have doubled during this time. This conundrum I find myself in has been bugging me for some time now and I realise that I have no choice but to raise the prices of my artworks. It’s all about balance, fairness and the feed-back knowledge telling me I have a very marketable talent but which at the same time I feel has been undervalued for some years.

Anyway, money worries to the back of my mind, I bobbed down to Captain Jack’s at around 6.30 to meet my friends for another night of fun!  The bar was festively adorned and warmly inviting.  The Barbeque was fab, replete with tasty ribs and whisky sauce which I remember Mum making many years ago and fresh fruit and ice-cream dessert which was yummy!  We ended up playing a music quiz and even darts!  No dancing though this time but the music carried on the festive theme and played all the classic Christmas hits. 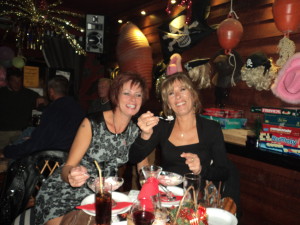 In our favourite spot – Lisa and I enjoying our dessert!

Tomorrow is the Annual Almyrida Xmas Fayre and I have spent pretty much all day preparing for it, pricing my mosaics at their usual price, I might add! Set-up time is 10.00am and the event will carry on all day until early evening. It’s a long but very enjoyable social occasion and I am looking forward to it.