So, what’s been happening in my life these past two and a half weeks? Although I am too pleasantly absorbed in my work to write this blog more often, it’s always nice to reflect back on what I have done and achieved on those days.

Following Jenny’s return to the UK, the weather continued to deteriorate further and we had heaps of rain and thunderstorms. But despite the awful weather, Lisa and I made the effort to ‘partly’ dress up for Captain Jack’s Halloween Party on Friday 31st. Originally it was going to be held on their seaside terrace but heavy rain put paid to that and instead the party went ahead indoors. There was a good live band playing and the entire bar areas were decked out with Halloween-style drapes and ghoulish decorations. For our personal decorations, Lisa and I took the quick and easy option of going dressed as cats, donning ears, tail and face make-up to suit, complete with whiskers! We had plenty to drink and a merry old time – even though our ‘tails’ did keep getting in the way! 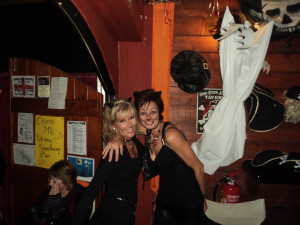 Pity you can’t see our tails! Lisa and I dressed up as cats at the Captain Jack’s Halloween Party.

On the work front I am pleased to have already sold two of my mosaics from the Captain Jack’s display, even though they had been up for less than two weeks. This is great news as it is a new winter outlet for my mixed media art. I have recently finished a ‘Fisherman’ seashell mosaic combined with mixed media collage, as well as my Laden Donkeys design. I have also made a start on Jenny’s project although I need to source one or two of the items I will need for it. Talking of sourcing… I am reminded again of all the seashells I need to bolster my depleted stocks. Sadly I can’t find all the shells I need on Crete’s beaches and have to source many from shell suppliers all over the world.  Here on Crete though, different shells can be obtained from different beaches and I must find the time to visit them all a few times over the winter and spring seasons. I never tire of finding something truly beautiful on the beach and then placing it in one of my mosaics. Even so, many people do not realise the ‘behind the scenes’ work that goes into creating my mosaics. The process of acquiring the seasells. Because I don’t use cut shells I must have every type in every size from teeny tiny to just over an inch. In order to produce the detail that goes into my mosaics I use only small and tiny shells. It’s rather like doing a complicated jigsaw. It’s all about fitting the shapes to leave the tiniest gaps possible. Believe me; it has taken me many years to master and perfect the technique. Once I have picked the right seashells from the beach, they must be cleaned and sorted before I can even think of using them. 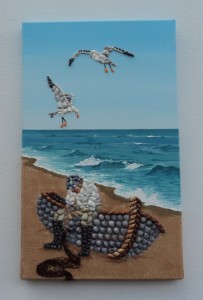 With all this in mind, last Wednesday turned out to be a glorious day and so I went beachcombing down on the south coast, with my friend Ian. I was desperate for the shells I call turtle ‘flippers’ which are usually found in abundance on and off the shores of Frangokastello. I cannot produce any more of the larger version of the ‘Baby turtles race to sea’ design until I find some more. I sold every one I produced this summer and even had to take the odd ones down from around the apartment and courtyard. The other problem I have is that I am waiting for the canvases for the smaller version and although I ordered them weeks ago, they are not arriving from China until mid December. This is frustrating because it means I won’t have any to sell at the forthcoming Almyrida Xmas Fayre, which is now only just over two weeks away. 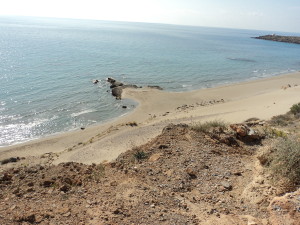 A beautiful beach that Ian and I discovered on the south coast. You can’t see the sand hills but they are there, just under the edge of the cliff!

But I digress, Ian and I had a great fun day exploring, but there weren’t many of the ‘flipper’ shells around, so we decided to venture further along the coast until we happened upon some truly wonderful beaches! One such beach had huge sand-dunes and to reach it we really just had to set off running down the sandy slopes! Without realising how steep they were, which in turn made me go faster than I wanted to, I ended up falling flat on my bum, on probably the only stone there! Ouch that hurt! We had a picnic on that beach and although there were no seashells there, we still enjoyed a walk up and down the shoreline, admiring the scenery as we walked. In fact we also walked up and down the large beach at Platias, enjoying the sunshine along with the sea air and the exercise! 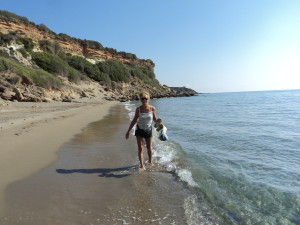 Same beach on the south coast, shell bag in hand, I am enjoying a paddle in the still warm water.

I have also spent a couple of mornings combing Kalives beach and have been pleasantly surprised by how many seashells I collected. I know I am always harping on about this but when I’ve got the beach to myself and the sun is shining, I am never happier than when I am collecting the ocean’s treasures!

My birthday came and went without too much fuss. During that day while I was working, I had many welcomed interruptions by way of Skype calls from my girls, Mum, my sisters and even my brother Mark. We all lead such busy lives but it’s always great to have proper conversations and see each other while we’re talking! I also received several ‘happy birthday’ texts from friends. In the evening Lisa and I went out for a few quiet drinks and you know… that was just fine!

Back to talking about the Almyrida Xmas Fayre, I am looking forward to it very much. It is such a big social occasion and really good exposure for my mixed media art. But I must also find time to put hinges on six new display boards. My old ones were in tatters – unexpected wind and rain often rendering them broken and wet. By the end of the summer they were barely holding my pictures up and frankly- I was fed up with re-gluing and fixing the frames. So to the bins they went!

Now, back to the present – It’s been another warm and sunny day and I have been out and about all morning, sorting out my car insurance, a trip to the dentist and the bank! Then after lunch I spent a very pleasant couple of hours doing mosaic on the balcony, as the warm afternoon sun on there is just delightful! There’s not a breath of wind making it perfect conditions for working in. Right now though, I am sitting at the table on my balcony writing this up.