Two weeks ago I was starting my exhibition with David in the Old Mosque on Chania Harbour Front. In terms of sales I am pleased to say that it’s been my most successful September exhibition to date. This is good news because from what I have been told, tourists are still being careful with their money and generally have less to spend these days. The UK’s economy may well be improving but elsewhere, signs of this long recession are still apparent. 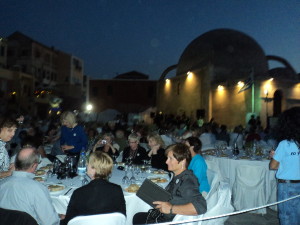 Welcome Party for the cruise ship tourists, right behind the Mosque!

As is the case with every exhibition in Chania, there were some memorable moments that I just have to share with you. Early on the Friday morning a cruise ship docked just outside Chania harbour. It was a relatively small ship in that it carried only 700 passengers – unlike the huge cruise ships that carry over 3,000 passengers and have to dock in Souda Bay, a few miles outside of Chania. What I never realised though, was that when a ship docks in Chania, at their own expense, the Cretans throw a huge welcome party for all the passengers! They set out beautifully laid tables directly behind the Mosque, situated around a stage. These lucky cruise ship tourists were treated to a real Cretan evening where they were able to sample Cretan cuisine and drink local wine, whilst listening to live traditional Cretan music. There were even traditional Cretan dancers to further entertain them! What a lovely way to welcome people and it really demonstrated just how generous and hospitable the Greeks are. Apparently they organise this event for all visiting cruise ship tourists to Chania. 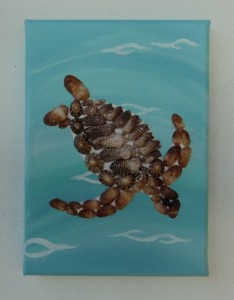 Whenever David and I are exhibiting in the Mosque we have to deal with umpteen enquiries about the old building and its history. Over the years we have learned much about it so that we are at least able to give the tourists some basic answers to their questions. One day a young couple came into the building and were particularly interested in a decorative feature in the far right hand corner of the Mosque. This ornate place, which faces Mecca, was where the head of the Mosque would stand while the Muslims kneeled on their mats and prayed in front of him. On this particular day I had been talking to a customer and when I turned round I saw this young man kneeling on his prayer mat right in front of this ‘holy shrine’, while his wife or girlfriend stood to the side with her hands shielding the breasts of a dancer in one of David’s paintings, which just happened to be hanging there! To be honest I found it quite funny and wanted to take a photo but realised that it would be very disrespectful, so of course I didn’t!

Every year my best selling mosaic has been the baby turtles ‘race for the sea’ after hatching in the sand. I must have sold hundreds and yet I have never actually seen a live one. During the exhibition I was fortunate enough to hear about a wild sea turtle that visits Chania harbour around noon on most days. So armed with my camera I walked to the area of the harbour I was told he visited and waited with excited and baited breath for my first glimpse. I am thrilled to report that Harry the sea turtle, aged between 70 and 80 years old, showed up – as close as 2 or 3 meters away from where I was standing at the edge of the water. He was huge and magnificent and I will never forget him. I was totally enthralled! My only regret is that I was so intent on watching him that the photos I took were disappointing and do not do him justice! Never mind though because nothing can diminish this wonderful experience. I sell so many turtle pictures that I almost feel indebted to the sea turtle! 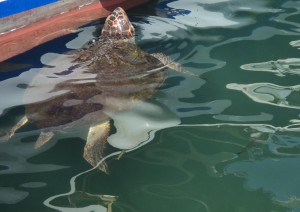 The final day of the exhibition came and went. David and I packed up our artworks and my dear friends, Rick and Jill arrived. I wasn’t able to collect them from the airport but did see them when I arrived home late that night. They came laden with all sorts of supplies for me and some lovely gifts too. I was really tired from the long days in Chania but excited at the prospect of relaxing and enjoying myself in their company. On the Thursday we spent a lazy day on Almyrida beach and enjoyed a long and boozy lunch at Atlantis Taverna, where I bumped into Nancy and Bob, a Canadian couple who regularly visit Crete and whom I’ve known for a few years. They recently bought a charming house in a village called Aspro, which is a few kilometres from Almyrida. On Friday I was back selling on the beach and in the evening we were invited to a birthday party held at Nikita’s Place in Almyrida. We had a great time dancing to 80’s music. Rick, Jill and I ate out every lunchtime and every evening for the whole week they were in Crete and it was just what I needed to recover from the exhibition and what has been a particularly crazy busy summer season. 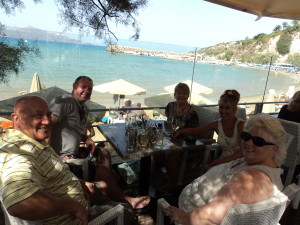 Our boozy lunch at Atlantis – Rick, Jill. Bob, Nancy and me

Disappointingly for Rick and Jill, the weather took a turn for the worst over the weekend and we had a stormy few days. The temperature plummeted, the sea turned really rough with crashing waves and it was very windy. We also had heavy intermittent rain showers. To all of us who live here, it felt like winter had suddenly arrived. It was such a shame for Rick and Jill, although the weather didn’t seem to dampen their spirits or enthusiasm! We still managed to enjoy ourselves and on the Saturday we were invited to Bob and Nancy’s new place for drinks and nibbles and were joined by our friends, Derek and Jackie too. We spent several hours drinking and chatting on their beautiful sheltered terrace, so the weather didn’t spoil that either! 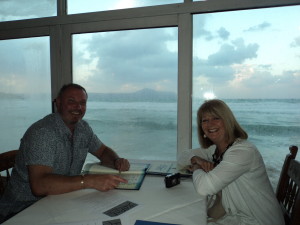 My dear friends, Rick and Jill

Now my lovely friends have returned to the UK and for the first time in a very long time, I feel as though life has returned to its normal pace and pattern. I was back selling on the beach on Wednesday 1st October and couldn’t believe how many pictures I sold. The hotels are fully booked and so there are still quite a few tourists milling around Almyrida and as long as they are there I will continue to sell, weather permitting of course.