I haven’t done much this past week, apart from working. Ian and I finished off the villa painting on Tuesday and the rest of the time I’ve been continuing with my stock build of Seashell Mosaics & Collages.
I did have a lovely day of beachcombing in Bali on Friday with two girlfriends, Jackie and Pauline.  It was also a chance for us to catch up over coffees inbetween. The weather was sunny and warm and although there were no shells to be found on the first stretch of beach, the second beach proved more fruitful – so not a wasted journey (but then nowhere in Crete is ever a wasted journey!) It’s always a bonus to have help with picking the shells as I end up with two or three times the quantity I would achieve on my own. Most of my most successful beachcombing is done in the New Year – January, February onwards, when bad weather storms churn up the sea which in turn, dumps it’s treasures all over the sand. I absolutely adore these deserted beaches when I can really appreciate their full beauty without tourists crowding them. It’s just wonderful! 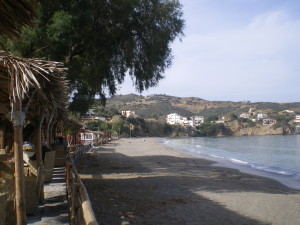 The first of four wonderfully deserted beaches in Bali

Today I went to our local Vangeli’s for Sunday Lunch because Patrick was cooking a Malaysian curry and I was definitely up for that!  It was really delicious and only cost 7 Euros with a large glass of wine included in the price.  What great value!  This afternoon my friend Lisa called round and we spent a pleasurable couple of hours and glasses of wine catching up on all our news. Most of the news came from Lisa because she simply has so much going on in her quest to settle back here on Crete and make a good life for herself again. In just three months she has done just that, as I knew she would. Lisa has found herself a charming 2-bed house for only 200 Euros a month and a cheap second-hand car to complete her independence. Her massage business has really taken off and word has spread quickly in our relatively small community, both among the ex-pats and the Greeks. Some of the stories she has been telling me about the Greek men we know have had me in absolute stitches! Lisa is tall, dark and very attractive and these last few days they have been flocking to her door! After a particularly busy day of non-stop clients – all male, she has just discovered that she has a new next door neighbour – Papa Yianni – Papa being the Greek word for Priest or such-like! Can you imagine what it must have looked like to him?  The comings and goings of so many Greek men next door and he already knows she is an English woman living there on her own? He probably thinks it’s a knocking shop!
As a matter of urgency and for the sake of her reputation, Lisa must speak her best Greek and formally introduce herself to Papa Yianni and of course, the true nature of her business! We laughed and laughed about this situation and several other hilarious incidents that you couldn’t even write a comedy about – classic!
Seriously though, Lisa is a true professional and her capabilities as a masseuse are highly respected. She has already managed to cure an English woman of her back pain in just two sessions. You can’t hope for a better result or advertisement than that, I don’t think.

Well I’ve got a few events coming up this week so I’m sure I’ll be back soon. Anyway, I’m missing ‘Strictly’!