Well it’s been another eventful week. The day my birthday falls on is also my Name Day here.  In Greece a person’s Name Day is more important than their Birthday and the fact that they fall on the same day is quite significant I think – another sign that Crete is part of my destiny and also feels like my spiritual home.  My birthday bash last Friday was great fun. Sophia and Ritchy at Captain Jack’s even put up a welcoming “Happy Birthday” poster along with some bunting and balloons. We all tucked into the Indonesian cuisine wish relish and because they play such good music in the bar all night, we spent many hours dancing the night away.

I did three days of villa painting with Ian as the weather was very good. In fact it was so hot that I stripped down to a strappy top and shorts. I was really tired though because after I finish decorating I am straight back to working on my seashell mosaics, usually from around 4pm when I am home again until about 8pm. It has to be done otherwise I won’t have enough canvases ready in time for the start of next summer’s season.

Last night I was back at Captain Jack’s for a fund-raising barbeque. The charity is Sara’s Hope Foundation – www.sarashopefoundation.co.uk In the past I have donated some of my artworks for various auctions and produced some signage for them free of charge. Ged and Julie, a wonderful couple who run the charity, lost their beloved daughter, Sara to a rare form of colon cancer when she was only sixteen. Sara’s courage and spirit inspired them to start a holiday retreat here on Crete for children and young people with cancer and their families. It is a wonderful and worthwhile cause and I will always support the charity whenever I can. 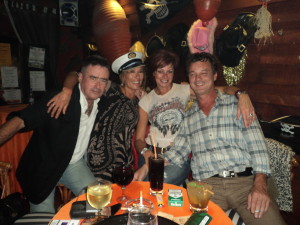 The Dancing Four – Patrick, me, Lisa and Will

The bar was full last night and there were so many people in there that I knew. The event actually started at 4pm with a music quiz and then an auction but I wasn’t able to get there until 6pm – just in time for the food!
Generally the Greeks in this part of Crete don’t seem to have any idea of how to make their tavernas warm and inviting in the winter, unless they have a zomba ( a wood-burning stove). I think one of the reasons Captain Jack’s has become so popular this winter is because it is always warm inside and the lighting is soft and inviting (oh, and very flattering!) 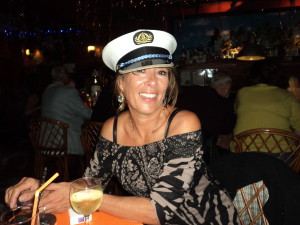 I love that Captain’s Cap!

Much alcohol was consumed, as usual, accompanied by lots of dancing. Every tune that was played inspired us to get up and boogie and actually we all became so hot and sweaty that I wrapped up my hair in a captain’s cap in an attempt to keep cool! I loved dancing with Lisa, Patrick and also Will, because he can French Jive – something I used to enjoy for a while in the UK some years ago.
Nick and Debs (a former semi-professional dance couple) used to teach ballroom dancing here a couple of years ago and I joined up eagerly. Sadly, after only a couple of winters they had to stop the lessons because we were no longer able to use the facilities at the Almyrida Residence and we couldn’t find another suitable venue. It was such a shame because so many people enjoyed learning the Cha Cha, Foxtrot, Quick Step, Rumba, Waltz and Jive – to name but a few. Now I will have to settle for watching Strictly on a Saturday night, again grateful thanks to www.filmon.com ,especially when I am not going out – I am far too delicate after last night’s partying!

2 thoughts on “Dancing the Night Away!”