Here on the beautiful Island of Crete it’s been a long hot summer and it isn’t over yet! September is proving to be a hot one too and I’m pleased to say that sales have really picked up during the last two months. Hence the reason I’ve not written for a while, because much has been happening in my life both professionally and personally and it’s all taken precedence over this Blog!

One of Almyrida’s pretty beaches where Zoe spent much of her time relaxing.

Zoe came to stay with me for a much-needed break from the stresses of her job. She was in desperate need of some rest and of course was also here to progress with her wedding plans. Rich had too much work on so she came alone.  Originally, Emma and Ralph were trying to get flights out for the same week, but sadly Emma also had work commitments and so I didn’t get to spend time with her or Ralph and oh I do miss my cute little Grandson so much!  Such is life… but I really do believe things always  happen – when they happen… and for a reason. 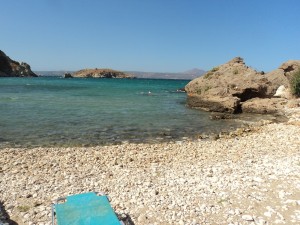 The other side of the beach, where Zoe and I spent quality time and swam last weekend.

That week with me in Crete turned out to be just what Zoe needed! We got so many important details about the wedding sorted and on the days I was selling, she was quite happy spending time by herself; lots and lots of swimming and relaxation; reading her book and feeling completely at home In Almyrida. Zoe has visited Crete so many times now, that it feels a little like her second home!  It’s the same for Emma when she visits.   I was able to join Zoe on other days and I couldn’t help taking some snapshots of the beautiful and peaceful setting we were relaxing in! I may live here but I rarely find the time to appreciate how lovely and picturesque Almyrida is!

On Thursday evening we met Neisha, the wedding planner and Kirsten in Chania – at the caterer’s cafe restaurant. Here we were treated to samples of all the dishes Zoe has decided to go for including the wine – all of which were complimentary. That done and food and wine decided, we moved onto the Harbour Front to a restaurant called Salis and who’s owner is a friend of Neisha’s. We drank a cocktail and I have to say that the food at Salis is all organically home-grown and deliciously different! I would definitely recommend this place! 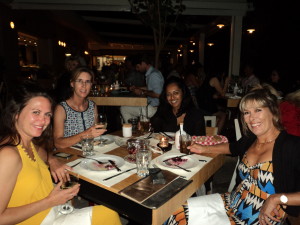 The following evening we went to Maddie’s in Kefelas, to watch a band that has been highly recommended and is a strong possibility for the wedding. We thought they were brilliant! They had everyone up and dancing all night and they were talented and accomplished musicians. When the gig had finished Zoe approached the lead and singer for a chat. What a genuinely nice guy he is, with no airs and graces and he has readily agreed to perform at Zoe and Rich’s wedding at the end of next May.  Fingers crossed that Rich will like them too, after he hears them on Zoe’s video clips and Youtube. 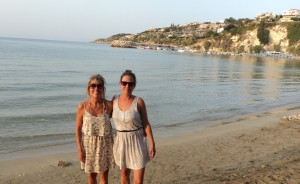 Zoe and I on the beach in front of Cafe Franscoise in Almyrida.

And so it was a different Zoe I took back to the airport than the Zoe I had collected the week before. She was tired, negative and on edge when she arrived, but rested, positive and happy when she left and although she did not want to leave, I reminded her that in just over seven months she’ll be back again for three whole weeks around the wedding. Needless to say I did my usual crying all the way back from the airport, but (practicing what I preach) with my flight back to the UK for Christmas and New Year already booked, I know it won’t be long before I can see and spend time with everyone dear to me again.

Since Zoe left I have been busy trying to keep up with demand for certain designs of my Seashell Mosaic Collages which have been particularly popular in August and September. I’ve already mentioned how sales have improved during these months and this means I have more work to fit into less available time! Same old… same old story. 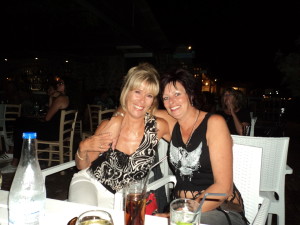 Lisa and I at Nikita’s in Almyrida last night, where 4 different bands were playing.

My social life has been busier again too and yesterday I spent the day showing my good customers and friends – Paul, Sheila and John – all round Chania and they treated me to a lovely lunch at a restaurant situated high above the Harbour. Last night I went to a four band gig at Nikita’s in Almyrida and have to say that was a cracking night! Such a variety of music styles, entertaining and great to dance to! My Friend Lisa plays the beat box in one of the bands and so I went along to support her. There were heaps of people I knew there and I partied until collapsing onto my bed at around 2am this morning!  There is a big party taking place in Plaka Square on Thursday Evening.  There will be more Live music from Backtrax and I missed last year’s party, so I was told last night that I had better be there this year!

One thought on “Picturesque Almyrida”