Since Nick returned to the UK life has quickly resumed to normal again. I have had two more selling days on the beach in Almyrida – despite the wind – because frankly, I cannot afford not to. At this time of year my bank account is at its lowest so I am desperate to start making money by selling my Seashell Mosaics and Collages to the tourists that have been flooding into Almyrida.

This time last year I was in the middle of an exhibition in Chania but this year David and I are not exhibiting until September so I have actually gained several beach selling days instead. This early on in the season it is not worth doing more than a couple of days a week. I set up my stall and displays at around 9.30am and am there all day until about 7pm. Apart from when I am talking to customers or friends, I am busy doing mosaic on canvases I have previously ‘prepped up’ at home. It would be such a waste of my precious time not to show off my skills and to let the tourists see for themselves, what’s involved in the making of my unique style of contemporary art. 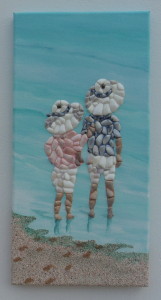 The high winds have still presented me with a major problem. Sitting there at the edge of the beach, I am right in the firing line for the winds coming off the sea from the North and the West. And isn’t it just ‘sod’s law’ that the days I carefully choose to sell always end up being the windiest! This was also the case around the same time last year and so I have been using my car as a kind of windshield, which has helped a little though I am still finding it difficult to fully relax. However, it just goes to show that nothing ventured is nothing gained. Both Friday and Monday were good selling days and I sold many pictures. But the best news of all is that I have sold well despite the increased prices. I was worried that I would not sell as many but these early indications prove otherwise. Having to work so hard during previous summers in order to keep up with demand and then still having to do all the decorating jobs in winter and spring to make ends meet, just didn’t make sense. After 5 years I thought it was high time for a price increase. At the end of the day people will not buy my pictures if they don’t think they are worth the money I am asking for them. Thankfully, most people can see the time, effort and detail I put into my artworks so this can only be a good thing.

Yesterday I received what I consider to be a massive compliment – from a tourist about the same age as me, who just happens to be an artist herself and who attended Goldsmith College of Art in London. Many years ago when I was selecting Art Colleges for a three year degree course after my ‘A’ Levels, Goldsmith College was ranked the best in the UK. My Dad insisted I try for a place there after my Foundation Course in Art and Design, but in the end I opted for a career in Advertising in London instead. It’s strange to think that this lady would have been at Goldsmith College at around the same time I would have been if I had chosen to apply and been accepted. I was always led to believe that you had to be extremely gifted to gain a place there and so when this lady told me my artworks were not only unique but beautifully executed and that I definitely had special talent, I considered what she said to be a really terrific compliment! 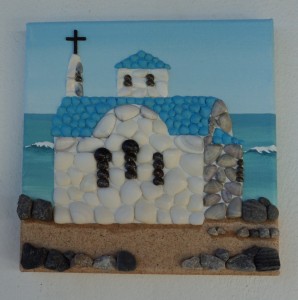 I have still committed myself to doing a few more decorating jobs and I have had three odd days of painting railings and staining pergolas. Both jobs have not been without their hazards though. It’s not much fun painting endless railings that are half covered in spiky plants such as cacti and varieties of yucca plant! Then today I have been staining a pergola – again in situ, in the full sun and which was partly covered with a thorny bougainvillea! We were able to untie most of the plant from the pergola so I could stain it more easily but I still found it difficult to work round at times and was frequently stabbed by the vicious thorns. Worse still was the heat and the resulting sweat dripping into my eyes and making them sting. Where was the wind to cool me down? Yesterday while I was selling on the beach I was wishing it away but today I was praying for its return! Nevertheless, I get paid well and so it was worth putting up with all the discomfort.