What a windy week it’s turned out to be! It started on Sunday when Nick and I decided to drive down to the South coast – even though the weather forecast was not good and that thunderstorms were likely. We picked this day because we were running out of time to fit in the beaches where I really need shells from. Nevertheless the first half of our journey was in bright sunny conditions but the drive up and down the mountains was mostly through swirling cloud and it turned stormier and stormier. As soon as we arrived at Frangokastello we parked up, crossed the road to a huge wooden taverna for a drink and suddenly the heavens opened – we were just in time! The rain lashed down onto the wooden roof and came pouring through everywhere. There was nowhere to sit or stand without getting wet! It was bizarre to see and actually made us laugh! After about 20 minutes, the storm passed and we had sunshine and blue skies again! 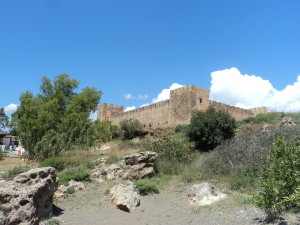 Frangokastello, translated means Venetian Castle and it is 600 years old. It has a fascinating history attached to it which I am very tempted to relate here but which would take too long! The Castle is situated on a hill above a large wide beach. It is this beach that I collect all my ‘turtle’s flippers from, especially the larger ones. Because my turtle seashell mosaics are still my biggest seller, I need lots of them. There is also another beach a little further along where I also collect them and so we spent a couple of hours there too, but it was very windy!

The following day, on Monday I decided to sell on the beach again. I had been checking the weather forecast every day and it looked to be a warm, sunny day with a manageable breeze. Wrong! It turned out to be a bit of a nightmare for me! A huge gust of wind came from nowhere and wreaked havoc with my whole display and set-up! Two trays of tiny shells flew off the table and scattered everywhere. The parasol which was in it’s stand but not open because it was already too windy for that, opened itself and flew out of the base, across the road and into the car park! At the same time my front three display panels broke free of their restraints and my beautifull canvases fell all over the place. I was in a state of total panic! Thankfully people came to my rescue and although the wind was still gusting, we managed to get all my pictures safely inside the car. I will have to do some repair work to the panels and the parasol but was hugely relieved to discover that none of my pictures were damaged. Every time this sort of catastrophe has happened, my canvases have survived and I forget how robust they are. I have created my artworks to last and very often have to tell people that they are not as delicate as they look. But these 3D box canvases are light in weight and this makes them easier for the wind to pick up. It is my biggest worry when selling on the beach on unpredicted windy days. I just can’t risk returning until these winds have died right down. 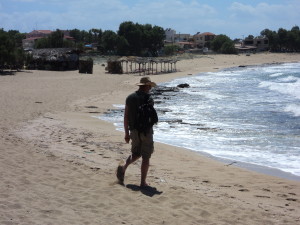 Nick, on the second beach at Stavros, which was deserted!

On Tuesday Nick and I had a lovely day at Stavros, which is situated near the Akotiri and the Airport. It’s a beautiful resort with some great tavernas and two very different beaches. Again it was quite windy but the sun was easily hot enough to keep us warm. I beach combed both beaches whilst Nick relaxed, listening to music and reading his book. We had a lovely lunch in our favourite taverna which is opposite the first beach and then spent the late afternoon hours lazing in the soft sand, chatting and reading. You just can’t beat lying in the sand on a beautiful beach, listening to the sea. After my disastrous selling day, this was stress-relieving relaxation – at its best! 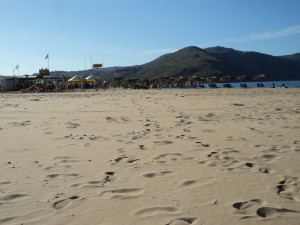 A small part of the long sandy beach at Georgioupoli

On Thursday, the last day of Nick’s holiday, we agreed to spend the day on his personal favourite beach, in Georgioupoli. Really, it is a stunning beach, several kilometres long, very wide and covered in fine soft sand. When your feet have been stuck inside socks and shoes all winter, the feeling of walking barefoot on this sand is just the best! Thankfully, the winds appeared to have gone and there was just a light breeze which helped keep us cool. We found a quiet spot and settled down for another wonderful day on the beach! I enjoyed, as always, hunting for seashells and we had another lovely lunch at the Sun Kiss beach bar, 200 meters away from us. It was hard leaving that beach – even at 6pm. 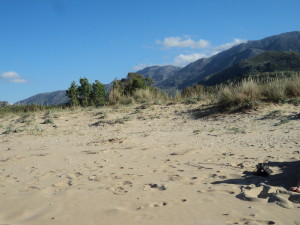 The breathtaking scenery behind Georgioupoli Beach

So yesterday I took Nick to the airport, knowing I would feel a little low and be missing his company.. and I am! I have had such a fab two week break myself, with plenty of much needed rest. Nick has been such a love too, sorting my balcony blinds (I didn’t have any and have wanted some for two years) and treating me to an internet signal booster. This extra modem, which is programmed into my laptop, boosts the signal I receive from the landlord’s modem from two-bar strength to all five! I can now sit on my balcony sofa with a full signal whereas before it was little or nothing.  I feel that I have totally maximised the internet service I receive here on Crete. It’s my most precious utility while living here and amazingly, it’s free!