I am pleased to report that the temperatures gradually came down to a more normal level and by mid August, were a lot more bearable, especially with the return of the cool breezes coming off the sea. By 9th August I was back selling from my stall by the beach. It was busy in Almyrida and Plaka yet still the majority of tourists were from France and Germany. By my recollection of the past 13 summers in Almyrida – I have never seen so many French and German tourists. There were hardly any British tourists this August and I am not surprised, given the way the UK government has made it so difficult for British people to travel this summer 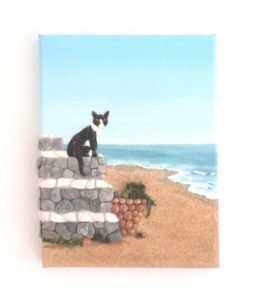 Popular this summer – Cat on Steps in Seashell Mosaic Painting

Now we are already into the middle of September and I have finally seen the return of many British visitors and many who weren’t able to visit Crete last year. It is lovely to see familiar faces again and to welcome them all back! I sold a total of 25 Seashell Mosaic Paintings during the 3 weeks in August and have sold a further 15 so far this month. Sales are down by less than a half to what they were pre-covid. But when you consider all the extra outlay on covid tests for travel – the tourists that do make it here inevitably have less money to spend. I feel like I’ve done as well as I could have hoped for, even managing to sell some more expensive artworks which I would not normally display and I have had to remove these pieces from the Etsy shop. My new cat designs have sold well this summer and the little mermaid too. 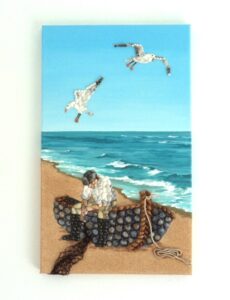 Not normally for my beach stall, sold this September. Fisherman, boat & Seagulls in Seashell Mosaic Painting.

It’s been a quiet summer for family and friends visiting this year, with only Emma, Ash, Ralph and Neve’s holiday so far because sadly Zoe and Rich weren’t able to make it here this summer. My friends Jill and Rick were due at the end of August but felt they had to cancel because of the constant changes and restrictions the UK government is making on travel. However I am thrilled that Caroline and Tony are flying out for 5 days on the 23rd October. I am really looking forward to spending some quality time with them as it’s been a while since we had time to properly catch up. 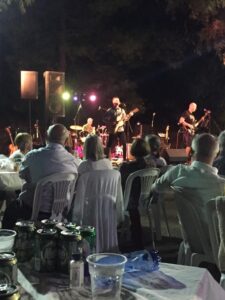 The music festival in Gavalochori

Local  restrictions here on Crete have meant  that live music gigs have been few and far between. But now they are starting to pick up again. Last weekend I went to the music festival in Gavolochori, held at a large open-air setting with many different bands playing and despite the fact that we weren’t supposed to dance (duh?!!) – we were all up dancing in the street anyway!  Last night there was a gig in the local village of Drapanos and next week Carl is playing at Nikita’s in Almyrida.  Generally there are more events planned for the coming weeks. 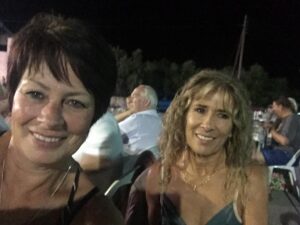 Lisa and I enjoying the music at the Gavalochori Festival

Just when I thought we’d seen the last of the high temperatures, this weekend it has turned hotter again with temperatures of 34 and 35 degrees. The sea is like a mill pond and the atmosphere is hazy and airless. When you step outside it is like entering a sauna and I am really hoping that by Monday there will still be sea breezes so that I am more comfortable when I am selling at my stall in Almyrida. 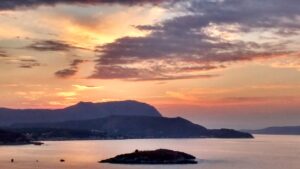