After Nick went back, at first the weather was settled and warm so I returned to my winter job of painting and decorating – all outside work. This time (unfortunately) I did two days of painting awful black railings. However, about ten days ago it all changed and we had horrendous storms that heavy rains and gusty winds had whipped up. Almyrida was totally flooded and the large Psaros restaurant, which is the last on the beach strip before the little harbour, was left with all its sea-facing windows shattered! Believe me – the beaches are a mess! The rough seas have thrown so much debris onto them and beyond. When tourists flood in during the summer months, they are seeing totally clean beaches but during the winter it is quite a different story! Because I hibernated for a few days, the photos I have here are courtesy of Ritchy from Captain Jack’s. They were right in the middle of the storm and their seaside terrace took a real battering! There is much clearing up and repairing to do all down Almyrida seafront. 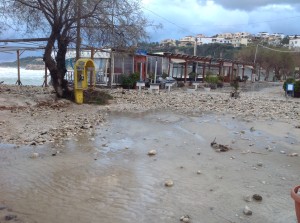 For three days last week I cocooned myself in the apartment in Plaka and stocked up on milk and Calor gas (amongst other things!) because I knew that I wouldn’t want to venture out in the gusty winds and heavy rains. I was just keeping warm and creating more of my seashell mosaic pictures. I have to say that I have actually spent most of my time working on my designs, especially a few new ones and I completed Jenny’s triptych. 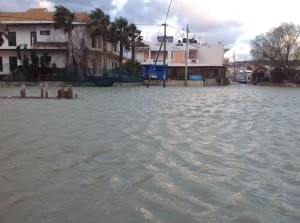 The centre of Almyrida – totally flooded!

I finally ventured out on Sunday night for Jeff and Shauna’s engagement party, held at our local in Plaka, at Vangeli’s. There was quite a crowd in and it was good to catch up with everybody. During the course of the evening Terry begged me to go to the ‘open mic’ night in Captain Jack’s the following evening and I was invited to a dinner party on the Wednesday – so three engagements in almost as many days. Yet it was nothing for almost three weeks because I just didn’t feel like going out!‘Open Mic’ night at Captain Jack’s was great! Ritchy and Sophia always give a warm welcome and it’s always warm and  cosy in there.  Live music usually creates a better atmosphere and I enjoyed meeting people I hadn’t seen for a while so it was good and I am glad that I made the effort to go. I nearly didn’t, because the party the night before went on late and I drank enough wine to give me a fuzzy head. The last thing I fancied doing was going out again but have to admit that because the gas bottle wouldn’t work –  I didn’t have heating at home and so that was the decider! 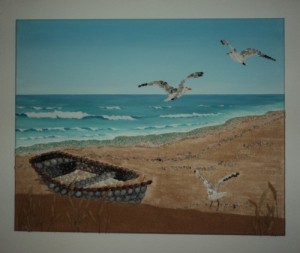 So the next day I had a list of things to do, top of which was taking back yet another dodgy gas bottle. The week before last I thought my Calor gas heater had finally packed in and I realised that this time I would have to buy a new one. The two heaters I have had over the last five years were both second hand and were given to me. So I was lucky there. Thankfully though, Ian offered to buy it at a shop in Kalives where he gets discount and so I got the heater at 25% cheaper – a result!  Even if it still meant that I had spent seven long hours painting railings to pay for it! But the gas bottle I had bought wouldn’t work in the new heater either. Basically, in the last ten days I have bought not one but two faulty gas bottles. I expect the old heater probably still works – with a ‘proper’ gas bottle and I needn’t have forked out for a new one! It’s been a real pain and a hassle and these bottles are damned heavy when they’re full! Never mind…these things are sent to try us.

After I’d picked up my replacement bottle from Plaka hardware, I drove into Kalives to do a few bits and pieces. I had a picture to post for my lovely American friend who has spent many hours of her time collecting the marvellously-coloured coquina seashells for me, from the beach near to where she lives. I am still waiting for the package to arrive and am really excited to see what Jennifer has collected. As a big thank you I am sending her one of my popular baby turtles mosaics and really hope she likes it. 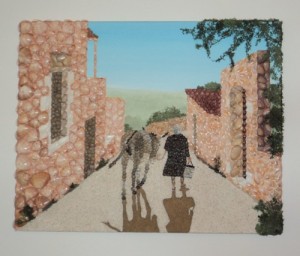 When I’d finished all my various errands I was about to head home when I thought that I’d just have a quick look on Kalives beach to see if the bad weather had brought up some good seashells. I didn’t have my usual beachcombing kit with me and so I had to empty the shopping bag to put them in instead. The weather was windy and threatening rain but it was dry long enough for me to find loads of great seashells because there were so many that had been washed up. Then the heavens opened and I was forced to head back to the car, having no waterproof jacket (usually stowed in my beachcombing kit bag).

As I got close to the car I reached into my chunky cardigan pocket for the car keys and they weren’t there! As the rain thundered down I rushed back to the shoreline and searched frantically for them. I ran like a headless chicken up and down the beach, looking like a drowned rat and cursing myself for being so stupid! I was worried sick that they had been washed out to sea because the waves had been washing all over my ugg-type boots while I was picking the seashells!  After about ten minutes of retracing all my steps, over and over again, I was already working out what I would do if the keys really had been washed out to sea. I was by then, so wet that I just couldn’t carry on so I ran all the way to the nearest open taverna and asked if there was anyone who could break into my car? I’d just locked the car at the edge of the beach, with phone and money inside so I couldn’t even call a friend to my rescue! Luckily a couple of women who were having coffee in there, kindly offered to run me back to Plaka where at least I had spare house and car keys. Whilst they were finishing their coffee I rushed back to have one final look for them on the beach. I said a quick prayer to St Christopher (patron saint of lost and found) and a few minutes later I spotted them! The relief was incredible! All the way home I laughed my socks off about it but resolved never to leave the car again without at least a bum bag to stow phone and cash, especially in the middle of winter!

That was two days ago and aside from my art I have been busy progressing the fight for the return of my money from www.cretanlife aka www.rentapropertyincrete.com. I have been hounding all the investors and getting them stirred up for some much-needed action! We have had lots of emails and phone calls and I am confident that we will secure a good result soon! All of us have agreed that this woman, who appears to have no conscience, should not be allowed to get away with stealing so much money from her family and life-long friends. The fact that Hughie is dead should not stop her from doing the right thing. But it is as I have previously mentioned, Denise puts her passion for spending everyone else’s money into her ‘high maintenance’ lifestyle, ahead of any decent morals that most of us possess. She absolutely cannot be permitted to continue her spending spree at our expense any longer!

Then last night I went to Robert’s dinner party, which was a nice change. He cooked up a tasty beef in guiness stew, which went down very well – perfect for this really cold snap of weather we’re having. The company was good and we spent much time debating all the issues that are currently going on with the Greek Government. I won’t go into all that now but suffice to say that the picture isn’t looking so rosy right now…