My sister, Leonie returned to Cyprus and the following day another sister, Annette and her husband Ian came to stay for a week. So I have not really had a minute to myself to write this blog.
Needless to say, we all had a great time. During this early part of the season I work on the beach only on Mondays and Fridays but I am more or less free the other days to take my visitors to different places for days out. In the evenings we are dining out at the local tavernas in Almyrida and Plaka. 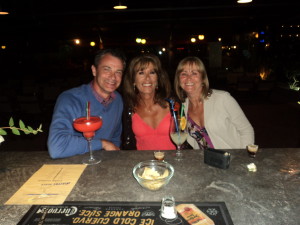 Ian, Annette and me at Nikitas Place enjoying some of Tito’s new cocktails

Sometimes though, even here – life isn’t all roses! On Saturday I took Annette and Ian to Geourgoupolis – a pretty resort about 20 minutes from where I live. It boasts the longest sandy beach in Europe and I do a lot of my beachcombing there in winter. Leonie and I also go there to visit Mike’s Oasis, to play Canasta. Before we left some Greek guys turned up at my apartment and I recognised them as the landlord’s cousin and friends. They have been before to offload tables and chairs from the landlord’s taverna in Plaka Square. There is a large storeroom which is accessed at the far end of my courtyard garden and so I assumed they had come to remove some tables and chairs. We returned from Georgoupolis early afternoon because my sister had a problem with her eye and found they had tacked an ugly black water pipe all along the outside of my courtyard, spoiling the pretty ‘idyll’ I had spent hours creating with whitewashing and plants. The landlord had told me nothing and as he was busy at the taverna I went to speak to his wife, Lefteria, to ask what on earth was going on! In her broken English she explained that it was something to do with a new waste system that everyone in the village must organise. What these Greeks should have done though, was to take the piping inside the storeroom but because they had just chucked everything (including huge glass and wood panels that encase part of the taverna in the winter months) inside, without stacking the furniture properly, the workmen would have had to rearrange all the furniture to install the piping. This is not the Greek way – they take the easy route and hang the consequences! They certainly did not care about spoiling my pretty courtyard. I was devastated! 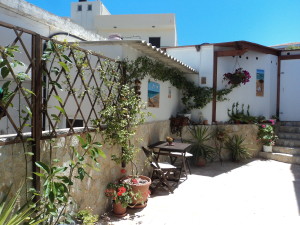 Part of my Courtyard Garden

We studied what they had done and realised that they hadn’t quite finished the job. The end of the pipe was left in a large coil to be drilled through the wall at a later date (this could be anytime from a couple of days to 6 months!) To cut a long story short, I decided that if they couldn’t be bothered to route the piping through the storeroom, they could take it over the roof instead. 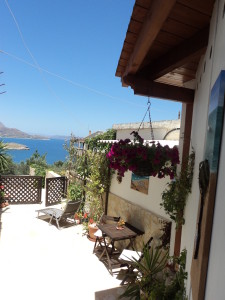 So I enlisted the help of my good friend Ian, to detach the piping from the courtyard and re-route it across the storeroom roof. Whilst Ian was up the ladders the landlord, Taki, turned up ranting and raving! The language barrier is always a problem here and after much gesticulation I was able to convey my plan to him and so calm him down. I can only hope that this message is correctly conveyed to his cousin when he returns to finish the job. I am not taking anything for granted and half expect to return home from a selling day on the beach, to find the ugly black piping all over the courtyard again!

The same day we returned from Georgoupolis, 4 Russian tourists came to my apartment to buy some of my artworks. Everyone knows where I live now as I have some of my pictures hanging in the courtyard and front balcony. Unfortunately, while they spent some 45 minutes deliberating on which ones they wanted, the two small boys they had with them, wreaked havoc in and outside the apartment. I was on tenterhook the whole time because these four Russian women would not keep their children under control! It was a real nightmare trying to stop the kids from touching everything on my work desk, my fridge magnets and all the shells covering the soil in the plant pots in the courtyard. Thank God that at least they bought 3 canvases to make up for all the chaos their unruly children caused!