How strange and sad it is to see everywhere so quiet and deserted for the second year in a row. Both Almyrida and Plaka would normally be buzzing at this time of the year, yet there are barely enough tourists to warrant all the restaurants and shops being open. Indeed everywhere is open but everywhere is almost deserted!

They look good together! The last of my new tropical fish designs in Seashell Mosaic Collage 20x20cms each – available seperately or together as shown on my Etsy shop, SeashellBeautyinArt.

I feel the same as I did last summer, chomping at the bit to set up my stall and start selling again. I am missing Almyrida’s tourists as all the local businesses here are. But it’s more than that, it’s the buzz and the atmosphere I’m missing.  I am pinning all my hopes on a possible late season starting in July. With regard to the UK tourists – sadly I think the UK Government’s decision to keep the Greek Islands off their Green List, is weak and unjustified, like last year. Still what can we do except to remain positive for the later summer months. 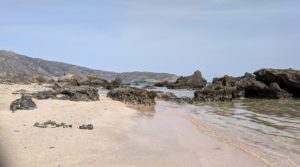 A small part of beautiful Elafonisi

On a much happier note – on May 1st, Lisa, Debbie and I had our wonderful beachcombing trip to Elafonisi. It’s a long drive but absolutely worth it! We were surprised to see more people there than we had expected. But it was a warm sunny Saturday which meant that many Greeks were there too. You are hard pushed to explore the whole of Elafonisi in just one day. It is too vast and there are so many coves and beaches to cover on foot. Nevertheless we made the absolute most of our precious time there and we all came away with bagsful of ocean treasures to use in our crafts. It was wonderful to cool off by walking through all the shallow lagoons. 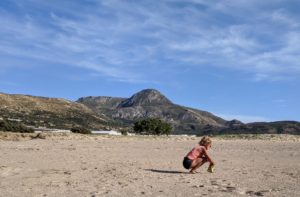 In the following weeks Debbie and I visited Stavros, Bali and Falasarna again. Lisa was unable to join us because of work commitments. When we arrived at Falasarna we were surprised to be approached by a film crew! A Greek filmmaker had come to Falasarna to make a short documentary about the plight of the Greek tourism industry here on Crete. He wanted to interview me after Debbie told him we were there to collect seashells for the art pieces I create and sell to tourists. He said he was making the documentary for the BBC and I thought, really??
I actually asked him if it would take long, because I was itching to get down to the shore! Afterwards they followed us around for a while, also using a drone. But we ignored them and just got on with our beachcombing. 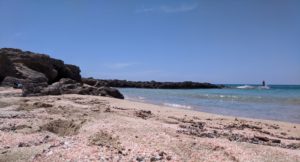 Two days later Nick was at ours doing a job on the roof and he told me he’d been quite shocked when he saw me on the BBC News the day before! I honestly never expected that! They had edited the interview down to just a few sentences but the written version of the full film was published online, where my name and mention of my Seashell Art appeared in dozens of news journals around the world. Wow.. I really did underestimate that Greek filmmaker and all this is good for raising my online profile. If I can find out how to put the YouTube link into this post, I will.. because the film is only 1 minute 16 seconds long. 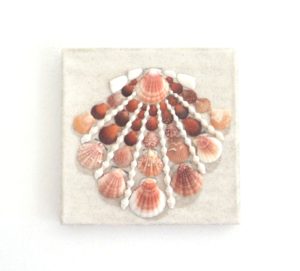 This 20x20cms Scallop Seashell was made from tiny pink scallops that I’ve collected over the years. Available to purchase from my Etsy shop SeashellBeautyinArt.

So we have finished with beachcombing now until at least October or November. It is far too hot to be walking in the full sun all day and anyway – the seashells are just not there anymore. Falasarna was the best of the last few beaches we visited. Stavros and Bali had very little to offer.

Also it is too hot now for power walks and so I have swapped them in favour of a long refreshing swim in the sea instead! For the last two weeks I have been feeling like a tourist myself – every time I nip down to Almyrida, usually mid afternoon for my swim.  I never had time to do this pre-covid as I was always either selling or working on my Seashell Mosaics at home.  I’ll take my book and Sudoku with me and spend a blissful two or three hours by the sea. A long cool drink from the taverna behind guarantees a free sun bed. All of a sudden I am on holiday! Often I have the company of friends but sometimes I am just happy to be by myself, appreciating the wonderful surroundings, my lifestyle and thinking of how lucky I am to be here as a resident and not a tourist. I get to stay here!
I finally picked up my new Biometric ID Card, so I am safe to remain here on Crete for the foreseeable future. Oh lucky lucky me! 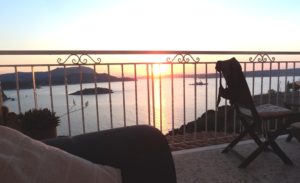 Enjoying the sunset on my balcony sofa after my swim!