Everything that has happened during this past month has been completely overshadowed by the arrival of my new baby Grandson, Ralph! Having had two beautiful daughters, a grandson was just what I’d been hoping for and he is just gorgeous! He also shares my own scorpio birth sign, having come into the world on 15th November. I have loved all my Skype calls with Emma – Ralph snuggled so contentedly on her chest and last weekend he was sleeping peacefully on his doting Aunty Zoe’s chest! I am counting the days – only 3 left – until I can hold him in my arms too! I am overjoyed and truly thankful that he is simply perfect! 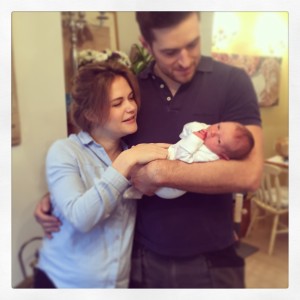 To backtrack a little – I really had a fab Birthday this year! The trouble with me is that I get so engrossed in everything that’s going on in my life, that the last thing on my mind was my Birthday. I wasn’t interested in arranging anything for it because there have been too many more important things going on that have taken precedent. If it hadn’t been for Nick I probably would have stayed at home and worked on my mosaics. Nick organised for a crowd of us to eat a slap-up Sunday Roast at ‘The Retreat’ in Kokkino Chorio. High up at the top of this village The Retreat boasts the most spectacular 180 degree views.  It was absolutely delicious and by far the best roast dinner I have eaten in Crete! It was a glorious warm day with blue skies and plenty of sunshine – and was just what I needed! It also happened to be Remembrance Sunday and the restaurant was packed with a lively atmosphere. 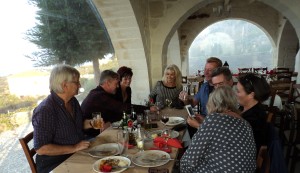 Sunday Roast at The Retreat on my Birthday – a few of us still round the table.

Once again the Almyrida Xmas Fayre was a huge success in raising much needed funds for several charities, with literally hundreds of people from far and wide arriving all day long to soak up the festive atmosphere. The weather was fine, the food fantastic and I loved the hot mulled wine and the live music! David and I set up our stalls in the usual spot and nearly everybody we knew stopped by to chat and exchange news. I did exactly the same as last year and sold four pictures, but it is always about the exposure and what may come of meeting new contacts, that counts. I was so busy socialising that I hardly took any photos and anyway, with the event spread across both major hotels – inside and out – I couldn’t possibly encompass the enormity of the event in one photo – unless it was taken from the air! I just love the Almyrida Xmas Fayre for the social occasion that it is… and it is quite easily the biggest event in Almyrida’s social calendar.

But on a more serious note – problems with my PC continued and actually got far worse! The shop I initially took it to, returned my PC to me with a major overheating problem which I did not have before. I was no longer able to stream UK TV through it and so I contacted ‘TV Tony’, who sorts out all the expat’s TV requirements here on Crete, to ask him about installing an Android Box. When I told him what had happened with my PC, he put me in contact with a guy called John, whom he highly recommended for any computer repairs and problems. When I told John of my disastrous PC experience he said, ‘Oh dear!’ It turns out the people who run this shop are absolute cowboys and a great deal of John’s work has come as a result of their botch-up repairs! They charged me a total of 175 Euros for an inside clean, installation of Windows 10 and a new hard drive. I actually brought my laptop into the shop, asking for a new hard drive but they insisted I had the clean and the Windows upgrade. It turns out the inside clean was never done, Windows 10 was not activated and the new hard drive was so small in capacity that I had almost filled it already!

John took photos of the inside of my PC, which clearly showed one of the fan wires not connected properly, dust and fluff everywhere and the PC reassembled so badly and with such little respect that there was a ‘hump’ just below the keyboard and one of the plates underneath was really squiffy! I was so angry! This shop has had my PC for over two weeks and returned it to me in a far worse state than when I had handed it in! So, armed with these photos and geared up for a fight, I went into the shop and after a long meeting with its owners and the technicians I was given a full refund – which is exactly what I demanded! After all, I needed my money back in order to pay John to have the repairs done properly. And what a good job he did! It was like getting a new computer and now it works like a dream. I will not be going anywhere else for my laptop repairs – other than John in the future.

Needless to say, my work has suffered and I have lost precious production time over these last six weeks. Time I cannot afford to lose since I sold another 345 of my seashell mosaics and collages this year and I have commissions still to start. One in particular that I am itching to get creative on and which I will not now be able to do until early next year.

I also had a nightmare with one of my shell parcels arriving from the States. The supplier sent it via DHL for the first time and it ended up in customs for over a week – for no particular reason! Greek customs emailed me the most ridiculous questions and then charged me a further 134 Euros in clearance and Tax duties for the privilege! I have tried in vain to get the extra charges refunded, but to no avail! It appears that recently all packages leaving the states and entering many European countries are now being heavily taxed. Even the DHL rep in the van that dropped off the parcel told me I should never use DHL for shipments out of the US. This particular parcel had the most precious of all my shell orders in it and to date has now cost me a grand total of £363.40!!! It is becoming so expensive for me to get hold of the precious coquina that I use in so many of my mosaic designs, that I am seriously considering a business trip to Florida next year, doing my own beachcombing there and filling a whole suitcase with them! 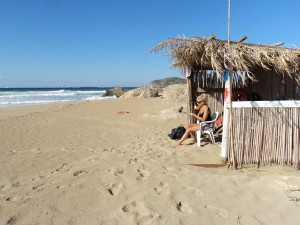 Taking a luch break on the wonderful deserted beach of Falasarna

For weeks and weeks the weather on Crete has been wonderful! I remember a Greek telling me towards the end of the summer, that it would stay warm and sunny right up until Christmas this year and he was absolutely correct! The Greeks are so good at reading the weather and I also remember when they predicted that really windy summer we had a couple of years ago. With all this wonderful warm sunshine we’ve been having and dressed only in shorts and vest top, I have had three amazing beachcombing trips. I have been to Frangokastelli, Falasarna and Elafonisi beaches – all of them yielding bumper tubs of fabulous seashells. I could hardly believe my luck at Elafonisi last Sunday! I hopped around that beach like a kid in a sweet shop! Sometimes the shells are just not there and it is a question of being in the right place at the right time. Well it certainly seems like I struck lucky – at least on the beachcombing front! 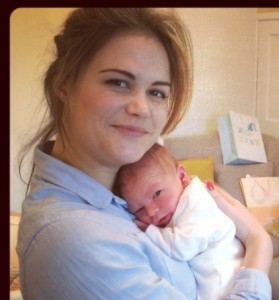 Emma with my gorgeous grandson Ralph!

Such is life…..up and down like a yoyo sometimes! But now, all I have to do when life gets me worked up (which isn’t very often, I have to admit!), is think of my beautiful Grandson! I fly back to the UK on Tuesday and this time I will be staying for three weeks. This of course, is due to the arrival of Baby Ralph and is why I am returning much earlier this year. I will be spending a week with Emma, Ash and Ralph first, then I’ll be based at Karen and Mike’s for the middle period and finally driving back with Zoe to Norwich for a few days over Christmas. I will actually be back for my first New Year on Crete! Anyway, I am getting really, really excited now…….!