For several weeks it has been really cold and we’ve had rain almost every day. So this winter on Crete has been a real yoyo between hot and cold temperatures. It’s been difficult to plan anything, especially beachcombing and long walks. The price of petrol has rocketed here (as all over the world) and we are paying 2.10 Euros a litre at the pumps – the highest in Europe! Consequently the cost of heating oil (also petrol) is the highest it’s ever been. It’s like burning money and I have been doing without the central heating, wearing heaps of layers including some toasty warm fleece leggings Emma gave me, which I wear under my Jeans. 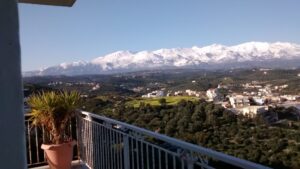 The cold weather has meant more snow on the mountains

I have various methods of keeping warm from the 10 years I never used central heating. I have an electric blanket on my bed, an electric oil heater for warming my clothes, long hot baths to warm my bones and a fleecy electric blanket Karen and Mike bought me a few years ago, which I can wrap myself up in when I’m just sitting on the sofa in the evenings. All I have to do is think of those poor Ukrainians (10 million of them!) who have been forced to leave their loved ones and the comfort and warmth of their homes.. trying to escape a war in freezing and snowy conditions…
and I know how lucky and blessed I am. 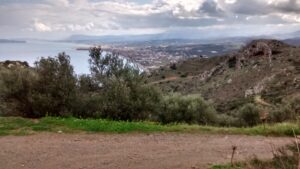 Despite this being the coldest winter I can remember for a good many years, luckily there have been odd rain-free days on which to enjoy the Happy Wanderers walks. Recently we’ve walked to Kolympari and Afrata, Stilos and Katsomatados near Topolia. It was a particularly lovely day on the walk from Katsomatados.  We climbed 2044 feet and followed sheep and goat trails along the hillsides, winding back down through Olives and chestnuts on dirt tracks back to the village of Katsomatados. 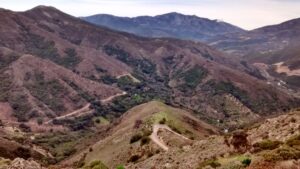 We had an amazing lunch at the large taverna there, where the owner had just hosted a large Greek wedding the day before (Saturday) and had run out of beer! There were at least 20 of us and while he sped off to get some beer – bearing in mind it was a Sunday – he left us all with heaps of fresh walnuts and raki. As is often the case with these remote tavernas, there was no menu – only what could be rustled up with the assistance of a few local villagers, the enormous grill was fired up and all the food was fresh and organic. We never knew what was being served next but there was plenty of food and village wine and even with the guys drinking beers – the bill was only 17 Euros split equally between us. The meal took as long as the walk – about 4 hours and we all had a jolly good laugh! Wonderful walk, wonderful meal and wonderful company… what more could one ask for? 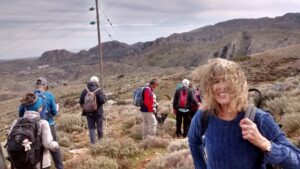 There has only been one of David’s walks, since my last post, that have been able to go ahead due to heavy rain forecast every Wednesday for weeks! But we did manage Wednesday last week, when we were due to walk in Ramni. However, driving up the small mountain road towards Ramni, we came to serious landslides blocking the way further. So we had no choice but to turn back and as we had just passed the road to Macheri, we decided to walk all round that area instead. I was quite pleased about this forced change of plan, because about 12 years ago, on one of David’s walks I had noticed a small charming Greek village house, which I took photos of. Actually it was the typically Greek doorway that appealed to me and a couple of years later I had created my Greek Blue Door with Steps design, which is still popular today (I sold one last summer). It was strange to see the same little house again, sandwiched between two larger renovated buildings, and now looking sad, neglected and derelict! 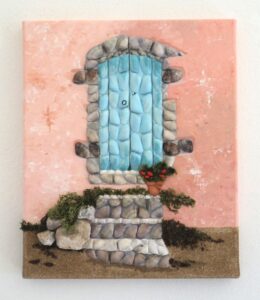 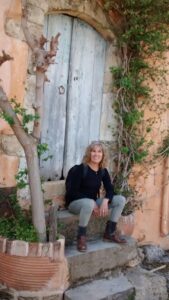 The other interesting thing about this walk was a slight detour we took after David told us that there was a sacred site with a cave believed to have been under the sea eons ago, and said to be littered with ancient seashells and fossils. Of course I immediately wanted to go there and Regine opted to follow me, whilst the rest of the group remained below. It was an awkward climb up through tough and dense overgrowth, only for us to end up against an old rusted wire fence. 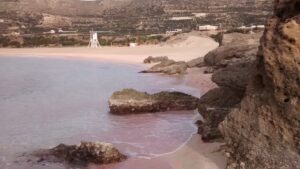 The far end of the large beach at Falasarna

We could see that the cave and the outside area looked fascinating and so we refused to be put off. It was really hard going but we followed the fence all along the full length of the slope, looking for weaknesses or ways we could penetrate the area. My goodness – probably because this was deemed a scared place – they made sure this fence was impenetrable! One day I will go back there with Regine and Debbie and some heavy duty wire cutters or a chainsaw!! Haha! It was certainly remote enough that we wouldn’t be seen and we would make sure we secured the place afterwards. 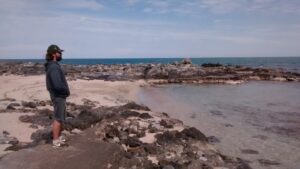 With all the storms and the rough seas, this is the optimum time of the year for beachcombing, as proved by all our previous trips this year that have yielded hoards of beautiful seashells and sea treasures. So as soon as a sunny day was forecast we always head for the coast. In mid February Debbie, Lisa and I visited Falasarna and were well rewarded by heaps of brightly coloured seashells, particularly the rarer red coquina. I was thrilled because I also collected lots of the shells I needed to finish the building on my Greek village commission for the lovely couple who are finally getting married here in May. 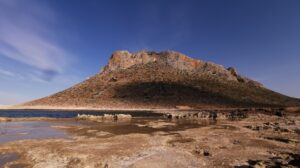 Debbie and I also went back to Stavros and Ross was over on Crete visiting so he tagged along with us. We decided to scope out a couple of nearby small beaches we’d spotted on Google maps and it turned out we only had to drive a couple of kilometers past Stavros to reach them. One of these little beaches was just gorgeous and full of interesting finds and teeny weeny shells. There were tons of shells to be had at the main Zorba’s beach too. We had a really fab day out, as usual and Ross even felt warm enough to do a little sunbathing!
More recently, Debbie and I also spent another day at Georgioupoli and were so overwhelmed with the sheer volume of shells that had washed up there last week that we forgot to take any photos. 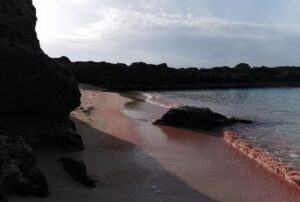 Last Saturday we all went to a Carl Axon gig in Vamos and it was a really good night apart from the fact that we now know someone there had Covid. Now we have all tested positive. Although the symptoms are so mild, it still means we are stuck at home self-isolating. There was a big party for 3 people celebrating their birthdays scheduled at the Loft tonight, which has consequently been cancelled. I was due to go on a major walk with the Happy Wanderers on Sunday, which had already been cancelled once because of bad weather and more snow falling in the mountainous areas we were due to climb in. It will be quite a strenuous walk and climb and I was really looking forward to it! What a bummer! I feel ok – just a few sneezes and a slight runny nose.

Typical isn’t it?! From today there is going to be a big difference in the weather. Temperatures have shot up to 19 degrees today and are set to keep rising until 23 degrees by next Friday. At least I can still do my power walks because I don’t come into contact with any other people. In fact I could probably still walk with my friends who also tested positive, without us being irresponsible in any way.  So I will just take this opportunity to spend more time working on my Seashell Mosaic Collages, which I absolutely love doing anyway!