I almost couldn’t believe that my return journey to Crete, after 16 lovely days with my family in the UK, was totally stress-free and absent of any delays. After the awful trip from Chania to Manchester and having seen and heard all the horror stories – I was quite prepared for another rotten travel experience and had decided I would just go with the flow and not let it get to me.  My outbound flight had been delayed by over two hours in Chania and when it finally arrived in Manchester, there was no staff to bring steps so we couldn’t get off the plane! Much later in the baggage hall, there was nobody to take the suitcases off the planes and onto the conveyor belts.  More and more flights were arriving but there was not a bag or suitcase to be seen! I was worried about my daughter who had to leave the car park because it was getting too expensive to stay. When I eventually got my bag (and I was one of the lucky ones!) I had to walk way beyond the airport to find Emma waiting by her car. How ironic that I was actually looking forward to travelling again – post pandemic. Yet it was far worse because the travel industry was so totally unprepared for the sheer volume of people wanting to finally get away. What a fiasco! 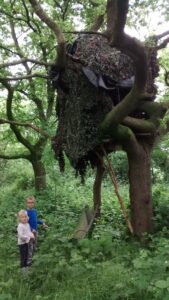 Needless to say – however bad the travel experiences – it is always worth it to spend such quality time with my family and grandchildren. It is a real holiday for me and I enjoyed and loved every minute of it. I stayed with Emma, Ash, Ralph and Neve for the first 9 days, happily looking after Ralph and Neve for the two days Emma was working. Luckily the weather, although not as good as I’d hoped – was dry and quite sunny at times so we were able to visit the park and go exploring in the woods where we found a treehouse! 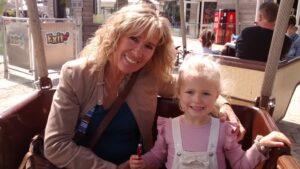 The military base where they live, gave out free tickets to Flamingo Land and so we all went there for the day and the weather was really nice. As it was half term it was very busy and queues for the rides were taking an hour or more. We decided on only a few choice rides, Ash taking Ralph on the steepest rollercoaster in the world – no less – whilst Emma and I queued for a couple of rides with Neve. 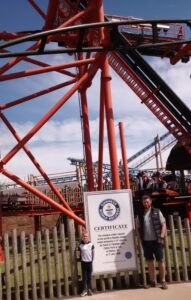 It is many many years since I visited a leisure park like Flamingo Land and I must say I was impressed. There was also a zoo set among the beautiful grounds of what once must have been a huge estate and manor house. We spent the whole day there and enjoyed a wide variety of options for lunch, which we ate outside in the sunshine. It was a lovely day out and shortly after we arrived home, Emma and Ash left to go to York for the evening and an overnight hotel stay. As it was their wedding anniversary and they don’t often get the chance to go out, I urged them to take advantage of my being there to babysit. 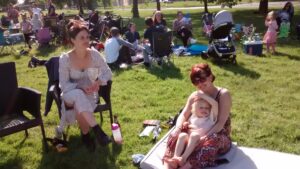 At the Platinum Jubilee barbeque held on the Military base

The next day, on the Saturday there was a big party and barbeque in the grounds of the Military base, held to celebrate the Queen’s Platinum Jubilee. Again we were so lucky to have good weather as the sun shone for most of the time.  Zoe, Rich and Arthur had travelled from the other side of Yorkshire to join us in the celebrations, which turned it into a real family affair. Aside from the free barbeque, there was a large bouncy castle for the kids, a brilliant play list of music and tunes that many got up to dance to and we brought along our own beer and wine to drink. It was a wonderful day and we stayed until well after 7pm. Zoe, Rich and Arthur were staying over so after we had put all the kids to bed – we continued the party, drinking and sitting around a fire pit in Emma and Ash’s garden, playing music and chatting all evening. 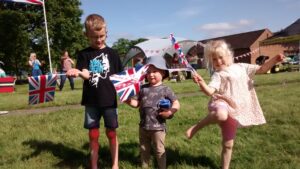 A couple of days later Emma drove us to a shopping centre in Leeds, where we met Zoe. Because the children were back at school and nursery, we had a totally free day of shopping which included a tasty lunch, enjoyed in the sunshine in the garden of Gino de Campo’s restaurant. Then I went back with Zoe to their house in Golcar. It was a shame because the weather was not as good in their part of Yorkshire. In fact I found it rather cold because it was so windy. However this did not stop us from enjoying some quality time together. Zoe had the whole week off work, which was great for me. We spent time shopping and actually did some gardening which I really enjoyed, having only pots to tend in Crete. I also got to play with Arthur lots and I babysat a couple of times so that Zoe and Rich could go out. Like Emma and Ash – they rarely have the chance to go out without the children.

At Ilkley Food and drink festival

On the Sunday there was a food and drink festival being held in Ilkley. Zoe and Rich had been to this festival many times before and this year Emma, Ash and the kids came along too and met us there. It was wonderful as I wasn’t expecting another opportunity where we were all together again. Live music from different bands played all day, giving a real festival atmosphere and there were more rides for the kids. Dozens of food and drink stalls of every variety were dotted all over this huge field including many more stalls and marquees selling all kinds of edible treats and crafts. But – in typically British style – the weather this time did put a dampner on things as it was so windy and there was no shelter on that open field! Strong gusts meant that food flew off our plates and drinks were whisked out of our hands, with the children getting all upset at one point. But hey – we all had a great time really and it did brighten up later on in the afternoon. 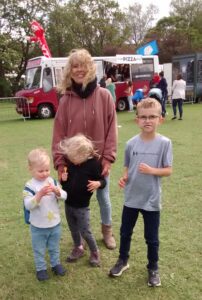 I really enjoyed my extra holiday in the UK and I intend to make this visit in May/June a more regular thing. I can’t and don’t expect my girls and their families to visit Crete every summer and if they can’t come, then I am only seeing my grandchildren at Christmas time. As it happens I have been really fortunate that Emma, Ash, Ralph and Neve all came for holidays here in 2020 and 2021. Zoe and Rich visited in 2020 but were unable to come in 2021. However this summer I am spoilt as Emma , Ralph and Neve are arriving for a week’s holiday on 21st July and are staying with me this time. Also Zoe, Rich and Arthur are coming over in September for two weeks, four days of which will be spent in Cyprus where Zoe’s best friend gets married. I will be looking after Arthur whilst they are there. So I have much to look forward to this summer. 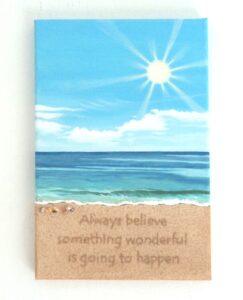 I was back selling by Almyrida beach again two days after I arrived home and am pleased that I sold 5 Seashell Mosaic Collage Paintings that day. Among them was the hugely popular design – “Always believe something wonderful is going to happen”. In only 5 separate days of selling this season – I have sold two of these already! And you know what? I truly believe that something really wonderful is going to happen this summer…..