I am back home again after a thoroughly enjoyable exhibition in the Old Mosque on Chania Harbour front. 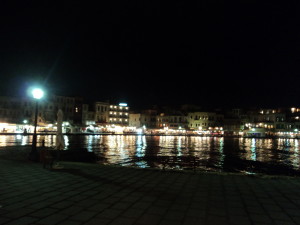 The days were filled with an almost constant stream of people from all over the world and, of course, plenty of Greeks from local areas, Athens and other islands. It’s great when I meet someone from my area of the UK and I can never help myself thinking what a small world it actually is. 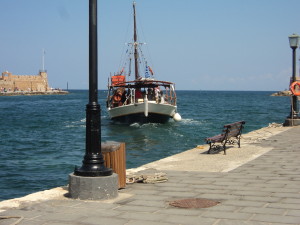 Boat trip – one of the many views from the Mosque.

As always, there were some memorable moments and one such event made us laugh so much afterwards!
Inside this really old Mosque there are chandeliers that hold dozens of bulbs, but the majority of them don’t work. They did not provide spotlights for above the screens either, as they had last year. Even though they had hiked the prices up again, they couldn’t even supply the first and basic need for any Art Exhibition – lighting! But hey, this is Greece! Luckily, during the day this was not a problem because we had constant sunlight streaming in through the double doors and windows. When it came to the evenings though, our paintings looked very dull.

So David called the Port Authorities (where we’d booked and paid for the venue) to complain. David speaks a little Greek but the Greek lady he spoke to misunderstood him and somehow mistook ‘lighting’ for ‘fire’!! Within 5 minutes of his call, some people burst through the doors looking panic stricken! We recognised them from the Port Authorities. Seconds later we saw a flashing police car followed by a fire-engine!
You can imagine the looks on our faces! We then had a heated exchange, trying to get them to see that it was a question of “lost in translation”. After they all left, David and I just burst into peels of laughter! Then 5 minutes later, another 5 firemen burst through carrying but one small fire extinguisher between them! Well as soon as they’d gone, we were in fits of laughter again!

I met a lovely couple from California, called Tom and Dee Dee. They purchased one of my larger pieces and told me all about Laguna Beach, an affluent seaside resort city and artists community in Orange County, California. They hold many Art Festivals and Tom and Dee Dee thought I could make my fortune, if I was ever able to exhibit there. Well… who knows? Maybe one day…
All things considered, it was another great exhibition, reaping plenty of sales. Now it’s back to normal and I am still playing ‘catch-up’ with a long “To Do” list that’s waiting to be ticked off.

Yesterday was my first day back at the Beach. Near to where I usually set up my stall there is now a kiosk for the ‘little train’ which takes people on little tours around the locality. There were 2 ‘no parking’ signs which were unnecessary given that the train would be parking alongside the cars. Anyway, I just didn’t see the point of them so I pitched up as usual. At 5pm along came the little train.  It parked up and out poured lots of tourists. A man jumped out of the driver’s compartment (He was obviously the tour operator) and said to me, “I think you will have to move.” I said, “Why? I am not in the train’s path or anybody’s way and if anything, I will attract more customers to your train tours.” He thought about this for all of 10 seconds and replied, “Yes, I think you might be right!”

So for about an hour I chatted to this man, Harry. He is Greek/American, speaks 10 languages (Really?) and has been a salesman all his life! By all accounts he has had a varied and colourful career. No doubt I’ll be seeing more of him on my Beach-selling days!
Though it is still early in the season and there are fewer tourists around, I met 2 families who remembered me from last year. It is always a pleasure to see people who have bought pictures from me in the past.

Today, a couple from the UK, Paul and Sheila, came to my home/gallery, to collect the 2 large 3-panel archways which they had commissioned me to do over the winter. What lovely people! They stayed for a couple of hours and I am invited to their 2nd home in Rethymnon next time they are over. That’s nice!

One thought on “Another Great Exhibition”