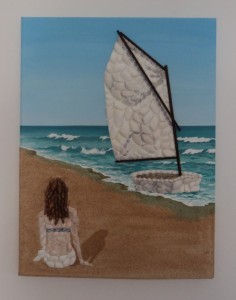 Following my successful exhibition in Chania I’ve gone back to selling by the beach in Almyrida. But like the previous two years, June has seen some pretty unsettled weather so far. I completely missed one selling day and the whole morning of another – due to heavy downpours! That said, it now appears to have stabilized and is back to normal with wall to wall sunshine again. Already I am meeting customers that return to Almyrida year after year, many of whom own holiday villas in the neighbouring villages. I came to know a lovely couple called Bryce and Lynne because Ian and I have done much decorating work on their beautiful villa over the last two years. When they were over in Crete earlier this year, they commissioned me to do an artwork of their daughter, Stephi and her ‘Opti Boat’. This proved to be quite a challenge as the boat is all white and therefore needed lots of subtle shading to bring it to life. Anyway, they have returned to Crete and are collecting the artwork from me tomorrow, while I am selling in Almyrida. I do hope they all like it as I am always a little nervous of people’s expectations. 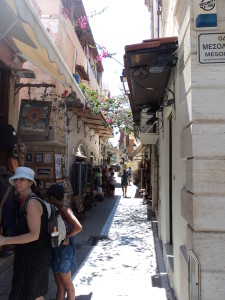 Browsing the boutiques in Rethymnon

While I have no visitors coming to stay with me I have been making sure that I take a proper day off on a Sunday and recently Nick and I spent a day in Rethymnon. I never go shopping and so, for a change we wandered around the pretty streets, browsing the boutiques and taking several breaks for beer, coffee and crepes, which I have a passion for! We also had an ulterior motive for visiting Rethymnon and that’s because we know there is a good Chinese restaurant there… and that’s exactly where we finished up at the end of the day! I adore Chinese food and the meal was absolutely scrumptious!

Last Saturday we found out that Matala Beach Music Festival was taking place all weekend and Nick persuaded me to drop everything, pack a bag and head down there! It is Greece’s largest International and free festival and thousands travel to Matala to enjoy the great music and atmosphere which we didn’t want to miss out on! However, friends we spoke to said that it was unlikely we would find a room for the night at such short notice and to play it safe, I packed some basics for sleeping on the beach – it would be an adventure! 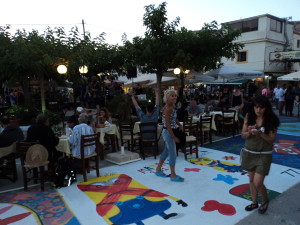 After driving for about an hour we reached the pretty coastal town of Agia Galini and decided to try our luck for a hotel room there. At this point we were about half an hour from Matala but struck lucky with a hotel that had just one room left. At 20 Euros each for bed and breakfast, we thought it was well worth it to get a nice clean room with en-suite facilities. After quick showers we carried on with our journey to Matala and queued to enter the vast free car parks. Of course the festival was already in full swing, having started on Friday and everywhere in the town there were so many cars and people. It was lovely to arrive there in the light of early evening and to wander around all the interesting stalls selling festival gear and snacks for every taste. All the streets of Matala have painted music murals on the pavements making them all the more vibrant and alluring. Some of the tavernas staged their own bands and I just loved the whole atmosphere of the place. We found a great taverna on the edge of the cliff overlooking the festival and I had the best steak I’ve ever tasted on Crete! 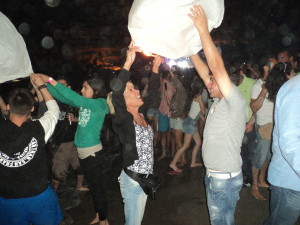 Launching a lantern on the beach

We followed the music, which featured many famous Greek tribute bands, onto the beach with the impressive Matala caves in front of us. Now in its fourth year, over 100,000 music fans have enjoyed this unique festival on the sands beneath these caves which were made famous during the hippie era of the 60’s and 70’s. Joni Mitchell’s song, ‘Carey’ detailed her experience of residing in these caves in the early 1970’s.  I wish I knew how to upload a video because Nick took some really brilliant clips of the bands and the jubilant crowds and you would be able to hear the fab music and sense the electric atmosphere.  Instead I have taken a screenshot, which is below and I am determined to replace it with a video clip soon.

Right there with the music and soaking up the wonderful atmosphere of Matala’s Festival!

I took a close-up photo of the caves but it is covered in little ‘spirit orbs’ – which is both strange and interesting but also a shame because you can’t see them as clearly. Walking on the long beach towards the epicentre and stage, we looked up to see lots of paper lanterns floating in the sky above us and as we neared I was given a lantern to launch myself! With the sand and the waves underneath my feet and the music and fantastic light shows – it was just magical! 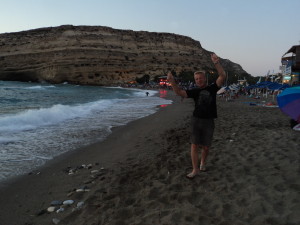 The other end of the beach, Nick in front of the caves with the stage in the distance. 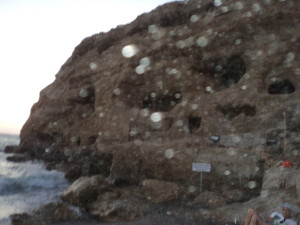 Up close & personal – my spooky photo of the Matala caves!

The following day we were shattered, having had very little sleep, but I wanted to visit the ancient site at Phaistos, which we passed by on our way from Agia Galini to Matala yesterday. I had already seen these ancient ruins with David’s walking group in 2010 but wanted to show them to Nick. Astonishingly preserved, the Minoan palace of Phaistos which was built upon deposits dating from the Neolithic and Early Minoan periods of between 3000-2000 BC, is considered to be of superb architectural composition and I could see this for myself when wandering around. How amazing that such splendour was built by man without machinery over 4000 years ago – I was in awe of the place! 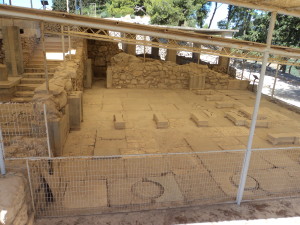 Part of the ruins of the royal apartments in the Minoan Palace.

We drove back to Agia Galini to have lunch at the port and then decided to take a look round and finally, to spend a couple of hours relaxing on the beach before the drive back home. When we arrived back in Almyrida we had a quick dinner in Maki’s Taverna and then I was so tired that I quickly showered and had a much needed early night because I had a very long day of selling the next day. I have another full weekend ahead to look forward to as I have been invited to two weddings – one on Friday so I will only be able to do a morning of selling and the other is on Saturday. Life is for living and so… bring it on!