It’s been hard work selling at the beach in Almyrida today. The strong Cretan winds returned with a vengeance, causing me, as usual, all manner of problems! However, I am not one for giving up easily and so I simply rose to the challenge. This time the sea was so rough that it flooded the whole area where I pitch up to sell. The waves crashed over and beyond the beach and the road alongside gradually filled with up to two inches of seawater. I had to keep moving my displays further and further up the road.
Thankfully, there was plenty of help at hand. Friends and tourists alike helped to move my table with display boards attached, along with all the other bits and pieces. Boxes that I store my canvases in, now filled with bubble wrap, my parasol and base and my kit bag filled with materials for working my seashell mosaics.
The process of moving further up the road, though, also presented yet more problems. As the seawater expanded further over the road, I was forced to encroach on the parking area for the little train! I was hoping to spot it before it pulled in, but was busy with a customer at the time and my plan for the train to pull up behind me was thwarted. The train parked up just short of my table and Harry jumped out complaining that he would be in big trouble if I didn’t move so that he would not block the tours desk which is set up at the other end. I told him that if the train moved back slightly, it could then pull in behind me, but was told quite categorically that the train could NOT reverse – the cables in-between the carriages would buckle and twist. Harry came up with the welcome solution that I should just move in front of the middle of the train, where it formed an upside down ‘V’ shape for my table and displays to slot into. It worked! At last, by 4pm I finally felt settled. It had taken all day to feel secure in the knowledge that I would not have to shift again! Halleluiah! 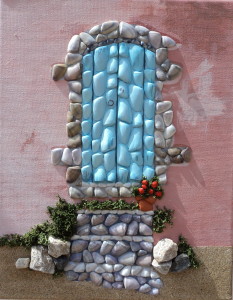 It just goes to show that sometimes the most trying of days can turn out to be the best. I did well today, selling 13 mosaics and collages together with the prospect of good sales for the day after tomorrow. A couple of tourists asked me to bring down some of my larger pieces for them to view. They had looked through my album and noticed pictures that took their fancy. 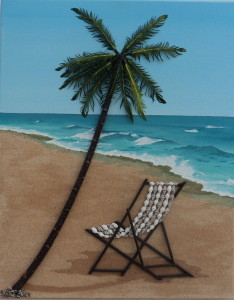 This is why it’s such a good idea to have all the work I do displayed in an album as I am obviously unable to bring every picture down to the beach. Only at an exhibition can I show everything I’ve produced.