The weather here on Crete has been amazing!  Week after week we’ve had abundant sunshine and warm temperatures and I have saved a small fortune on gas bottles and electricity this winter.  With all the sunshine we’ve been having I haven’t needed to use the immersion either and honestly, it hasn’t felt like winter at all this year! 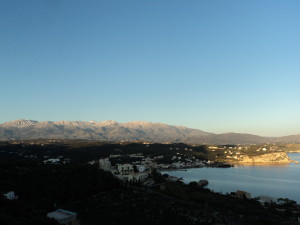 A stunning view of the mountains from my balcony – the top half of which are normally covered in snow!

However, we have suffered instead with even stronger and gustier winds than is usual.  March was definitely the ‘windy month’ with probably the strongest winds I have ever experienced here on Crete.  On 22nd March we had some really strong south winds which arrived in the evening and raged all through the night.  I hardly slept a wink for worrying about the possible damage it could be doing!  It was howling down the front side of my house and was so loud that sleep would have been impossible anyway.  The constant onslaught of the wind was punctuated with the odd crash.  I actually got out of bed a couple of times and ventured out to see if I could move any more plants to relative safety.  As if all this going on wasn’t bad enough, at around 4am, I was petrified when I heard several loud crashing noises coming from the roof above me.  I certainly didn’t dare go out to investigate and thought it must surely be the solar panel that had been ripped from its fixings and bounced all across the roof! 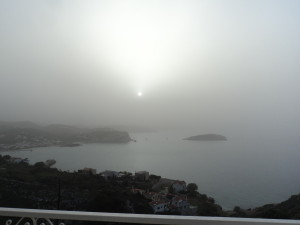 Eerie and surreal – but I don’t think this photo captures it. It would otherwise have been a hot and sunny afternoon!

The following morning the strong south winds were no less evident but I was determined to see what had caused the crashing noises.  Thankfully, all around the house seemed ok but as I leaned over the railings I saw an enormous old and rusty water tank lying amongst the stones and shrubbery at the far side of the house.  I am certainly experiencing the full force of nature here in my new home! That south wind raged for most of the day until about mid afternoon, when it died as suddenly as it had started.  But how strange everywhere looked afterwards because there was so much sand and red dirt in the air!  The sun was in a cloudless sky but everywhere was eerily misty and almost surreal – as if you were in another planet’s atmosphere!

On the work front I am back in full swing and busy setting up my own Limited Company.  This is something I have been meaning to do for a long time and makes me feel more secure in the business of creating and selling my unique seashell mosaics and collages.  Soon I will be selling on the beach again but for now I am still busy with building up my stock.  David and I are a little concerned about our exhibition in Chania because we had booked already by this time last year and still there is no sign of a date when we have to go and book it.  We suspect that it is because the Port Authorities are busy with planning the 75th Anniversary of ‘The Battle of Crete’.  They will use the Mosque for the celebrations and consequently, no exhibitions will be allowed during that week.   Still seems a poor excuse to me, if that is the case.  I am sure that the hiring out of the Mosque to artists all summer must bring in quite a good revenue – they certainly charge enough!

There has been much activity on the ‘Wedding’ front.  Emma and Ash’s wedding is now less than two months away and for several weeks the wedding planner and I have been trying to get permission to have the blessing outside a little Greek chapel in Kokkino Chorio.  There were so many hoops to jump through but finally I was told I had to visit the Metropolitan Church in Chania and speak to the Greek Papa’s there.  This also meant taking one of my Greek friends along with me to translate.  Yianni was brilliant and as a result I was finally given the go-ahead.  I suspect that most foreign weddings here on Crete are held on beaches and in private grounds or hotels because there were no clear rules on what you had to do to have the marriage ceremony inside a Greek chapel.  As it turned out, sadly, we could only get permission for outside the chapel. But I think it will be just as special as the surroundings of St George’s Chapel are just stunning!  Also many of the small Greek chapels have outdoor seating almost like an arena, because many Greek services are held outside the chapels.

Another important detail that I really had to address – and quickly – was the outfit I would be wearing for the wedding.  I never realised the ‘Bride’s Mother’ was such a key figure at her daughter’s wedding!  I had something roughly in mind but was sceptical about finding the right dress here on Crete and time is running out!  Luckily my friend Jackie was free to come shopping with me and last Friday we went into Rethymnon, where I’d been told I would have more choice of boutiques and wedding shops.  After three hours of trekking all over Rethymnon, I finally found what I think is the perfect dress after Jackie convinced me it was!  Now all I need are the accessories – shoes, bag and hair decoration.  It is a big weight off my mind as time has been so short for me these past few months. 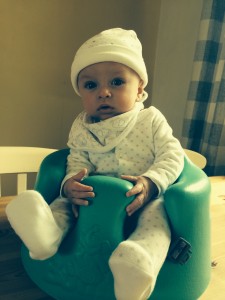 Now I am happily starting to prepare for the most important guests in the world to me!  I am so thrilled that Zoe, Emma and my gorgeous Grandson Ralph are going to be the very first guests to stay in my wonderful new home.  They arrive in just under a week and I have heaps I want to do before they get here.  I have been looking forward to their visit for months.  We will spend much of the week having meetings with the wedding planner, priest and photographer, but Zoe and Emma both want to take full advantage of the sun and get some healthy colour on their skin after the long British winter!  As for me…. well all I really want to do is to play with cute little Ralphie!