I had the most wonderful time during my recent 3 week visit in the UK. I love, love, loved every minute of it! I was based at Emma and Ash’s cosy home in Helsby near Frodsham, a beautiful rural area near Chester. I couldn’t believe how much baby Ralph had grown and all the things he can do now! And he’s just soooo cheeky! I was totally amazed by how much Ralph progressed during the weeks I helped look after him and I took some wonderful videos of him which I can watch whenever I’m missing him and can’t Skype with Emma. 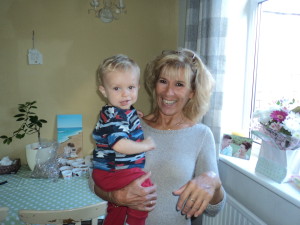 Ralph and I at Emma & Ash’s home in Helsby

As his doting ‘Yaya’ I am besotted with Ralph and feel so lucky to have had such quality time playing with him. I was absolutely enthralled with just watching him while he discovered new things he could do. Of course – as with all babies – his curiosity and excitement in absolutely everything is a joy to witness so closely! Quite simply – I enjoyed a priceless three weeks of wonderful happy experiences that I shall always treasure.

The first weekend with Emma and Ralph, Zoe was able to join us and the four of us enjoyed a leisurely Saturday lunchtime at a charming cafe within a quirky gift shop in Helsby village. 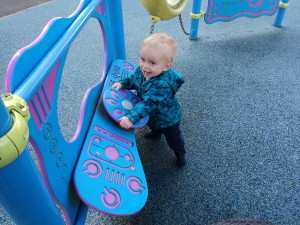 Ralph playing on his favourite steering wheel at the local children’s park in Helsby.

It had a play area at the back and Ralph loved it! Afterwards we visited the local children’s park where Ralph had an absolute ball! He was crawling all over the place – from one thing to another to end up back at his favourite steering wheel! The sounds and noises he makes when he’s excited are hilarious and exciting at the same time. Zoe, Emma and I just loved every minute of watching and playing with him. Wow, did I get some exercise in – especially going up Emma’s steep stairs with Ralph in my arms, several times a day! I am not used to stairs anymore, having lived the last seven and a half years on one level. 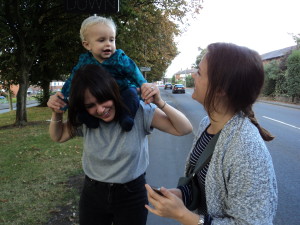 Ralph on Zoe’s shoulders and with Emma

During the first two weeks Emma had several appointments to attend at the hospital and health centres, in connection with her shoulder operation and Ralph’s routine checks. I had previously voiced my concerns about driving in the UK after so many years of driving on the opposite side of the road on Crete. The sheer volume of traffic in the UK these days scared the very wits out of me! I know I’m a wimp but I have the added responsibility of carrying my daughter and grandson in the car, in an area I wasn’t familiar with and I was not feeling confident about the whole thing! However, I gave it a whirl and it wasn’t as bad as I thought it was going to be. It really helped that Helsby and the surrounding areas were more rural and much less built up and that the times I drove were all outside rush hours. 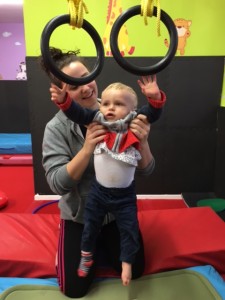 But I still had some scary moments when dealing with the heavy traffic and horrendously complicated roundabouts in Warrington. Emma, Ralph and I spent an afternoon at Warrington Gymnastics Club which my sister Karen and nieces Sophie and Hannah help run. The timing was perfect because none of the classes were on and so we virtually had the place to ourselves. You cannot imagine what an incredible play area that was for Ralph! We plonked him in the middle of an enormous soft and spring-loaded bright red floor area – which was scattered with a few blown up tubes and brightly coloured objects, including a baby walker. It was an endless space for him to charge around with the walker, without bumping into anything! Ralph soon made a beeline for the large boom box that was in one corner – standing up against it while instinctively swaying his hips to the beat and making us all laugh! He loved it when Sophie and Hannah (his second cousins) jumped on the trampoline with him in their arms. He watched Hannah – a double Olympian – do a high somersault from the trampoline into an enormous pit full of foam blocks! Wow! It was all so worth the horrible driving experience in Warrington! 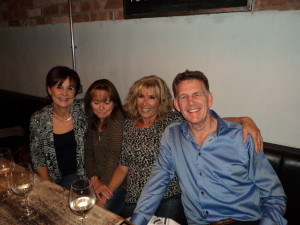 After our meal at Mercato – with my sisters, Karen and Leonie and brother-in-law, Mike

At the end of the second week at Emma’s, Ash was granted leave to come home for the weekend and I returned to Karen and Mike’s, to give Emma, Ash and Ralph some family time together. Ash was more than capable of looking after Emma and Ralph and it meant I could have some quality time with my sisters Karen and Leonie and brother-in-law, Mike. For the Saturday evening, Mike had booked a table at Mercato – the new Italian bar and bistro in Bramhall. We had a great evening because there’s always so much to talk and laugh about. So when we’d all finished our deserts and coffees we continued the party spirit back at the house, with all our favourite music and some downright daft dancing!
On the Sunday teatime – Karen, Mike, Leonie and Sophie came back with me to Emma’s and we all shared a late Sunday roast together at a pub restaurant close by. Ralph in his little wooden highchair, sitting at the top of the table – was the star of the show again! 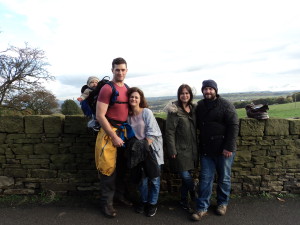 On our lovely country ramble – Ralph sits in his chair on Ash’s back, with Emma, Zoe and Rich

The last week was even busier with Ralph as Emma had to work from home. She is not allowed to drive for another three weeks but does not need to wear the sling anymore. She is gradually gaining strength in her shoulder and arm with physio and daily exercises. So on my final weekend it was great that Ash was again granted leave to come home and he drove Emma, Ralph and Me to Zoe and Rich’s new home in Huddersfield to stay for the weekend. Ash had bought a second-hand child-carrier – the type you see on the backs of serious walkers. Well Ralph absolutely loved being up high in this chair, when we all went for a long walk through the countryside, stopping at various country pubs for refreshments along the way. We ended the day at a favourite restaurant of Zoe and Rich’s, where I enjoyed one of the best steaks I’ve had for ages! 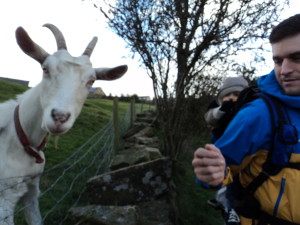 Couldn’t resist putting up this picture I took of a very photogenic goat – posing for the camera with Ralph just peeking behind Ash’s shoulder!

On Sunday we visited a large old Victorian park and spent a few hours there, playing with Ralph and even trying out some of the children’s apparatus ourselves! By late afternoon we were enjoying coffee and cake in the huge conservatory that had been converted into a cafe within the park grounds. Then we returned to Zoe and Rich’s house for a slap-up Sunday roast expertly cooked by Rich! It was a great weekend and a lovely way to end my three week stay in the UK – with all my closest family around me! By Monday evening I was back at Karen and Mike’s in time for my flight back to Crete on Tuesday morning, from Manchester Airport. 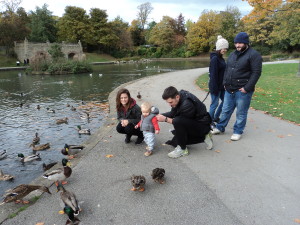 At the Victorian Park with the ducks – Emma, Ralph, Ash, Zoe and Rich

I’ve been back home in Crete now for several days and have had much to pick up and continue with, such as the final tweaks to my new Etsy Shop, which officially opens in a couple of days on 1st November. Here is the direct link to the shop:

There have been many more matters to pay attention to – not least of all – my car! It needs a service, MOT and has other problems that worry me. There’s also a very personal matter that is demanding my time and energies and I will talk about this in a future post. Let’s just say that I’m hoping some extremely good news will come out of it!

After such a packed three weeks of quality time with my grandson and underneath all that’s going on now, back home on Crete – I am missing Ralph sooooo much! 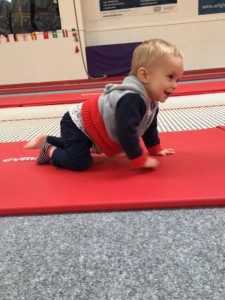