Despite all the awful consequences of this Covid Pandemic, I have had such a great summer.. that the bubble was bound to burst at some point! For the last few years October has always ended up being a month for sorting problems out and this year was no different. But always being positive by nature, I’m not even going to mention what these problems were. There is no need to because I have resolved them all and anyway, I have far nicer things to talk about! 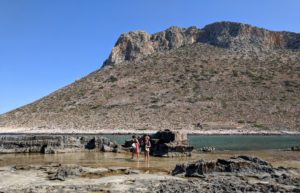 Fascinating Stavros with the famous ‘Zorba the Greek’ mountain backdrop

For most of October the weather here on Crete has been warm and sunny and just perfect for beachcombing. Lisa, Debbie and I have had 3 recent beachcombing trips which were all fabulous days out.  We visited beautiful Falasarna first and although the large main beach was bereft of any seashells, the beach further up the coast yielded a bounty of different seashells, driftwood, sea glass and more. In fact there was so much to discover and collect that we stayed on the beach until it was going dark, when we were finally forced to leave! 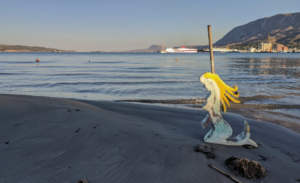 On the way back from Stavros we stopped at a beach in Souda and found a mermaid!

The following week we visited Stavros but here we found very little in the way of seashells. This is quite unusual for Stavros as all my previous years of beachcombing there, have always yielded a good bag full of seashells. Nevertheless, Stavros is such an interesting place with its ruins emerging from the sea and which we discovered were not the ruins of an ancient village but rather where the sandstone had been quarried from. So Lisa, Debbie and I enjoyed our day out just as much because our beachcombing days are just as much about exploring what we come across as they are about collecting sea treasures from the beaches. 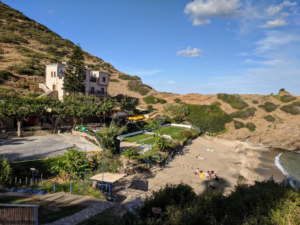 Further along the precarious coast from Bali – we discovered a beautiful almost private beach.

For the next week we chose Bali and the lack of seashells was also apparent on all 4 of Bali’s beaches. So we turned the day into another exploring expedition and found 3 more small beaches and coves, tucked between the rocks further along the coast – places we hadn’t been to before. Some of these beaches were not pleasant to drive to. In fact it was quite scary in some places where the road had no barriers at the side of a steep sheer drop down to the rocks and sea below. Luckily this is Greece and so there was no traffic, which meant I could drive in the middle of the road – very slowly! As always, we had a fabulous full day out and as it happens, Bali turned out to be good for collecting the small grey pebbles I needed for a new design I am working on. 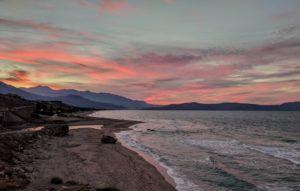 Debbie took this stunning photo of the sunset, as we were leaving this last beach on the way back from Bali. Right at the far end of Georgioupoli.

Now we are back in lockdown here on Crete and this means we can’t go beachcombing for at least 3 weeks. This has got to be the single worst aspect of lockdown for us as we all love exploring Crete’s beautiful and amazing coastlines.

Most of my time in October was taken up with things that went wrong or had to be sorted, but I was desperate to get back into my art and creating more seashell mosaic collages again. Because I didn’t have a normal summer of selling and producing, I felt as though I had ‘creative-block’ or ‘artists’ block’ – like writers occasionally have. But now I am happy to say that I am back into my art and currently working on some new ideas. I’ve also begun work on one of my winter commissions. 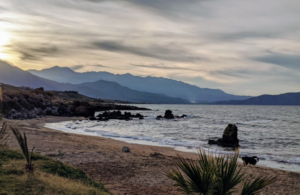 Another beach at the far end of Georgioupoli that we explored on the way back from Bali. Another stunning photo from Debbie too!

Another important activity that had been placed on the back burner for many weeks was my keep fit regime, which I had to change anyway. I have always meant to take up Yoga regularly and as luck would have it; my friend Debbie has been doing Yoga for years. Even better – she recently moved to Plaka and I can walk to her apartment in 5 minutes. We are round the corner from each other and so I have been learning all the movements so that I can practice at home too. I’ve also started to walk more. I’m usually so busy and in such a rush to hop into my car to the shop or wherever.. when these places are close enough to walk to! Then there’s my power walks.  This morning the sun was shining and it was so warm that I went for a long walk all around Almyrida and then back uphill to Plaka. I even managed to pick up a few shells from the little beach in Almyrida, including some really rare and special purple seashells that we also found plenty of at Stavros. There is only a small window of the year when these gorgeous seashells can be found on the beaches of Crete. So talking of beachcombing again – I am getting plenty of healthy exercise on our beachcombing trips. 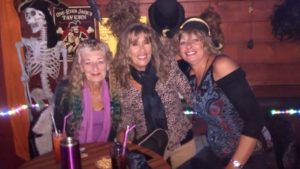 Last night before lockdown and celebrating my Birthday with Lisa & Debbie

Not much has been happening on the social front, apart from drinks in Vamos for Lisa’s Birthday, an ‘open mic’ night at Totem in Plaka and my birthday. All I felt like doing to mark the occasion, was having dinner somewhere in Almyrida and then a few drinks somewhere afterwards. But lockdown was suddenly announced and so I met up with Lisa and Debbie in Almyrida on the last day we were allowed out. We had a nice meal in Psaros and then ended up at Captain Jack’s for drinks as it was the only place open and even then – only til midnight. This has been the law all through summer too. It was reasonably lively in there, obviously – it being the last night everyone could go out. We had such a giggle that night! As for my actual birthday, I spent all that Sunday at home chatting on WhatsApp or Skype to Family and friends. It was lovely. 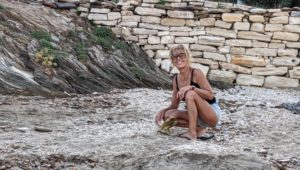 I did have an interesting night a few weeks ago when the weather took a real turn for the worst. It started with a few days of heavy rain, followed by a big storm. Debbie’s friend Ross (whom I’d met a few times before) was over and as she‘d recently moved to Plaka, we’d planned to eat and then do a mini ‘taverna-crawl’ so that they could get a real feel for the village. I still don’t know why we went out that night because it had been raining and thunderstorming all day! By the time we met up in the square it was so bad that we were forced to dive into Vangeli’s for shelter! We decided to order some food here and were perusing the menu when the storm appeared to reach its height and the thunderclaps became deafening and actually quite frightening. Of course all the electricity went off and so we couldn’t eat because they couldn’t cook! So we only stayed for a couple of drinks and to catch up with other friends in Vangeli’s. To be fair – we all love a good storm here.. but I’d rather have watched it all from my balcony. That night the lightning struck a telegraph pole in Plaka square and set it on fire!   For two days afterwards, most of Plaka was without electricity or water. I was lucky as I had both! 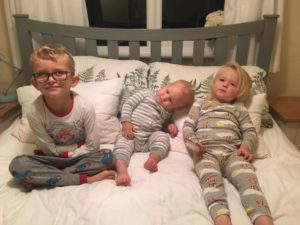 My wonderful Grandkids! I do miss them!

It has been so difficult to decide what to do about booking my flights back for Christmas. At least now the UK has removed Crete from the dreaded list, I won’t have to quarantine when I get there. But I now have to go back to taking 3 flights to reach Manchester. Aegean cut their usual direct route from Athens to Manchester and I now have to fly via Amsterdam. This means doubling my journey time and makes things more complicated because I will be using two different airlines. You cannot book a check-in bag online but must pay at the check-in desk on the day you depart. So this makes it more expensive. Also KLM have already cancelled one of my flights and this has affected the others. This is no easy time to travel but I cannot imagine spending Christmas without my Family and if Zoe, Rich and Mark all managed to visit me on Crete this summer, then I must try my best to visit them in the UK, as I have done every year since I moved to Crete.  I just have to carry on believing that somehow I will get there. 🙂