So it’s a brand new year again and here on Crete, 2022 started so beautifully with bright blue skies and a temperature of 18 degrees, the snow was shining on the mountains and the waves were gently lapping onto the shores of Almyrida Bay. After the New Year celebrations, I knew a brisk walk would do wonders to counteract all the drinking I’d done the night before.. and it really was reviving and invigorating. 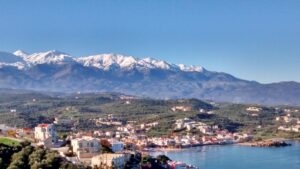 Zoomed in view from my balcony on New Year’s Day

Our original plans were scuppered when at the last minute the Greek government banned all live music so instead of the live music event we had booked to go to in Vamos, twelve of us sat down to a large meal at 7pm in Taki’s taverna in Plaka. Just before 11pm we crossed the square and saw the New Year in at Vangeli’s, with a lovely fireworks display and I didn’t walk home until well after 2am. We all had a really good time despite the absence of live entertainment or any dancing. Last New Year’s Eve Greece was in lockdown as was the UK, where I spent it at home with Zoe and Rich after my return flights were cancelled. Therefore this was a big improvement on last year for everyone on Crete. 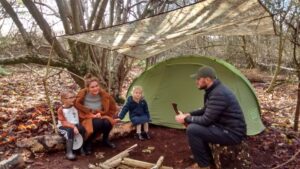 The Campsite in the forest – all ready for the evening! 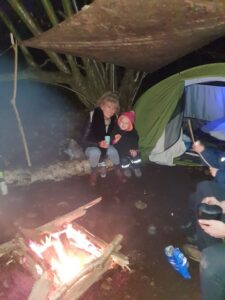 My trip to the UK was yet again – truly wonderful! Apart from all the paperwork and tests to organize, my journey was much better than last year. I spent the first few days at Karen and Mike’s in Bramhall, the first two of which were spent in quarantine until I received the all clear on Saturday morning. My dear friend Gill called round in the afternoon and it was great to spend a couple of hours catching up as we never got the chance last year. In the evening Karen and Mike took me out to dinner to the Crown & Conspirator in Bramhall Village with their friends David and Deborah. I was surprised at how busy it was and we struggled to secure a taxi home. On Sunday morning my friend Ange and I walked to and all around Bramhall Park, stopping for lunch in the café there. It was good to get out in the fresh air for a few hours when it was so bright and clear for a change, instead of dull and miserable. Later that same day, Emma arrived with Ralph and Neve and stayed for a takeaway tea. It was lovely for them to spend a little time with Karen, Mike, Sophie and Hannah as it’s been a long while between visits. After tea I went back with Emma to their home in Thirsk, Yorkshire where I was going to be staying for a week. 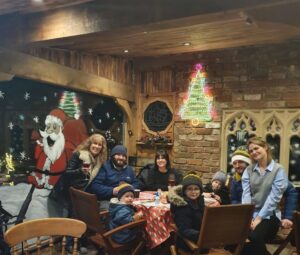 All of us at the fabulous Christmas event at Burtree Country House in Thirsk, Yorkshire

Among the highlights of the week was a walk into the forest opposite Emma and Ash’s home on the base, where Ash and Ralph planned to camp out for the night. Emma, Neve and myself joined them later when we followed the trail of lights they had left for us through the forest to find the fire and their campsite. We sat on large logs, drank wine and toasted marshmallows and it was so lovely with the full moon shining through the trees, stripped of all their leaves and lying like a soft carpet on the forest floor. Just magical. 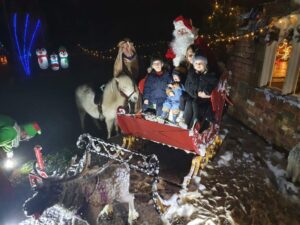 On Santa’s sleigh. They switched off the snow machine because you couldn’t see anyone through the blizzard!

Another magical and memorable evening we all had together was at a special Christmas/Santa event held at Burtree Country House in Thirsk.  Zoe, Rich and Arthur had arrived at Emma and Ash’s on the Saturday afternoon and after an early tea we all set off for the half hour journey there in the thick fog. What a reception we received! The owner of the estate greeted us warmly and led us to a large sleigh with Santa and many other people gathered around, all dressed up and waving to us whilst the snow machine had created a very realistic effect and Ralph, Neve and Arthur’s eyes almost popped out of their heads! It was snowing here!
The whole scene was so enchanting and I couldn’t believe there were no other visitors to this event. Was this all just for us? I believe it only cost 15 pounds per head for the 3 children (to include present from Santa) and 5 each for the adults! We were shown into a large warm barn and given mulled wine and little home-made cakes. The children were seated at a large table with paper, paints, glitter and all manner of Christmas themed crafts to keep them amused while we enjoyed our mulled wine. Then a short walk took us to another barn and Santa’s grotto. Ralph, Neve and Arthur were able to feed the reindeer, hold a real lamb, talk to Santa and then sit on the large sleigh with him. 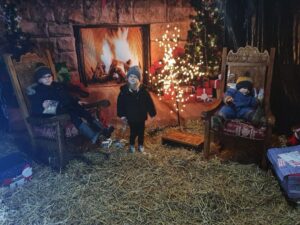 All the children at Santa’s grotto

They also enjoyed a donkey ride, where the man leading the donkey looked like Joseph and straight out of a nativity scene, dancing at a mini disco with a bubble machine and there was even an outdoor cinema, which mesmerized Ralph for a while! All the grounds were beautifully lit up and we spent over two very enjoyable hours there. I spoke to the lady of the estate to ask why such an enchanting place was so quiet and she explained that after the UK government had made an announcement on the TV about Omicron the night before – everybody had cancelled! I simply had to go into all these details because I just cannot believe how frightened the governments of the world make people feel?!! That people should cancel an open-air outdoor event such as this! All I can say is that it was their loss and absolutely our gain to have had such a personal experience at what was undoubtedly a real value-for-money magical Christmas event for all the family. 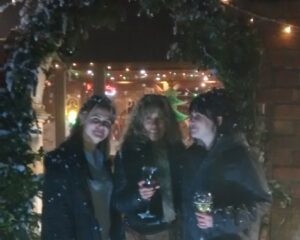 With Ash looking after the kids, Emma and I also got a chance to shop in York one day and this was great for me as I had a list of bits and pieces to get – items I cannot get in Crete. I so enjoyed my wonderful week at Emma and Ash’s and the next day I went back with Zoe and Rich and Arthur to the other side of Yorkshire to spend Christmas with them. Last year we were all together but every other year Emma and Ash go to Shrewsbury to spend Christmas with Ash’s parents. As it turned out, we had a bonus day together when Emma, Ralph and Neve met Zoe, Arthur and myself at a soft play centre on the Tuesday and we all had lunch there too.

For the next two days I was home alone as Zoe and Rich both had to work and Arthur was at nursery. I went for a long walk on one of those days, wrapped up pressies and read lots too. On Christmas Eve I had Arthur all to myself and in fact the majority of the days I was happy just playing with him. We stayed home for most of the time and Christmas day was quiet but really lovely. I say it every year but Rich is a superb cook and Christmas dinner was truly amazing again, with so many extra little touches that made it all fabulously tasty! To be honest we had a really quiet and lazy Christmas this year, only venturing out for a walk on Boxing Day as it had snowed a little and was at least crisp and dry instead of wet and miserable.  Like my stay with Emma, Ash, Ralph and Neve – I had such a wonderful relaxing time with Zoe, Rich and Arthur.  Christmas in the UK with family truly is my best holiday of the year! 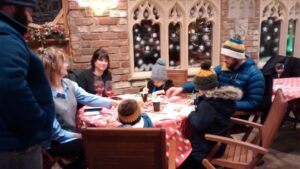 Three weeks has just flown by and all too soon it was time for my return journey early on 29th December and at least this time my flights were not cancelled, although it was a struggle to book a covid test for the right time for re-entry to Greece. I am still missing all my family and my grandchildren madly but at least the beautiful weather here on Crete these past 3 days has helped to distract me and yesterday I had a gorgeous 3 hour walk on all of Kalyves’ beaches, collecting many seashells along the way. Sadly though, I came across a large dead sea turtle, half buried in the stones.  It looked as though it had been flung onto the far beach after the heavy rainstorms we had just before New Year. So so sad… I think this is a rocky part of the shoreline that is dangerous for straying turtles perhaps caught in the current, because about 10 years ago I came across another dead turtle in much the same place.

But hey – not wanting to end this post on a sad note, I am wishing for the end of this awful pandemic.. and much love, peace and joy for all of humankind in 2022.